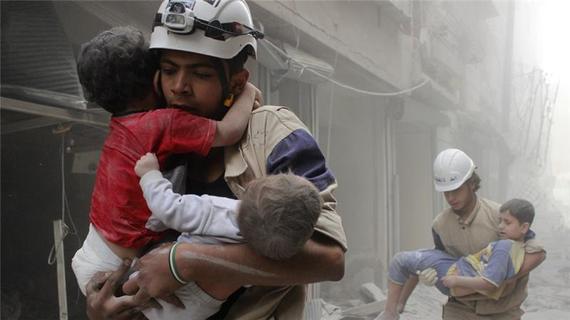 During three full days in September 2005, 170 U.N. member states gathered for an extraordinary summit meeting at the U.N. headquarters in New York to assess the state of international development in the world. Once the summit was over, all of the member states in attendance agreed to sign a document entitled the World Summit Outcomes that had a dramatic impact in how the world views the people who order and carry out the most serious crimes.

For the first time since the founding of the U.N., the Responsibility to Protect (R2P) doctrine was incorporated into a summit declaration. From here on out, according to the tenants of the R2P, the international community would be empowered to take the extreme route of intervening-- militarily if necessary -- if a member state was either unable or unwilling to protect its citizens from crimes against humanity, war crimes, and genocide. The U.N. Charter's core tenant of respect for state sovereignty would now be subordinated in specific cases to the protection of civilians who are under danger from their own government.

As the Syrian civil war has increased in brutality, proponents of a more aggressive policy against the regime of President Bashar al-Assad have begun to use the Responsibility to Protect doctrine (R2P) as justification for action. The deadlock over the conflict in the U.N. Security Council between western members and Russia over the past five and a half years -- a French proposal to refer the Syria case to the International Criminal Court for possible investigation and prosecution was defeated in 2014 -- has added to the urgency of many humanitarians.

However, when we assess the utility and effectiveness of R2P to the Syria situation or any other situation in the future, we cannot ignore how the doctrine has too often been misused and taken to its extreme -- the removal of governments by force of arms. In fact, the R2P throughout its history has become something much different -- a universal code for overthrowing sovereign governments, but couched in humanitarian and moralistic language. On the many instances where the Security Council decided to include the doctrine in its resolutions, military force has been used just as frequently to forcefully dismantle an administration and (attempt to) replace it with a new one.

The 2011 NATO intervention in Libya is the most recent example of the Security Council signing off on an internationally-blessed civilian protection mission that was in all actuality a regime change operation by the gun. "Reiterating the responsibility of the Libyan authorities to protect the Libyan people," the Security Council resolution authorized the international community to defend civilians in Benghazi who were at risk of being killed by the forces of former Libyan strongman Muammar al-Qaddafi. The use of kinetic force and airstrikes on Qaddafi's troops, artillery, and air defense equipment were all undertaken in order to create a no-fly zone that would provide people on the ground with some measure of protection from Libyan air and ground attack. Eight months after Qaddafi's forces were driven back from Benghazi and forced to retreat, the Security Council resolution was leveraged by Washington, the U.K., France, and Arab powers to not only extend the mission but to assist rebel units in the field in their drive towards Tripoli. Eight months after the intervention began, Libyan rebels would do just that; Tripoli would fall in August and Qaddafi himself would be captured and executed in October -- all under the cover of the Responsibility to Protect doctrine.

U.S. officials in years past have also cited R2P to help justify the urgency of deploying America's immense military power against a foreign government. Writing in the New York Times, Richard Perle reminded readers that Iraqi dictator Saddam Hussein was a menace to his own people and a madman that needed to be taken out before he did any more damage to his country and his region. Removing Saddam, he wrote, "would be met with dancing in the streets" and would send a message to other autocratic governments in the Middle East that tyranny and torture is no way to rule your citizens.

Three and a half years before that article was written, President Bill Clinton signed the Iraq Liberation Act of 1998 that made it official U.S. policy to overthrow the regime of Saddam Hussein and replace it with a new government that was democratically elected by the Iraqi people. The legislation made it clear that Saddam's use of chemical weapons against the Kurds in 1988 was one of the reasons why regime change in Iraq was an appropriate U.S. policy -- an argument that supporters of the R2P doctrine could support on humanitarian and human rights grounds.

The Bush administration's case for war against Iraq in 2003, although dependent in large part on the need to shut down Iraq's supposed weapons of mass destruction programs, also had a humanitarian dimension. In public speeches, committee hearings, and interviews, administration officials and President Bush himself consistently drilled home a point that was highly appealing to proponents of R2P; Saddam Hussein as a mass murderer, an abuser, a torturer, a overt danger to his neighbors, and a man who used chemical weapons multiple times both against the Iranians and against the Kurds. These are precisely the kinds of crimes that the R2P doctrine is designed to stop, and supporters of the invasion of Iraq recognized that using a human rights angle would bolster their case.

Five years after civilian protection was specifically included as a rationale by the Security Council to remove Muammar al-Qaddafi, the R2P doctrine is being used along the same lines today to remove the Assad regime. The reason why humanitarian considerations are being cited by advocates for a more interventionist policy in Syria is obvious; like Qaddafi, Assad is responsible for heinous crimes, including but not limited to bombing all kinds of civilian targets, withholding food and medical supplies to starve rebel areas into submission, and the conversion of jails and interrogation centers as execution grounds. All of these actions -- war crimes, crimes against humanity, and ethnic cleansing -- are against the Geneva Conventions and are crimes that the R2P doctrine was created to stop.

But we shouldn't be under any illusions. When taking the entire history of the R2P into account, the doctrine is as much about removing governments in order to protect civilians as it is about stopping the bloodshed in the first place. And as we have seen in Iraq and Libya in years past, stopping the bloodshed inevitably drifts towards the more expansive and ambitious objective of overthrowing a government through by military means. Unfortunately, in too many cases we have seen the intervention prolong and exacerbate suffering and post-conflict phases only breeding more death to the civilians the international community hoped to protect.

There may be times when genocide is taking place and when all diplomatic or non-military options are exhausted. In that specific case, the question of intervening militarily to avert a systematic crime and preventing an entire group of people from being killed through an international coalition is an appropriate one to consider. But U.S. policymakers must keep recent history in mind: is most situations, a call to protect civilians is a stepping stone towards a more elongated, ambitious, militarily intensive regime change effort that will require intense financial, diplomatic, and security assistance years after a brand new government is created.