How the hell did I make a feature film with no experience?

In some interviews, I answered, "Blind naiveté." In some I said, "Drive and passion." Some I answered with, "I had the best cheerleader one could hope for."

All of these are true. However, at the end of the day, the answer distills down to a simple: I had no choice.

I am obsessed with the mechanics of acting. This has been the case since I was seven years old. So when I graduated NYU and hadn't hit Jennifer Lawrence sized success within the first five years, I was shocked, angry, annoyed, befuddled, depressed, bored and many more of those types of adjectives.

Seven years after graduating, I met my boyfriend (I call him my partner) and he told me what they told us in college almost weekly: Make your own work. I never did it though. Not sure why.

By the time my partner sat me down and gave me a truncated course on no-budget (low low low budget -- the kind everyone tells you the film can't be made for) cinema, I was at the point of either making a film or leaving Los Angeles (I'm a NY kind of gal). And if I was going to leave LA, I had to [at least] make a film so I could say, "I gave it everything I had."

Did I want to write? No.

Did I want to direct? No.

Produce? Edit? No and no.

But I had no choice.

The aforementioned jobs adopted me out of necessity. In seven years, no one hired me as an actor (with the exception of mensch, Bob Daily), so I'd hire myself. However, if I wanted to hire myself, I had to become most of the players on the team to get the job done.

Staring at my blank computer screen, I remembered a teacher pontificating, "Write what you know." I didn't fancy myself a writer, so I took that advice a step further. I wrote what I knew, for people I knew and for places I knew I could access. Those three things informed my writing process.

"I wanted my voice heard, and I was willing to do whatever it takes."

I wrote the film (using a PDF, "How to Write a Screenplay in 10 Days" -- yes, I wrote the first draft in 10 days), sent it off to a few seasoned friends for notes, applied the notes I agreed with, and asked people I believed were right for the roles if they would be in the film.

Despite many people bringing to my attention the feat I accomplished (juggling multiple jobs to make it happen), I am aware a feature film takes a village. You need people who will help make your story a reality. Make sure these people believe it can be done, regardless of whatever lack you may encounter. Don't let anyone tell you no. Or if they do, move on.

I met several people (after the script was finished, I assembled a small team to help me get the film "in the can") who told me I needed X amount of crew and X amount of dollars. Most people I met were convinced there was one way to make a no-budget feature film, their way. Truth is though, there is never one way to do anything, and I just didn't have the X amount of dollars these people thought I needed. 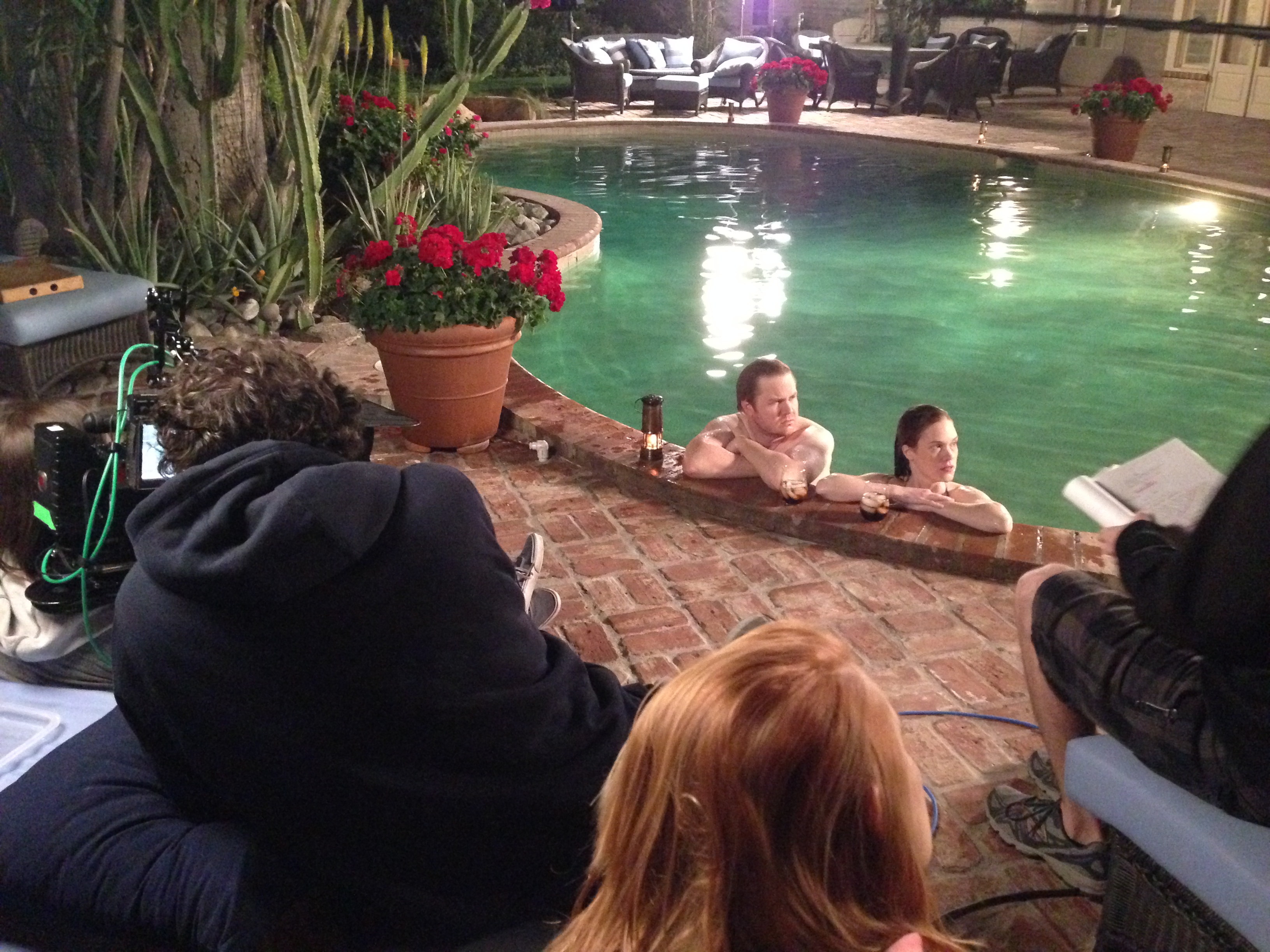 Josh McDermitt and Katharine Emmer in between takes.

Thank goodness I found a small group who were willing to bend, be in the moment, be flexible and saw this as a ride they were excited to be on. Yes, when we didn't have a slate person (2nd AC), one of the actors in the scene slated. When we didn't have a DIT person (they transfer footage onto a hard drive), someone already doing three other jobs stepped in and did that. I ordered food for people in between takes. When the buzzer went off, we cut the take, I signed for the food and most likely the makeup artist put lunch out for everyone.

If I listened to the people who said I couldn't make the film without X, Y and Z, there would be no film.

I dislike the phrase, "If I can do it, you can do it." It somehow cheapens the process. As if to say, "Who am I to be good at anything? So you can at least match that. Surely, you can." However, I like the sentiment behind it.

If I can do it being a nobody, moving to LA without a trust fund, having no independent film connections, no film school pedigree, and no previous experience behind the camera, then it truly is possible.

I never had the dream to be a writer or a director or anything else I learned to do on this film. I just wanted to act. But no one was giving me a job. I wanted my voice heard, and I was willing to do whatever it takes. I remember someone once said they were going to accomplish something or die trying. That's what it requires to make a movie.

Many people told me this film could not be done the way I did it. I didn't listen to them and neither should you!

20 key takeaways from a first-time filmmaker (who never went to film school):

1.) Be passionate about your story. You're going to be with it for years.

2.) Be open and willing to apply feedback from people whose opinion you trust.

3.) Surround yourself with people smarter and more experienced than you.

4.) Write for people you believe in.

5.) Exercise and/or meditate. It clears your mind and opens you up creatively. It also gives you inner peace to handle what comes your way.

6.) Don't wait for anyone to do it for you. Do it yourself. No one cares more about it than you and everyone is running their own race.

7.) Find that one person who will tell you everyday, "You can do this." Even though it's always good to have inner strength, you will really be tested on no-budget filmmaking, and it is more than helpful to have someone supporting you every step of the way.

8.) You can't please everyone.

9.) Be gracious and thankful.

10.) Work with people who are kind, professional and above all not a diva. I learned this the hard way.

12.) Work with people who are driven and focused. There is simply no time in no-budget filmmaking not to be focused.

13.) Be flexible. We lost a location 8 hours before we were supposed to shoot there. A nameless musician paid $800,000 cash for a condo with no view! And escrow closed in 4 days rather than 45. The realtor waited until 8 hours before to tell us this. We had a deal with the previous owner who didn't seem to care, nor did the nameless musician. We canceled that day of shooting and found a new place the next day.

14.) Music rights take weeks. And by weeks I mean months.

15.) Be prepared for anything. Our camera's memory cards were stolen in a park. Thankfully, we had insurance.

16.) Love it so much or believe in it so much that you'll work on Christmas Eve for it.

18.) Be shameless in asking for endless favors and help. When it's all over -- send thank you notes, flowers, etc., and be willing and prepared to return the kindness you've received.

20.) Be willing and excited to learn new skills. I never edited before and had to learn quickly for this film.

LIFE IN COLOR was an official selection of South by Southwest 2015 where it had its world premiere. Katharine wrote, produced, directed, edited and stars in the film opposite Josh McDermitt from The Walking Dead. The film won the Best of Fest -- Prix d'Or Award at the Lower East Side Film Festival in New York City and the Special Jury Prize at the Napa Valley Film Festival. LIFE IN COLOR is currently available on iTunes & Amazon.