Nashville, Tennessee is widely associated with country music. But there is so much more to "The Music City" than country music alone.

Each neighborhood is like its own little world. With so many institutions of higher education, including Vanderbilt University and Belmont University, college students (and their laptops) fill book stores and coffee shops. There are honky-tonk bars and cowboy boot shops; there are countless singer/songwriter hopefuls performing in bars and outside restaurants. There are football fanatics and marching band battles. Health fanatics run through the parks and artsy folks sport every kind of piercing or tattoo.

Nashville is a metropolis rich with culture. As food is an integral part of understanding culture, here are eight foods to try when you visit.

Head downtown and sink your teeth into a Pulled Pork Sandwich, best eaten with a generous squirt of barbecue sauce and a side of beer. To get the full Nashville experience, order it at Rippy's Bar & Grill, where you can chow down while listening to live music. The performers are often transplants from all over, and they come to Nashville hoping to "make it." You may just walk away with one of their demo CDs in addition to your sandwich!

A southern staple, Fried Catfish appears regularly on Nashville menus. You may be thinking, "How fresh could fish be in a landlocked state?" But certain types of catfish live in rivers, like the Cumberland River that snakes through the heart of downtown. Often served with cole slaw and hush puppies, fried catfish should be sprinkled with fresh lemon juice and dunked in tarter sauce to complete the savory experience.

Nobody does Smoked Ribs like Southerners. (Are you getting the feeling that it would be hard to visit Nashville as a vegetarian?!) There's a science to smoking meat that takes real practice to perfect, and when done right, the smell alone can make your mouth water. Wash them down with some beer while watching an SEC football game. It's hard not to feel alive when you're surrounded by spirit that pulses with camaraderie/rivalry, especially when you're eating such delicious food.

One of the first times I visited Nashville, a local woman asked me if I'd been to a "Meat & Three." As I was born and raised in the North, where no such thing exists, I asked her to repeat herself three times before she finally realized I had no idea what she was talking about! At "Meat & Three" restaurants, customers can choose one meat (Fried Chicken, Sugar Cured Ham, Meatloaf, Roast Beef etc.) plus three side dishes (Creamed Corn, Stewed Okra, Mac & Cheese, Baked Squash etc.). Arnold's Country Kitchen is just one of these restaurants where tourists can sample a variety of southern comfort food. 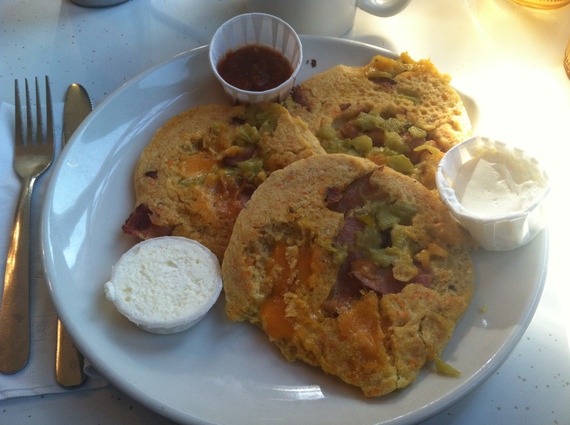 To get away from meat for a bit, wake up early for some Pancakes. Sure, you can get pancakes just about anywhere in the United States. But few places do this breakfast dish quite like Nashville's Pancake Pantry. Since 1961, tourists and locals alike have been lining up at the doors to try one of the many pancake options. (And when I say lining up, I really mean it -- it's common to wait more than an hour just to get inside the doors!) Luckily, those aspiring singers I mentioned earlier like to entertain Pancake Pantry customers. They set up their guitar case on the sidewalk outside, and perform for people waiting to be seated. From Sweet Potato Pancakes to Pigs in a Blanket (pancakes wrapped around sausage) to Santa Fe Cornmeal Pancakes (best served with butter, maple syrup, sour cream, and hot picante salsa -- the combo tastes much better than it sounds!), you won't find pancakes like these many other places.

If you've been indulging in the above foods, you're going to need a pick-me-up. Who wouldn't be tired after eating that heavy, stick-to-your-ribs type of cuisine? Luckily, Nashville can supply your caffeine fix. While the city is not known for its Coffee, seize your opportunity to stay away from corporate chain shops and experience a local coffee house.

Nashville has an array of independent coffee shops, and it's hard to say which is better -- the coffee or the people watching. Try a Café Naranja (Iced Espresso with Orange Peel, Coconut Milk and Local Honey) at Eighth and Roast and sip the artisan brew as you visit the nearby antique shops. Or, sip a Mochahontas (Double Mocha with Cinnamon and Vanilla) from Bongo Java, where the coffee is 100% organic. The Frothy Monkey boasts four locations in the greater Nashville area, and their Turtle Latte boasts flavors that will soon leave you addicted.

Need a little something to go with your brew? Well, you can't visit the South without trying a Slice of Pie. For that homemade taste, visit a local farmer's market and purchase a Peach Cobbler, Pecan Pie, Apple Pie, Cherry Pie, or anything in between!

And lastly, wash all that soul food down as the Southerners do, with a swig of Sweet Tea (and maybe some Tums while you're at it....).

Writer, coffee-addict and lover of being outdoors