"Doubt is our product, since it is the best means of competing with the 'body of fact' [linking smoking with disease] that exists in the mind of the general public. It is also the means of establishing a controversy...." (Internal 1969 document of Brown & Williamson, a tobacco company, outlining their strategy to undermine medical science linking tobacco to cancer and heart disease)

I belong to a progressive faith community that is deeply concerned about the state of the Earth and is wrestling with its commitment to what is variously termed "creation care" or "Earth care," particularly in regard to the issue of climate change. The climate issue has assumed new urgency following the release of the National Climate Assessment on May 6, 2014, and our group met recently to ponder our collective response.

Immediately following the spirited discussion, a friend and participant asserted to me in private, "But the science isn't settled." I was taken aback, for multiple reasons. First, I didn't expect this canard from anyone in our group. Second, to my mind, the science is settled and has been for nearly two decades. And third, "the science isn't settled" is a familiar refrain of climate-change deniers or disinformers, categories into which I don't think my friend falls.

I'm much better at thinking on my butt than on my feet, so my on-the-spot reply was pretty lame. Below is what I wish I'd said.

Most of our political "leaders" aren't. By and large, they're followers who act only in response to intense public pressure -- for example, in the case of civil rights or same-sex unions. Therefore, enacting change in all issues of real consequence is a heavy lift. This is particularly true in regard to the climate because of the issue's complexity.

Following the release of the documentary An Inconvenient Truth in 2006, polls showed that the public largely accepted the scientific evidence of global warming. America was poised for action. Then the inconceivable happened. The climate movement lost ground to a disinformation campaign funded by the fossil-fuel lobby -- particularly the Koch brothers and ExxonMobil -- and implemented through conservative think tanks such as the Heritage Foundation and the Cato Institute.

The climate-change deniers lifted their script straight from the tobacco lobby's campaign of the 1970s to counter mounting evidence linking cigarette smoking to cancer and other diseases. This strategy for public deception once again proved highly effective. Public trust in the reliability of climate science plummeted, as Pew Research Center polling showed. 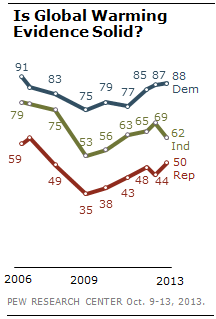 The stock-in-trade of disinformers is lies, half-truths, and doubt. Here's a climate lie: "[A warmer] Earth will be able to support enormously more people because a far greater land area will be available to produce food." Here's the reality. Extreme weather events attributable to climate change have contributed to crop failures around the globe by drought, flood, and disruption of traditional growing seasons. Indeed, the civil war in Syria has been at least partially attributed to a four-year drought that drove destitute farmers from the countryside into the major metropolitan centers, fueling unrest. Moreover, declining snow packs in mountainous regions from California's Sierra Nevada to the Himalayas reduce water available for agriculture. Snowmelt from the Himalayas in particular provides critical water for nearly 3 billion people. The next world war, it's been said, will be fought over water.

Lies convince the most gullible, but doubt is more insidious, feeding lethargy in the masses of the uncommitted.

The first stage in planting doubt is to deny the evidence. When the evidence can no longer be denied, as happened in 2006 when An Inconvenient Truth aired, the second stage kicks in with its disingenuous claim: "The science isn't settled." When the scientific predictions become reality, obvious to all but the most intransigent -- for example, following Hurricane Sandy and the release of Chasing Ice -- the last stage of disinformation is to appeal to economics: Yes, there's a problem, but we can't afford to address it because it's too expensive and a job killer.

I'll deal with the economic stage of disinformation in the next post. For the time being, back to the question at hand: When is the science settled? The unfortunate answer is never.

The most cynical trick of disinformers -- "The science isn't settled" -- exploits a germ of truth that strikes at the heart of all science. Unlike mathematicians, who deal with theorems, physical scientists deal with theories. Amenable to formal logic, theorems carry 100-percent certainty. Lying outside the reach of formal logic, theories do not. Theories may be validated by experiment but not proven. Consequently, theories remain ever-subject to revision or overthrow. Einstein's general theory of relativity, for example, revises Newton's theory of gravitation. Still, few of us (except Sandra Bullock) lose sleep worrying about the possibility of floating away from the Earth because Newton wasn't quite right about gravity.

Theories, however, when well established, are accepted as factual and integrated into the canon of scientific thought. Theories become established when they have survived the rough-and-tumble of scientific skepticism and vigorous debate to earn overwhelming consensus among scientists. The laborious process usually involves the replication of results by independent individuals or laboratories.

Climate science has jumped all these hoops. Climate science is not new; it began in the 1820s when Joseph Fourier discovered the "greenhouse effect" while trying to estimate the Earth's equilibrium temperature. The science of global warming is now mature, and it enjoys overwhelming consensus among scientists -- 97 percent, according to the National Academy of Sciences, America's premier scientific body.

In the mouths of climate disinformers, the seemingly innocuous statement "The science is not settled" is a stalling tactic. Translation: Let's keep studying the issue and not take any action. And so it might seem germane to ask, "When is the science settled?" Again, the truthful but unhelpful answer is never.

But the question is illegitimate, and the disinformers damn-well know this. The proper question is, "When is the science settled enough to act?"

Click here for a list, compiled in 2011 by the Union of Concerned Scientists, of the consensus statements of all of America's most prestigious scientific bodies (and some international bodies) regarding climate change.

For the climate issue, the science was settled enough to warrant decisive action 15 to 20 years ago, but disinformation tactics have carried the day, setting us back at least a decade. Each day, week, and year that we fail to act will make the ultimate transition away from fossil fuels (the subject of the next post) more disruptive and less probable of success. We are fiddling while Rome burns -- and playing Russian roulette with the futures of our children and grandchildren.

I am grateful for the sage editorial advice and climate wisdom of Doug Hendren. Check out Doug's incisive musical website, musicalscalpel.com.