A long time ago in a land far away... ok it wasn't all that long ago nor was the land that far away, but a few years back someone said something that struck a chord with me and I have never forgotten it. That something had to do with the way we need to look at our screens - our PC, smartphone and tablet screens.

The man who said it was a gentleman by the name of Bob Gollwitzer, a very smart and savvy guy who is the owner of Pro Mobile Productions in Philly. In fact when Bob said this, it was long before the advent of smartphones and tablets so he is quite the soothsayer.

What Bob said was "We (those in marketing) need to look at our PC screens as if they were televisions and people do not read television, they watch it."

In essence what he was saying that people, AKA consumers don't want to read on their computers per se, they want to view something, too.

Fast forward to today and it's quite obvious that Bob knew what he was talking about.

And one final stat in the form of, what else, a visual: 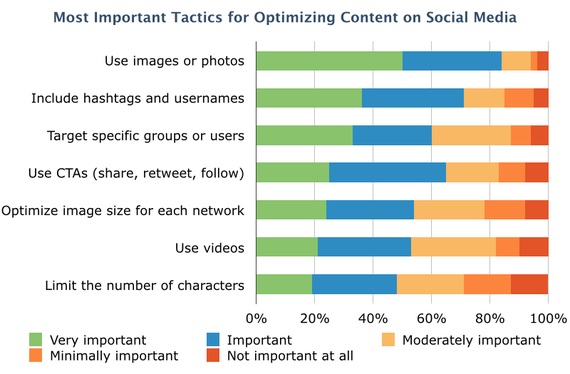 Should surprise no one

Face it, if you're in marketing and any of the above stats throw you for a proverbial loop, you may want to consider another career.

The power of visuals in marketing and advertising is not the future, it is the present. Ok technically it's the present AND the future, but my point is this is not something that's coming down the road nor is it a trend or a fad for that matter.

Consumers have, as Bob predicted, taken to looking at their screens as if it were a television. They want and quite frankly, expect to see some kind of visual aid, if you will, when it comes to marketing and advertising. These visual aids resonate and connect with consumers and spur them to take action.

Below are some quotes and thoughts from various marketing professionals re: the power of the visual.

But before I get to them, I want to remind marketers and advertisers alike that just as is the case with every form of marketing, the most important word to remember at all times is relevance. If what you share is not relevant to your customer and prospect, it will not matter so don't even bother.

Moral: Know your customer and potential customers then give them what they want and are looking for and are interested in.

Some words to wise on the subject of the power of visuals in marketing.

"Video is all about storytelling. There is no better way to get people to connect to a story than having them watch something. This helps them to see and hear things first hand. It draws out more emotion than just reading something in print. People want to share a video that made them laugh, cry or was simply informative. In fact, video gets shared three times more often than text. When you can get people more emotionally involved, then it develops a deeper connection with the brand." -- Chris Yates, Huddle Productions CEO, 4-Time EMMY Winner

"With user preference shifting to viewing information versus reading it, we have begun to redirect our marketing dollars to visual relevance in our industry. While the return on economics isn't quite there yet, we are making the investment now in order to learn best practices for the future. Without question in the next few years, this will become a significant marketing platform and the major forces are steering us this way." -- Chris Mettler, Comparecards.com

"Pinterest, our still somewhat new little sister on the block in regards to tactics, can be a little daunting and way too fun at first, but it has proven to be a powerful tool. When we look at our site analytics and conversion rates, pinning has a great ROI. We post cool pics coupled with no-nonsense call's to action. We pin to the right boards and our content gets shared to relevant and targeted followers who are highly interested in what's being shared." -- Asenath Horton, Principal, The City Launch

"Visuals in marketing are essential for us. We work in a highly technical field. Our software and technologies can be daunting to some of our clients. Visuals such as infographics and videos help us tell our message more effectively and in a concise method. In addition, they make excellent sales tools." -- Dave Turner, CEO of SkyCentral and GroupLink