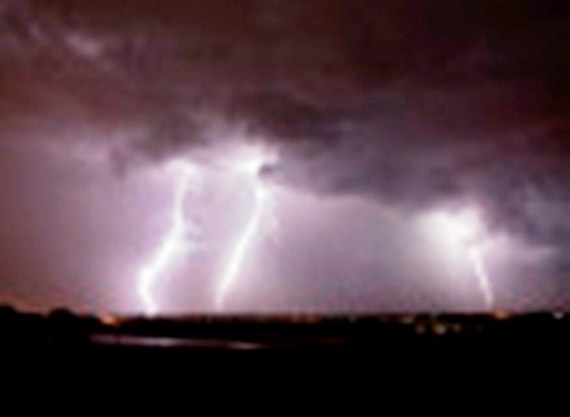 However, developing countries often orient government consumption and investment in the same direction as that of the cycle in general economic activity. In so doing, they amplify upswings and worsen recessions - what Kaminsky, Reinhart, & Végh (2004) termed as the "when it rains, it pours" phenomenon.

A simple inspection of Figure 1, which plots the value of fiscal stances in periods of expansion versus those registered in downturns, seems to lend partial support to the "when-it-rains-it-pours" phenomenon. Most of the countries in the upper and lower right quadrants of the chart are developing economies (in blue) and most importantly upper middle-income countries. In contrast, most of the high income countries (in red) appear on the upper and lower left quadrants with fiscal stances that largely contribute to long-term fiscal sustainability. However, the chart also confirms earlier findings in the literature showing that a number of developing countries have graduated from fiscal policy pro-cyclicality (c.f., Frankel et al. (2013)). These quadrants help categorize countries into four groups: 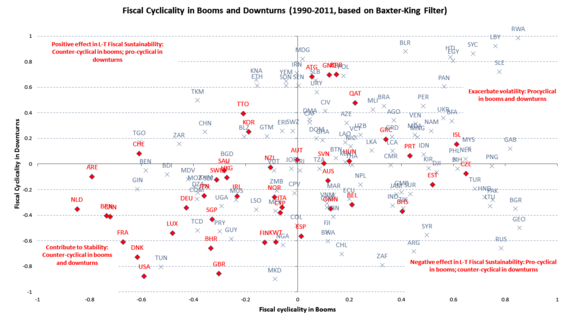 Source: Carneiro and Garrido (2015). Some of the results may seem counter-intuitive but they actually uncover those countries that save for a rainy day, and those that let it pour when it rains.

For instance, one may be surprised to see Chile, a country that has earned a reputation of fiscal prudency and good overall macro management, in the fourth quadrant, which indicates risks to fiscal sustainability. As it turns out, Chile is, on average, for the period 1990-2011, moderately pro-cyclical in booms, and markedly anti-cyclical in downturns. Their ability to sustain a strong fiscal position arises from having a system of buoyant tax revenues and the great contribution of the private sector to economic activity, so the country is able to register solid, positive fiscal balances both in booms and recessions with marked improvements in its overall fiscal stance.

Compare this performance with that for Greece, for example, especially during the post-financial crisis period when it showed deteriorating fiscal balances, faster increase in expenditures relative to revenues, and poor economic performance, with an exacerbated contribution to volatility derived from a more pro-cyclical fiscal stance. With this, there is no doubt that Greece has yet to earn enough stars to join the same status as Chile's.

As it turns out, many resource-rich countries remain clustered in the bottom right-hand quadrant. This is where things turn from moderate showers to a downpour too quickly. For this group of countries, in good times, all is well that ends well, but as soon as things turn sour so does their governments' ability to lean against the wind. Carneiro and Garrido (2015) have also found evidence in support of the idea that institutional quality is an important determinant of a country's fiscal stance. This is an important result that suggests that efforts to graduate from fiscal policy pro-cyclicality need to be accompanied by policy reforms that seek to strengthen the ability of countries to save in good times to generate fiscal buffers that could be used in bad times. In that regard, initiatives such as the establishment of fiscal councils and the adoption of fiscal rules, the development of sound debt management strategies that reinforce fiscal discipline, and the strengthening of macro prudential regulations appear to be necessary conditions for graduation from pro-cyclicality.

Otaviano Canuto is an ex-Vice President and ex-Executive Director, World Bank; Francisco Carneiro is Lead Economist and Program Leader for the Caribbean Countries, World Bank; Leonardo Garrido is a consultant with the World Bank.