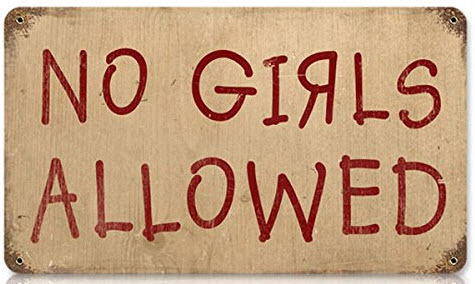 Not long ago, I observed that genealogy is now officially a TV genre. One of the reasons I felt confident in making this claim is the frequency with which I am approached by television producers about forthcoming shows. They reach out to pick my brains and I generally do my best to help because I have a conspicuous bias: I'd like to see as much genealogy on air as possible. But yesterday I received an inquiry that made me check the calendar to be sure it was 2016.

After briefly explaining that the series would focus on the use of genetic genealogy to solve personal history mysteries, it went on to say:

"Since this show is for a very male-oriented network, we're looking for authentic, engaging male hosts between the ages of 30-55, who have a dynamic personality fit for television, and would be able to help people prove or disprove people's claims ..."

This struck me as ... well, peculiar. In this age of ever-increasing chord-cutting, do the traditional demographics of the host network still override all other considerations? I'm a middle-aged woman, but watch Impractical Jokers on TruTV (60% male demo). Isn't this kind of à la carte viewing rapidly becoming the norm?

Even if the answer is 'yes,' is it a given that men won't watch women do something that interests them? History Channel demographics lean heavily male, but does that mean I shouldn't watch American Pickers because I'm a woman? Or are we to believe that women will watch men on TV, but not the reverse?

And do they really want to toss aside potential female viewers? After all, every survey I can find about genealogy concludes that 63 to 72% of genealogists are female, so why did this show wind up on a network that apparently skews so male that all the hosts must be men? Is it only for the other 28-37%?

Perhaps those behind the series aren't that well acquainted with genetic genealogy yet, so here's a bit of a primer:

I'm deliberately not sharing specifics because I'm hoping those behind this show will reconsider and let some girls at least have a shot at gaining entrance into their playhouse. Genetic genealogy is not and never has been divided by gender, so it would be a pity to start now.