Holi is a religious festival that celebrates the beginning of spring and the triumph of good over evil. Its origins are firmly rooted in the sacred texts and traditions of Hinduism.

But in recent years, Hindus in India and in the diaspora have found that the Holi celebrations they organize for their own communities are increasingly drawing interest from non-Hindus.

The spirit of Holi is one of playfulness and inclusivity, so people of other faiths are often welcomed to join in on the fun. But there’s a fine line between appreciating culture and appropriating culture.

There’s a chance that the organizers of the “color” run or festival you’re attending have watered down the essence of Holi to turn a profit. Or, you might unintentionally become guilty of cultural appropriation when you attend a Holi event without taking time to learn about the holiday’s religious roots, instead treating these time-honored traditions like a personal photo op. The problem happens when people who don’t identify as Hindus strip the festival of its spiritual context and history.

So before saying “yes” to a friend’s invitation to attend a Holi party, it’s worthwhile to take a second look at the event itself. Consider whether Hindu Americans are involved in putting on the event, and whether the event’s organizers acknowledge Holi’s origins.

Holi is a spring festival that celebrates new life. The holiday has a variety of ancient origin stories that often vary from region to region within India. For some, Holi is a day to honor the immortal love story of the divine couple Radha and Krishna. Others think of the love and sacrifice of the god Kama. There’s also the story of Prahlad, a faithful devotee of the god Vishnu.

Holi is a time when traditional social boundaries are overturned, according to Anantanand Rambachan, a religion professor at Minnesota’s St. Olaf College.

“Children can squirt elders, and women can douse the men. Animosities, like the darkness and cold of winter, are forgotten and unity prevails. In the celebration of Holi, we all become one, overlooking differences of age, authority and status,” Rambachan told HuffPost in 2017.

Hindus in the diaspora often organize Holi celebrations for their communities. The festival is popular on college campuses, with South Asian students hosting events open to classmates of all backgrounds.

The Festival of Colors USA runs an annual Holi event at Utah’s Sri Sri Radha Krishna Temple. Thousands of people attend the event in Spanish Fork, many of them Mormons from nearby schools like Brigham Young University who are lured by the promise of big, colorful, messy party.

Festival coordinator Caru Das is a convert who belongs to the International Society for Krishna Consciousness. Popularly known as the Hare Krishna movement, the society has grown from one that primarily drew young white hippies to one whose ranks are filled with Indian immigrant families. Hare Krishnas put an emphasis on private devotion, but engaging outsiders is also important.

That’s what led Das to start hosting Holi at the Spanish Fork temple over 20 years ago.

“As someone who crossed over from a typical American middle-class upbringing to someone who embraced the principles of dharma and reincarnation, I wanted to find a means to make those same treasures available to people from my own background,” Das told HuffPost last year.

Despite the festival’s growth over the years, Das said its original intentions are still important. Musicians perform songs filled with mantras. There are yoga demonstrations and performers who explain Holi through dance. Every hour, all attendees are invited to count down from 10 and shout the name of Krishna. For Hare Krishnas, this act of saying Krishna’s name is a form of devotion.

Das said that it’s not particularly important to him that Holi retains its distinction of being a religious festival.

“As soon as you say Indian or American or Hindu or Christian, you put a barrier between people. You’ve pulled down a curtain. And I wanted to do not a religious festival, not an ethnic festival, but a spiritual festival that’s equally appealing to atheists, Jews, Buddhists, Muslims, Hindus, Christians,” he said.

This sense of Holi as a holiday that extends beyond religious and ethnic boundaries seems to be shared by other Hindu Americans.

For Rambachan, Holi is a celebration of life that is “accessible and has universal meaning.”

“Many Hindus in the United States and elsewhere participate in some aspects of the Christmas season — exchange of gifts, for example — without sharing all its religious meaning,” Rambachan said. “In a similar way, I see many who do not identify as Hindus sharing in aspects of Hindu festivals.”

For Megha Kalia, a Hindu-Punjabi dance instructor, Holi is a spiritual and cultural event imbued with memories from her childhood in Mumbai. In 2009, she started organizing Holi Hai celebrations in New York City.

Although the festival started primarily for Hindu Americans, over the years it has drawn a following outside of that community. Kalia doesn’t mind.

“We are celebrating a festival that celebrates universal brotherhood, love and unity — we couldn’t consciously say no to any one community,” she told HuffPost last year. “We welcomed everyone with open arms!”

But what does trouble Kilawan is when the aesthetics of Holi are used without acknowledging the festival’s history.

One series of Holi celebrations, the Holi Festival of Colours, was founded by three Germans. None of the organizers behind the festival identify as Hindu, co-founder Maxim Derenko told HuffPost in an email. The idea for the event emerged after fellow founder Jasper Hellmann attended a Holi festival in India. Hellmann was “amazed” by the festival and wanted to bring the event to Europe, since “not everyone can afford to travel to India” for Holi, Derenko said.

The team has exported the idea of a color festival to cities across Europe, South and Central America, Africa, and the Middle East. At least 30 confirmed Holi Festivals of Colours events are happening this year, Derenko said.

VIP tickets to their 2018 festival in London cost more than $120 and include 5 bags of colored powder, a T-shirt, drinks, and access to separate toilets.

Asked what their organization does during the events to honor the festival’s Hindu roots, Derenko said, “We are always communicating the roots of the festival,” but didn’t point out anything specific.

His team’s primary goal is to “create a wonderful experience for the attendees.”

Asked whether he thinks festivals like his may be a form of cultural appropriation. Derenko said, “We do not want to harm nobody with the celebrations.”

“We are bringing the core ideas of this wonderful festival to more people around the world — those values are universal: they should be accessible for every one,” he said.

Another Holi festival, called Festival of Colors: Holi NYC, was reportedly started by a non-Hindu. When asked about whether the festival was a form of cultural appropriation, organizer Jack Langerman was unapologetic.

“I try to be as understanding and respectful of their views as possible,” Langerman told Brokelyn in a 2016 interview. “I understand, given the fact that I’m not Hindu, I’m some white kid who grew up in New York. I understand why that’s bothersome. All I can say is, Hindus figured out the best way to celebrate spring.”

Requests for comment sent to Festival of Colors: Holi NYC were not returned.

The Color Run is a running series that holds races in more than 35 countries around the world. During the races, runners are doused with bright powdered colors in a way that is reminiscent of the Holi festival.

Travis Snyder, founder of the Color Run, claims he wanted to add a visual component to the event to serve as an “aesthetic reward” for participants. On its website, the Color Run states that the inspiration for their run came from “several awesome events, including Disney’s World of Color, Paint Parties, Mud Runs, and festivals throughout the world such as Holi. ”

“Let’s be honest: If you take a look at photos advertising the event, a logical person could very readily mistake the event for a Holi celebration, and not any of the other sources,” she wrote.

Suhag Shukla, co-founder of the Hindu American Foundation, said that the Color Run is a prime example of cultural appropriation.

“Honestly, there is nothing in the world like the color play that is integral to Holi, so to not acknowledge it comes across as dishonest,” she told HuffPost last year.

When Is A Holi Celebration Cultural Appropriation?

There’s a significant difference between events like the Color Run and the Holi festival that attracts tens of thousands of participants in Spanish Fork every year. Even though the Utah event is wild, big and brimming with college kids, it’s a festival run by a Hindu organization that pays homage to Holi’s roots as a deeply spiritual holiday.

But festivals that ignore the history and philosophy behind Holi risk becoming appropriation.

Shukla said that it all depends on “intent and the respect accorded to the full aspects of the holiday.”

“Too often, American pop culture picks and chooses cafeteria-style from Hindu traditions, thereby missing the fundamental spiritual context and purpose, and ending up with what can look and feel like a circus,” Shukla told HuffPost. “But perhaps rather than making it some hipster or commercial enterprise, people can join local Hindu celebrations to actually enhance their religious and cultural literacy quotient.”

Pandit Dasa, a Hindu American and a mindfulness expert based in New Jersey, said that what’s happening with Holi now is similar to yoga’s rise in popularity.

“Yoga is referenced in the scriptures of Hinduism as a practice that helps you come closer to the divine or God. Obviously [most] yoga studios today have nothing to do with that philosophy,” he said last year.

Dasa said that he’s not necessarily against the idea of people practicing yoga for its health benefits or attending Holi festivals just to have a good time. Still, he thinks it would be helpful for attendees to pay attention to Holi’s history, and take it upon themselves to do some research before attending festivals.

He also thinks organizers can do their part to educate and explain ― perhaps providing placards and signs explaining why Holi is a spiritual time, and encouraging people to remember their relationship with the divine.

Rambachan believes Holi should be accessible to people of other faiths ― but that it’s always good to identify its cultural and religious context.

“This identification is also an act of gratitude for the ways that we are enriched by the traditions of our neighbors and our acknowledgement of indebtedness to these traditions.”

This is an updated version of an article that HuffPost previously published on March 24, 2017. 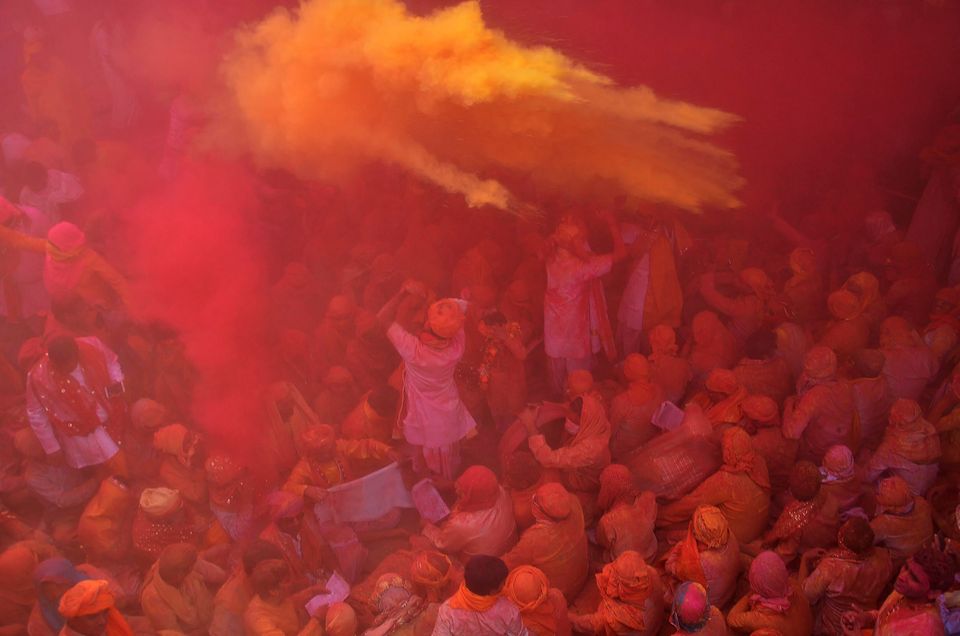 1 / 27
Indian Hindu devotees throw colored powder during the celebration of Holi at Sriji temple in Barsana in the northern Indian state of Uttar Pradesh on Feb. 23.
Getty Images