It was the great Leonard Bernstein who said,

"Music can name the unnameable and communicate the unknowable."

Which might explain why I haven't been able to put into words what happened last night when my husband and I took our son, Julian, to see Justin Timberlake and The Tennessee Kids for his 8th birthday.

Having anticipated this event all summer, Julian put on his hat and tie-

(because he didn't have a suit.)

Then, true to his lyrics, Justin Timberlake proceeded to show us a few things. Namely, about love.

It was my son's only gift request this year. Well, that and Benny Spaceship Spaceship from The Lego Movie. And while everyone knows I love Legos above all toys, Justin Timberlake was decidedly more appealing.

Frankly though, it would have been easier to get him Legos. Having just celebrated turning 40 a couple weeks ago, and having just recovered from the back pain brought on by my inability to sit still at the Arcade Fire concert we went to for my birthday, it would have been easier. And I'm sure a good percentage of my Facebook feed probably thought he was too young or that it might be inappropriate to bring such a young child to mostly grown-up event. Especially a child with autism. One that potentially might disrupt the concert-goers around him and make his mama worry the way mamas always do.

You know the way we do. The way the worry threatens to take over when you look around and don't see any children, let alone a child "like yours." Things started to unravel quickly in my mind as I looked around, giving way to my worries about Julian's obsessions, his volume, his repetitiveness, his clumsiness, if he would spill someone's drink and if they would be unkind to him... basically all the things a parent worries about when they have a child that is easily misunderstood.

Even as his parents, my husband and I have taken a long while to understand. We didn't get it, not until last year anyway, when we discovered that Julian had high functioning autism. It's why he passed the screenings despite our suspicions and denial that something wasn't quite right. It's why it took us so long to acknowledge and put our finger on what was wrong. This boy that seemed academically so advanced and emotionally so far behind. This boy that still bites his fingers when he gets excited and has emotional outbursts like he's going on 5, not 8. This boy who wanted nothing but the JT 20/20 Experience for his birthday.

My worry was if his Dad and I were still figuring him out, how were all these people around us going to understand him or the fact that he might say the same things over and over all night or knock over their beer, or the fact that he could listen to SexyBack 6000 times and never get sick of it? And trust me when I tell you this summer I learned that is, in fact, entirely possible.

We were there early and I looked around wondering who would be sitting around us, so when this group of gorgeous looking girls came and sat next to us, I cringed. They were dressed to the nines. They looked amazing in that Girls Night Out way reminiscent of my college days. I knew they came to get their JT on, and I wanted everyone to have the good time they came to have.

My husband, on the other hand, hoisted our giant 8-year-old as high as he could get him, not thinking he might disrupt anyone, while I worried the people behind us wouldn't be able to see. And all the while Julian, in perfect autistic fashion, was repeating himself over and over, knocking into the chairs and dancing and singing and yelling, "It's my birthday!! This is my present! This is my present! I LOVE YOU JT!!"

Now I have found that others don't always find all the things you find beautiful about your child to be so beautiful, but I think that's where Leonard Bernstein comes in. Everyone around us saw it. Everyone felt it but none of us could name it.

And at the perfect quiet moment, the group in front of us started yelling to get Justin's attention, because despite his loud volume, Julian's voice was not carrying. Only repeating. And then before we knew what was happening, the group in front of us that had turned out to be so incredibly kind all night to our birthday boy, and these gorgeous girls who I was convinced would be totally annoyed by Julian, had captured Justin's attention. And then it happened. Justin Timberlake was singing Happy Birthday. They all were.

The awesome grandmother of three sitting in front of us.

The model-esque girls sitting to our right.

The people sitting to our left that offered us the video that they captured of the whole thing.

They were all singing.

And I swear the light in his eyes when this world of people began to sing was so bright it must have been what got my eyes so unexpectedly teary, you know the way your eyes water when you look at the sun? All my mama worries had been for naught. Everyone was embracing our boy in the way I was afraid they wouldn't. Here we stood while thousands of people lifted him in song to celebrate the day he came into the world eight years ago. That day that they lay his tiny warm wet body on my still heaving, labor-heavy chest. That day my life changed forever the way it does when a child touches you with their magic, they way they bring you to life with the special kind of music that only a newborn baby makes. The way it makes you want to show them the world and to be able let them hold it in their hands, even if just for one moment.

Which brings us full circle to why we were even there in the first place.

Julian's deep connection to music has been something we cultivated even while he was still in the womb long before we knew he would later struggle with autism. Thinking back, Justin Timberlake was my workout music of choice on the treadmill with my big pregnant belly while Julian was still in there percolating. Yes, I even occasionally put headphones on my belly for a good dose of Mozart or Bach and sometimes a little Radiohead. Julian was birthed to his aunt singing Strauss in the delivery room, in only the way a lyric soprano can do, and he rocked out in the car like he was Lars Ulrich the first time he heard Enter Sandman by Metallica. Our love of music vicariously fueled his, so it wasn't surprising when he said he wanted to play the drums when he was 3. And for this boy who has a lot of loose ends, music has been what has made him feel safe to run without worrying about tripping on his laces. It has been the connection that has held his life together securely and I know this because this year he didn't want a table full of presents to unwrap. He wanted the gift of music.

It has held him. It has sung him to sleep and it has rocked his little world. It has jolted him awake. Music has shown him his place in the world and the power of music to change it all. It has been the solvent that dissolves walls. And haven't we all felt the power of that? Like Bernstein describes and like an autistic child who doesn't always know how to communicate something -- we just didn't know what it was or just how to say it.

Last night the world saw Julian, and for the first time, I think Julian saw himself in the world.

Want to talk about hope? Oh, it was alive, it was so alive, you could feel it breathing. It's why I found my hands shaking in the middle of the most breathtaking rendition of Happy Birthday I've ever been witness to. It's why despite watching that video 300 times, his dad and I can't do it without blubbering like babies. Call it the Leonard Bernstein effect (I like the physics ring of that), call it the power of music, call it what you will.

I call it the power of love set to a soundtrack. 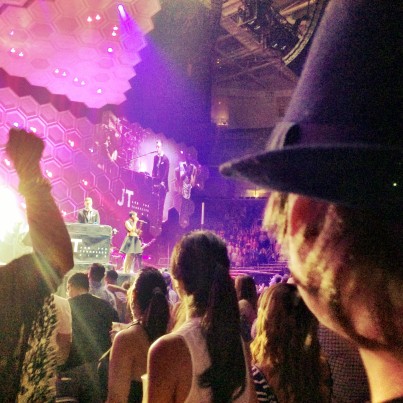 And I quite think Leonard Bernstein would like that and that's where he comes back in. Still unable to capture what happened last night at that concert, I call to mind some of his other wise words. When I try again to put my finger on what happened, it still seems impossible to pinpoint and I realize this is the mystery that he was talking about when he said, "The key to the mystery of a great artist is that for reasons unknown, he will give away his energies and his life just to make sure that one note follows another... and leaves us with the feeling that something is right in the world."

That was it! That was exactly what Justin Timberlake had done. He had made us all artists in that moment. The feeling he had left us with was what Leonard was talking about and suddenly I understood why all felt right with the world. All those wrongs I had added up in my head disappeared like smoke when I saw the potential that even one little song had to make a whole world sing.

So thank you Justin Timberlake and the "Sexy Ladies" sitting all around us. Thank you Tennessee Kids and the people all the way in the back. Thank you to the thousand people who stopped to wish Julian a personal Happy Birthday on the way out. It took us over an hour just to get outside the arena whilst Julian was high-fiving and fist-bumping everyone that stopped him. Thank you for showing me I was wrong about what the world would do when they saw my son. Thank you for seeing him and not just his disability. Most probably didn't even know he had one. They were too busy singing along with Justin. They were all too busy showing me a lot about human nature, and a few things about love. 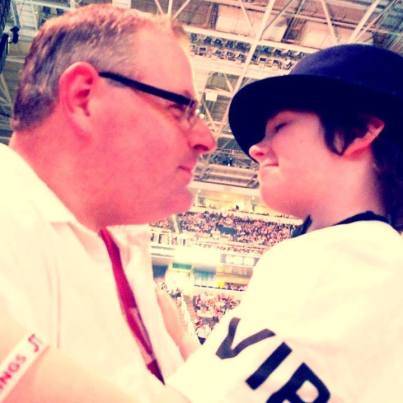 This post originally ran on The Manifest Station, a site run by Jennifer Pastiloff.

For more information on autism and help finding access to services for families in need please visit us at Tree of Life United Ministries.