Understanding the minds of children and their development is critical for parents who want to unlock their Parental Intelligence. At age 3 kids are egocentric and assume what is in their mind is in the mind of others. However, by age four kids are generally able to understand that another child can have a different point of view. This is a milestone because they are aware of other people's mind operating differently than their own.

By age eight or nine the child goes a step further. He is able to think about what one kid thinks another kid thinks. This new mind reading ability is a much more complex milestone and it improves usually as kids get older and more experienced socially.

As adults we are clear people have minds with different viewpoints. This helps us parent as we try to unlock our Parental Intelligence characterized by understanding the mind of our child.

So how does this work during early adolescence?

Let's say 13-year-old Todd thinks Rich likes Lidia. Because Todd is Rich's good buddy, he decides not to get to know Lidia even though he likes her, too. But what if Todd is wrong? Then he missed out on making friends with Lidia that could lead to the personal relationship he is hoping for. He might even try to read Lidia's mind and think mistakenly she wouldn't like him when she would, another mistake in mind reading.

Why would Todd be making these mistakes? The reason is because Todd has low-self esteem and generally thinks from the point of view of rejection which biases his mind reading capacities.

How can parents help? Where does Todd's mother come in?

Well she knows her son very well. She knows that since he entered middle school, he began to think negatively about himself and began to drawn wrong conclusions about what was going on in other kid's minds based on false beliefs about rejection.

Fortunately, Todd and his mother have a good relationship and talk a lot. So she knows he's dissed himself and avoided making friends with Lidia. She corrects Todd's beliefs by telling him his pattern--that he expects rejection and avoids social interactions. Todd trusts his mother and calls Lidia. A happy ending.

How does Todd's mother have this positive influence over her 13-year-old? How did she figure all this out?
She has developed Parental Intelligence as Todd was growing up characterized by a parent working hard to understand her child's mind. She isn't just guessing at what's going on in her son's mind (like he did about his friends), she's been practicing getting to know him all his life and working at looking for clues from his behavior and conversations they have. She knows behavior has meaning and has been observing her son's behavior with potential friends as it changed from grade school to middle school.

Todd's mother checks out her perceptions with her son so her own thoughts and feelings don't cloud her vision. It is through their open dialogue that they work at problem solving together.

It first seemed as if the problem was Todd's misreading his friends' thoughts and feelings. But there was a larger underlying problem that needed to be addressed --Todd's falling self-esteem. His mother used her Parental Intelligence to problem solve with Todd the pattern he had developed of fears of rejection by his peers, followed by social avoidance.

They discover together that Todd had trouble since the changing of friend circles in middle school. Whereas he was always well-liked in grammar school and had a positive self-concept, he began to have trouble tolerating the changing friend groups in middle school. He couldn't gauge his peers' views of himself and began misreading cues based on his faulty internal perceptions.

With his mother's point of view to rely on, he began to correct his internal misconceptions and resume correct mind reading of his peers. 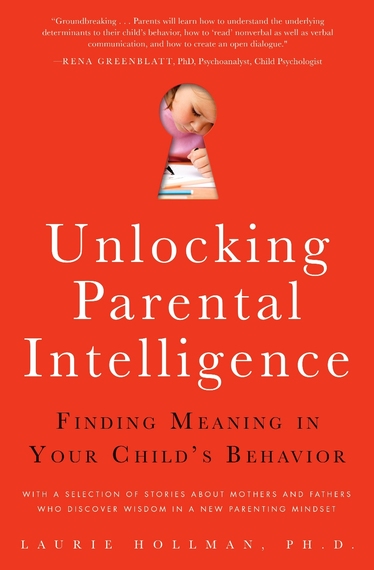 Laurie Hollman, Ph.D. is a psychoanalyst with an upcoming book, Unlocking Parental Intelligence: Finding Meaning in Your Child's Behavior.

More:
mothersfriendsSelf-conceptproblem solvingParents
Newsletter Sign Up
Raise the kind of person you'd like to know
Subscribe to our parenting newsletter.
Successfully Subscribed!
Realness delivered to your inbox