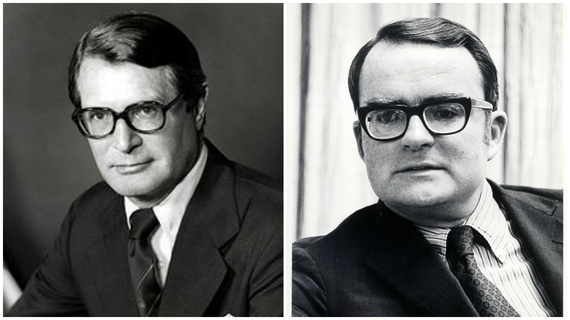 The words "Watergate" and "Leadership" don't often go together ... at least not without the word "failure" connecting them. Yet, for all the negative things "Watergate" rightfully stands for -- scandal, corruption, abuse of power, constitutional crisis -- it also provides an interesting story of genuine Leadership exhibited in a crucible of historic pressure. In what would eventually become known as "The Saturday Night Massacre," President Nixon's attempts to protect himself by forcing the firing of Special Prosecutor Archibald Cox led to the resignations of both his Attorney General Elliot Richardson (left) and Deputy Attorney General William Ruckelshaus (right): 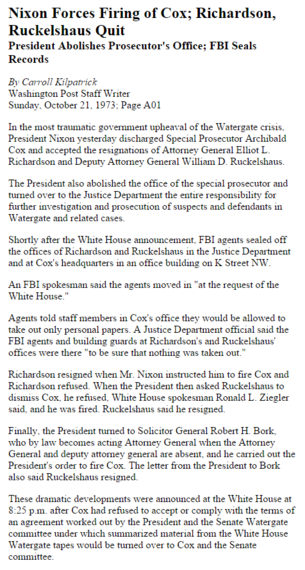 Yes, it is definitely true that changing a system requires agents of change to remain in the system in order to exert influence against the forces of Inertia, Status Quo, and Entropy. If everybody with power who believes something is wrong with the direction an organization is heading simply leaves, then nothing will change.

That said, there are times and issues when Leading requires a dramatic stand be taken. It is currently very popular to talk of being a "servant leader," but serving the people you lead means much more than simply mentoring others, being generous with your time, and caring. Sometimes, the circumstances demand that you take the bullet rather than sanction passing it on to the people behind you ... which is where the people following you are. It is why the idea of "leading from behind" is so nonsensical.

Balancing these two concepts -- when to stay and try to steer the organization and when to leave rather than participate in its current course of action -- is not easy, and there is no precise rule to follow. It is hard, requires judgment, and offers no guarantee that making the right decision will be the most effective one. Both Elliot and Ruckelshaus resigned instead of following Nixon's order to fire Special Prosecutor Cox; Cox was still fired anyway by the person Nixon finally found to carry out his order, Solicitor General Robert Bork. So what did their resigning accomplish, in the end? Nothing ... and everything. The resignations of those two Leaders didn't keep Cox from getting fired, but those acts of defiant leadership not only cemented their legacy as the only members of the Nixon administration to emerge from Watergate with their honor intact, but their bold choice to resign rather than comply became the spark that triggered the Congressional flames of impeachment that eventually led to Nixon's resignation.

Cox was still fired, but the course of history was redirected. Amazing what can happen when Leaders lead, even when doing so means forfeiting their position of leadership.

Lance Salyers currently serves as a corporate executive after a first career as a prosecuting attorney. He blogs about the fundamentals of people-focused leadership at his website: Leading With IDEAS.