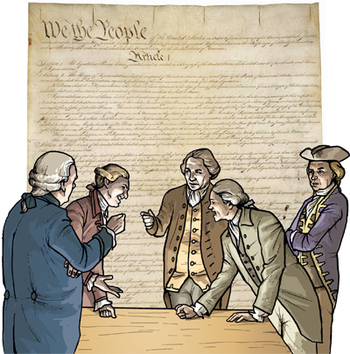 When Bernie Sanders tires to push Donald Trump supporters, or when Paiute Indians make similar complaints to right-wing ranchers about federally-owned land in Oregon, it makes headlines. No matter how often it happens, we are still surprised when left and right meet.

After all, according to our map, that's impossible. But what if the map is wrong?

For the last quarter of a century, we have managed or facilitated a series of projects that engaged participants in workshops and meetings that crossed the entire political spectrum. In all of them we asked the same question: "Does the conventional map of American politics accurately describe your experience?"

Again and again, participants have overwhelmingly said "no." They agreed that this map, born over two centuries ago during the French Revolution, was obsolete and that we need a new one.

Unfortunately, without a new map, we continue to use the old one--and continue to get lost. The old map still mesmerizes many of us so completely that we cannot see beyond it or even begin to imagine an alternative. But when we look at it with a fresh eye, it begins to lose its power to hypnotize us.

Finding a new map is urgent because the old one is inherently divisive. We cannot reunite our country and solve the problems we face unless we remember: "Left" and "Right" are not inherently and irrevocably polar opposites. As the book of Genesis describes, God may have created heaven and earth, and separated light from darkness. But God did not divide everything under the sun into "conservative" and "liberal."

We did that -- and we can also undo it. In fact, we already are. My colleagues and I are working closely with scores of organizations that have freed themselves from this paralyzing Right-Left straightjacket and reclaiming our right to life, liberty and the pursuit of happiness.

National organizations ranging from No Labels to the National Institute for Civic Discourse, as well as grassroots organizations like Public Conversations Project and Living Room Conversations, are working boldly on this frontier where Left and Right find common ground. Similarly, in the private sector, many business leaders are freeing themselves from this political dichotomy. Thoughtful entrepreneurs and economists do not agree that producing goods and services, the heart of economic activity, is fundamentally about a choice between left and right.

When managed effectively with sound principles, argues economist Rajendra Sisodia, co-author of Conscious Capitalism, business is "not a question of left or right but a question of rising higher." If one examines the strongest, most socially responsible businesses, he says, the left-right "divides start to go away and actually start to look a bit silly."

Of course real, substantive political and economic differences do exist. But to identify the real differences, and work them through to effective resolutions, cannot happen until we update our civic software and draw a better map.

What if we had an upgrade to Political Map 2.0 that reflected independent-minded Americans citizens as well as hard-core party members? What if it gave us the freedom to be liberal about some issues and conservative about others? What if it encouraged us to seek common, and even higher, ground?

The great orator and patriot from Virginia, Patrick Henry, called on his fellow citizens to pledge allegiance not just to the former colony in which they lived but also to the union of states that was being born. "I am not a Virginian, but an American," he said two hundred years ago. But what does that mean today? Just as his loyalty to America transcended his loyalty to his state, how do we rise above our loyalty to our ideology or party? Does it serve my country if I just take a side? What makes us think we are patriotic if we turn against our fellow citizens who don't share our views?

So let's not be so shocked when right and left connect. Isn't that what the Founding Fathers had in mind? Isn't that why they called our country the United States of America?

Mark Gerzon, president of Mediators Foundation, is the author of The Reunited States of America: How We Can Bridge the Partisan Divide. (Pre-order today to read more about the Political Map 2.0)