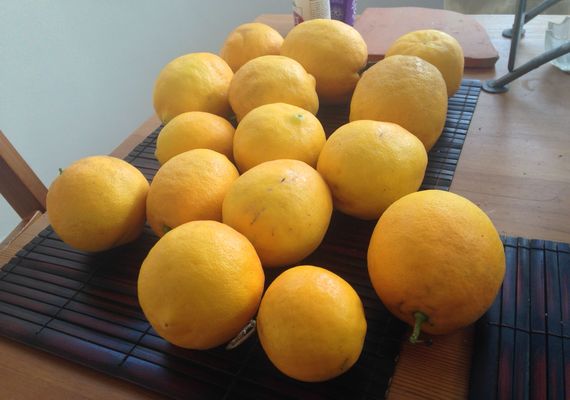 While on my daily dog walks, I noticed a house a block north of me that has a Meyer lemon tree in its front yard. In case you didn't know, orange-gold Meyer lemons are a cross between a lemon and a mandarin orange that are originally from China and are primarily found in California and other citrus-growing regions. Meyers are much beloved at farmers markets and prized by chefs for their increased sweetness, lack of acidity, and their abundance of juice, though they often aren't stocked in grocery stores since their thin skins make them difficult to transport and store. Passing the house several times, it was clear that the family living in the house was not picking these lemons -- the branches were sagging with lemons and some had fallen on the ground. I've recently become a big fan of hot water with lemon juice both for its taste, health benefits, and because I'm apparently a gajillion years old, so I very much wanted some of these delicious lemons. But I didn't know these neighbors at all, making me reluctant to ask.

People have been saying for years that the concept of the neighborhood is dying and that people increasingly don't know or feel any connection to their neighbors. Growing up, my mom was very friendly with all the families in a three-house radius -- but when those families moved away, they were usually replaced by neighbors who didn't seem interested in getting to know the families around them. I'm sure my mom reached out to them, but instead of becoming neighbors who my family could socialize with and depend on, they became mysterious strangers whose lives my mom could only piece together through chance observations.

The conventional wisdom now is that people want to be left alone with their computers, smartphones, and huge televisions. Being friendly with your neighbors is a great perk, but it's definitely considered optional, and I'm pretty bad about it myself. Neighbor relations now mostly seem to fall into the realms of measured indifference, uneasy truce, or outright antagonism, where one of the best possibilities is having a neighbor you don't ever deal with for any number of potential neighborly indignities like noise, endless and/or inconsiderate construction, ugly/lacking landscaping (which I have been chastised for), etc.

I wanted those wonderful Meyers, but I was reluctant to ask, even though it was apparent that the lemons weren't being used. After all, people want to be left alone, right? I kept walking by, envious of all those lemons and confused at the thought of what type of person would let such prizes go to waste.

So on at least two occasions, I stole lemons. I would wait until late at night and, with my cloth bag and clippers, would dart from the sidewalk if the coast was clear and quickly snip off a few lemons. I knew the lemons wouldn't be missed, and they were indeed as sweet and delicious as I thought they would be. But being a lemon thief is no way to live. My girlfriend, whose fears often run towards the alarmist, was afraid that I would be mistaken for an intruder and shot. I wasn't proud of what I was doing.

When I reached the end of my last purloined bunch of lemons, I decided that I would formally ask my neighbors for some of their lemons. After all, the family seemed nice -- I had seen arts and crafts projects on the front porch, and the parents drove not only a Prius, but also a SmartCar. But even though I knew that this newfound distance amongst neighbors was bullshit and that I had nothing to risk/lose, I still felt strangely hesitant about asking. After all, people (often including myself) want to be left alone. But I wanted those lemons so badly, and I didn't like the anxiety and guilt of stealing them.

One day, as I was walking Paulo past the house, I noticed some signs that the family was home and decided to ring their doorbell. Some dogs barked excitedly inside and a middle-aged man came to the door in a bathrobe, the undeniable uniform of the person wanting to be left alone. His voice revealed his hesitancy at seeing a stranger at his door as he greeted me. I went into my pre-prepared pitch, telling him my name, where I lived, and how I had admired his lemons for many weeks as I'd walked past with my dog. I asked him if they were indeed Meyer lemons and he said he didn't know. So I asked if I could perhaps buy some lemons from him, and he told me I could just take some since his family didn't use them since they were just renting the house. I wasn't clear why those two things were related, but I wasn't interested in asking. I had free Meyer lemons!

I thanked the man (I unfortunately can't remember his name) and picked a nice bag of lemons, being sure not to be too greedy. I could now enjoy wonderful, tasty, guilt-free organic local Meyer lemons! The experience was another good reminder that we shouldn't be so pre-emptively shy and distant from people, that we shouldn't be afraid to reach out to people, and that it doesn't hurt to ask for something when the worst-case scenario is being turned down and the best-case scenario is getting exactly what you want.

But the story doesn't end there. While I was happy about my free lemons, I wasn't sure if the man's offer extended to future visits. When my first approved bunch was finished, I wasn't sure what I should do next. Should I bother the family again and on subsequent visits whenever I wanted more? Should I make the convenient assumption that his offer extended into perpetuity and take lemons whenever I wanted?

For the next bag or two, I opted for a hybrid approach -- I would continue taking lemons, but I would only do so during the day when the family's missing cars indicated that no one was home. It was far from ideal, but I figured if any neighbors or passersby saw me picking lemons and questioned me about it, I could say that I had an agreement with the family that it was okay for me to do so, which was arguably true. But again, this was far from ideal.

I didn't want to ask the family again about my Meyer lemon rights, both because I still didn't want to bother them, but more because I was afraid they would say no. I desperately didn't want to give up my free lemons and wasn't sure what I should do. But one day, as I was harvesting a bunch of vegetables from my garden for a friend to take home, the obvious solution struck me. In exchange for my next bag of lemons, I brought the family a large bunch of Swiss chard from my garden and left it in a bag on their porch with a note identifying the greens and thanking them for the lemons. On subsequent visits, I would leave bags of additional garden greens like kale or collards, sometimes with recommendations on how to cook them. Even if I don't know the name of the family, they now know my name from the notes I leave.

Now I feel like I'm closer to my ideal arrangement for the lemons, and it's thanks to my garden. Something my garden constantly reminds me to do is to be generous, which is an admittedly easier thing to do when it offers me more vegetables than I could eat on my own. But in this case, it allows me to give back for something I'm getting for free. Now I am trading with the family, not just taking, where both of us get something valuable. Provided that the family actually eats the produce I give them, they must feel they are coming out ahead since they get some fresh, locally grown organic greens in exchange for something they don't even want. Conversely, I feel like I'm coming out ahead since the value of the lemons is most likely more than the greens I give the family. Isn't the definition of an ideal business arrangement one where both sides feel that they're getting the better deal?

I hope I can use the bounty of my garden to create more mutually beneficial relationships with my neighbors and others for their produce. I'll be much more eager and willing to knock on strangers' doors -- and get over my misplaced fear of doing so -- with the knowledge that I have something terrific and valuable to offer them. There's a house a block away with a vigorous fig tree whose branches hang over the sidewalk and whose fruit I've enjoyed on past walks, and the owners don't seem to do much harvesting, so I'll talk to them next time the figs are out. I may even get back in touch with a neighbor who I used to have dog playdates with who has a healthy mandarin orange tree in her backyard. I've also tried to be better about simply giving away produce to neighbors I bump into. There's something powerful and primordial about the act of giving food to a person, particularly when you've grown/raised it yourself. I'm sometimes embarrassed by how much effort it can take me to be generous with what I grow, always worried that I won't have enough for myself if I give away too much. But whenever I harvest some greens for myself or someone else, I can see that I've barely made a dent in what I have. I feel like my garden helps me be a better person.

But in general, if your neighbor has some visible fruits or vegetables growing that you're interested in, don't be afraid to ask if you can buy some. I'm guessing they'll say yes, and they may even give them to you for little or nothing. And if you can offer them something in return, particularly something homemade or homegrown, that business transaction could turn into something more -- a relationship that could continue to bear fruit (sorry) for years.

Follow my continuing adventures in urban gardening at YouShouldBeGardening.com.