Earlier this year my friend and colleague, Margo Rivera-Weiss, lost their father. The loving relationship I saw between this elderly Latino man and his queer, gender nonconforming child, touched and inspired me. Here is Margo's story in honor of their father, Jaime Rivera Valdiviezo. (Note: I am using "they" and "their" as gender-neutral pronouns.) 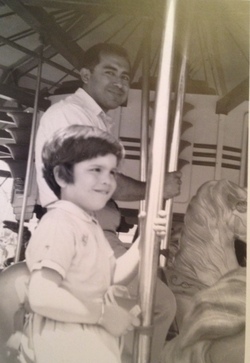 Jaime called Margo his "love child" because they were born out of a profound love. He was a hardworking, Catholic-raised man from Peru, who made his living as a cabinet-maker. Margo's mom, Elsie Zahler Rivera, was an independent-minded, Ashkenazi Jewish woman.

With one parent whose first language was Spanish and one who spoke only English, Margo grew up in a loving environment where they could be who they were with few constraints. "From the time I was 4, I remember wanting to look like my dad. I ran around in button fly jeans and white T-shirts, short hair, and sneakers and people often thought I was a little boy. I liked doing things that were considered boy things at that time. I never liked stereotypical girl things like playing with Barbies. I preferred playing sports in the street."

Jaime loved all living things. He had deep respect for the earth, animals and plants. This love extended to his child and fellow humans. He and Margo forged a bond in the garden, a magical place teeming with apple and persimmon trees, corn, asparagus, and squash. On weekends, they went to the nursery and picked out things to plant. With Margo as the hole-digger, they worked side by side with little need for words.

When Margo hit puberty, their mother began suggesting that they wear dresses in order to please their father. Margo got the message that Jaime wanted them to start acting more feminine, but nothing came of it. Margo had no interest in dresses, and neither parent made a big deal of it. 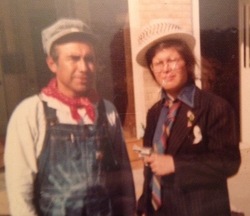 When Margo was fifteen, their mom Elsie lost her life to cancer. Both Margo and Jaime were devastated by the loss and found solace in each other. Jaime saw remnants of his wife in Margo, who was his only child, and sometimes called them "my little Elsie." He also supported Margo's involvement in sports by attending their high school volleyball and badminton matches.

Their bond remained unshaken until Margo came out to Jaime at age 18. The news wasn't taken well. They tried family counseling a few times, but when Jaime realized that it wouldn't "fix" Margo's sexual orientation, he refused to go back. Margo was disappointed, but never lost faith in Jaime's capacity to love. "It became something we didn't talk about. I refused not to be who I was. I would bring home whomever I was seeing at the time. I was in a relationship with a woman for almost 10 years. Dad got to know her and liked her, but never treated her like a daughter-in-law. I felt bad that he didn't fully accept me for who I was, but I knew he loved me."

Though Jaime wasn't comfortable with Margo's sexual orientation, love was always present. At one of their lunches together, Margo was upset about the breakup of their long-term relationship. Jaime's response: "Remember, your father always loves you no matter what." He was supportive when it mattered most. The two remained close and stayed in touch by phone every few days. 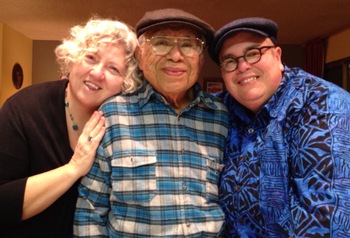 Margo married the love of their life, Hadas Weiss, in 1998. Jaime was invited, but couldn't bring himself to attend. According to Margo, it was just too far out of his comfort zone. Margo and Hadas married again in 2005 at the San Francisco City Hall when Mayor Gavin Newsome proclaimed that same sex couples could marry. They were among many couple whose jubilant faces were broadcast to millions of viewers on CNN. There was no call from Jaime that day, or for several days after and Margo knew it was because he had seen them on TV. It took weeks for him to call.

There was a big shift in Jaime's attitude after a visit to New York. When Jaime was in his late 70's his favorite brother Eliseo, who was also Margo's Padrino (godfather), was sick with cancer and nearing the end of his life. At the urging of Hadas and Margo, Jaime agreed to make the trip from California to New York. For the first time, Jaime visited his brother and family with Margo and Hadas.

Jaime was probably nervous that his family would judge him, but that didn't happen. The Padrino who had always been kind and loving told his brother how wonderful it was the Margo and Hadas had found each other, and how happy he was for them. Margo looked at Jaime and saw both surprise and relief on his face. His brother's words reassured him and told him that he had nothing to be ashamed of.

After that trip, Jaime embraced the relationship between Margo and Hadas. He asked about Hadas and when her birthday was and began sending cards. He also asked about the couple's anniversary date and sent cards celebrating their marriage. Over time, Margo grew to understand just how big this change was for Jaime. "In his mind, marriage was still between a man and a woman, but he also realized the depth of our relationship and the love we had for each other. He loved us both. Part of me was surprised, but because we had so much love with each other and with my mother, I just always thought it would happen." 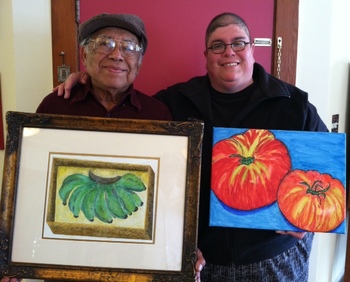 After he retired, Margo invited Jaime to try his hand in painting. From then, until Jaime's death, art became the activity they loved to do together.

Rest in Peace, Jaime Rivera Valdiviezo, and thank you for gracing us with your presence, your child, and your beautiful art.

For information and resources for parents, caregivers, providers, educators, and youth, see Out Proud Families.

Coming this September: One of a Kind Like Me/Único Como Yo, a bilingual children's book about a little boy who wants to be a princess in the school parade.

More:
Parenting gender-nonconformingParentsfatherhoodlgbt
Newsletter Sign Up
Raise the kind of person you'd like to know
Subscribe to our parenting newsletter.
Successfully Subscribed!
Realness delivered to your inbox