Many men exhibit symptoms of the Peter Pan syndrome, hoping that somehow they won't ever have to grow up. If they can cling to the vision of Neverland that's in their minds, maybe they won't have to leave the video arcade, go to college, or get a job.

Some cultures treat the passage from boyhood to manhood with a specific ritual. Whether it be a bar mitzvah ("Today I am a man") or the kind of genital mutilation (adult circumcision) that proves one's bravery, after certain rituals there is no turning back.

The responsibilities which accompany adulthood, however, can be juggled with astonishing levels of skill and/or denial. In some cases, a young man's procrastination can be enabled by doting mothers who go out of their way to spoil their sons. In others, the firstborn male can do no wrong and, as a result, is often granted an extraordinary amount of behavioral leeway.

Two new films screened at CAAMFest 2015 approach the subject from wildly different perspectives. One is a rowdy farce, written and directed by impressive young talents. The other offers a tender look at a young man who finds himself thrust into becoming the person responsible for keeping the family business afloat. Certain similarities, however, are unavoidable:

Written by Justin Chon and Kevin Wu, Man-Up! quickly makes audiences wonder if they are watching a Hawaiian spinoff of Dumb and Dumber for a younger generation ("The Odder Couple"). The creative team plays a pair of 19-year-old Asian-American slackers whose lifestyle consists of going to the beach, playing video games, and shouldering as little responsibility as possible. Since most of their social skills have been learned from television (rather than from their parents), their ridiculous sense of confidence (coupled with an innate ability to fuck up any situation) knows no limits. 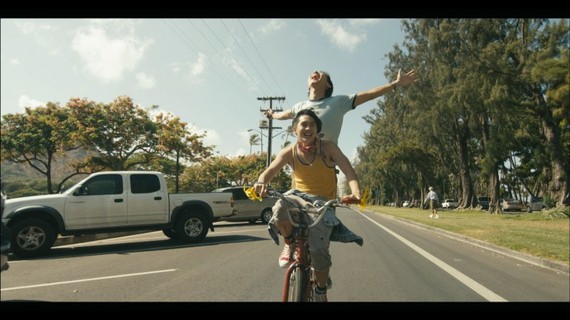 Martin (Kevin Wu) has been looking forward to a summer of kicking back and being cool. However, his idyllic existence is shattered when his very white Mormon girlfriend, Madison (Galadriel Stineman), tells him that she is pregnant. Thrown out of his home by a dragon mother who wishes she could "wash the dumb off of him," Martin moves in with his best friend, Randall (Justin Chon), whose mother (Una Wilding) has flown off to Europe with her boyfriend, leaving Randall home alone to take care of their house. 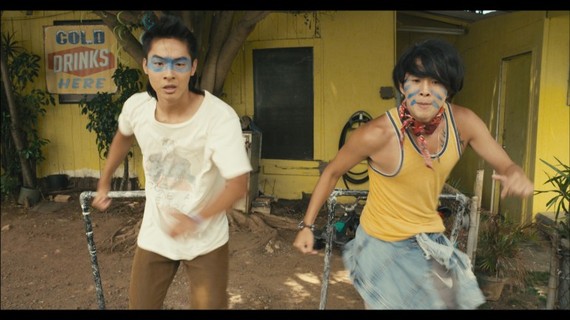 Whether the two man-boys attempt to play with children at a local playground, try their luck at babysitting, or attend Lamaze classes, Man-Up! has the kind of frenetic energy and goofy hilarity that is bound to have audiences laughing out loud. It's the perfect buddy film for idiot dudes and bros.

In addition to Kevin Wu and Justin Chon, there are solid performances by Parvesh Cheena as a gay labor coach, Nichole Bloom as his attractive assistant, Kayla, and Samantha Futerman as Kevin's precocious kid sister, Regan (who has already been accepted to medical school). Dion Basco has solid moments as Randall's baby-toting neighbor, Tarike, while an uncredited actor scores some great comic hits as Martin's severely henpecked father.

The writing for Man-Up! is fast and furious, with the two leads delivering hilarious portraits of two Asian-American doofuses. Not only does this film have "sequel" written all over it, I wouldn't be the least bit surprised if Man-Up! gets developed into a sitcom. Here's the trailer:

I wish I could be as enthusiastic about Love Arcadia, an earnest attempt to combine a young man's coming-of-age story with an awkward romantic interest. Despite Theresa Chiu's well-plotted story and carefully-defined characters, her script suffers from the kind of clumsy dialogue that sounds like a long list of clichés strung together with bone dry results. 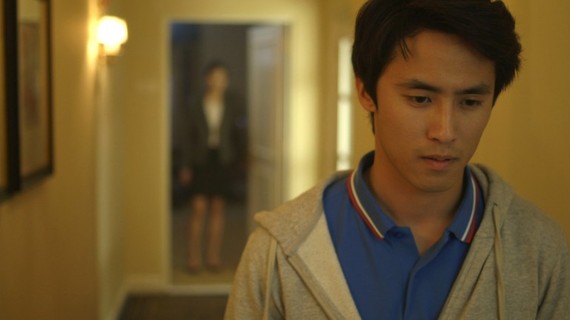 The extremely appealing Anthony Ma stars as Jake, a recent high school graduate living in the small town of Arcadia, California whose best friends -- Samantha (Lana McKissack) and Louie (Arvin Lee) -- will soon head cross country to attend college in New York. Jake's family's business is a bubble tea shop at a suburban shopping mall that is being bid upon by a Taiwanese-American real estate developer whose daughter, Joanna (Michelle Farrah Huang), is a lonely ice maiden with no friends. 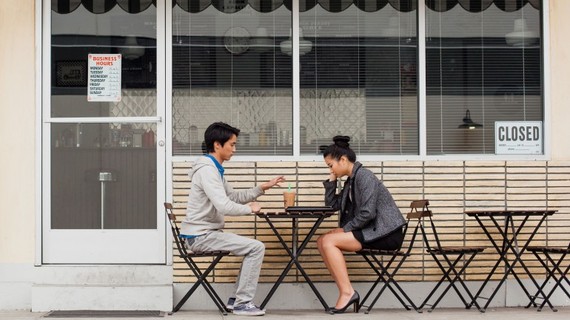 Jake is the kind of easygoing teenager who loves suburbia, loves his family's business, loves the mall where it's located and (although he applied to college and was accepted) has no desire to venture outside of his Arcadian comfort zone. By contrast, the worldly Joanna has the heart and soul of a handheld calculator and is desperately trying to be "Daddy's little girl."

Complications quickly arise when Jake discovers some old photos left behind by the owner of the Joy Lee Bakery that suddenly closed ten years ago. It turns out that Joy Lee (Joanna's mother) succumbed to cancer. Her grieving husband (Clint Jung) closed up shop and moved back to Taiwan where he became increasingly robotic and emotionally withdrawn from his young daughter. Now 18, Joanna is trying to show her father that she can handle a complicated real estate deal. 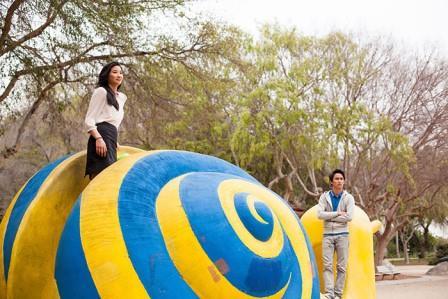 Joanna gets thrown off her game when an attractive boy shows up who simply won't leave her alone. Just when things are getting cozy between them, Jake is called to the hospital because of a family emergency. With his family's business threatened by an impending eviction, his uncle, Chef Wu (who stopped taking his medication because it made him lose his sense of taste), recuperating from a heart attack, and a hint of romance in the air, Jake has to grow up fast and try to outmaneuver the curiously predatory moves being made by Joanna's father. 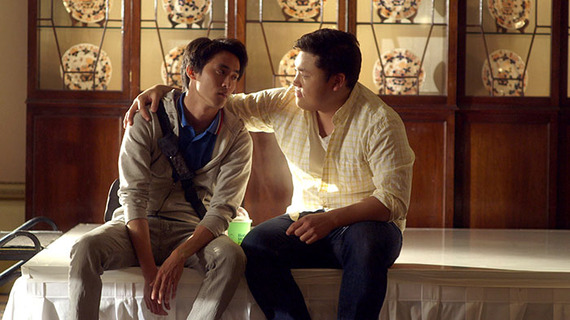 Chiu's story line combines real estate intrigue with family stress, a clumsy romance with some fierce negotiating tricks. The subplots and their resolutions are quite impressive. Near the end of the film everyone gets cake! The only problem for me was the wooden dialogue.