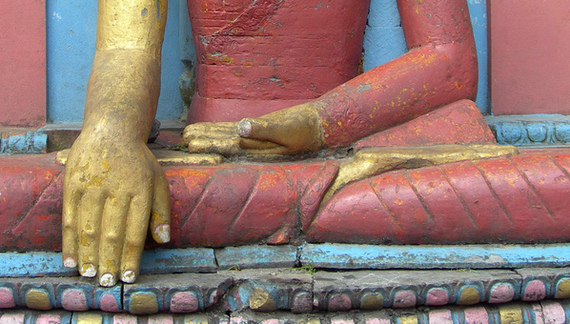 The essence of vipassana meditation -- the Buddhist root of mindfulness -- is to see things as clearly as possible without superimposed narrative, without the colorations of personal history, free from the desires and aversions that steer even the most subtle reaches of mental life. It is this practice I hone hour after hour, day after day, in the long weeks and months of a meditation retreat.

But sometimes, my meditation flows organically into something that feels more akin to prayer.

I do not engage in prayers of "petition" -- seeking divine intervention for personal gain. Nor do I do pray for the benefit of friends and beloveds, although I will offer them loving-kindness (metta) as generously as I can. But if I am able to do so with emotional clarity and a depth of sustained concentration, I sometimes pray for the world.

Specifically, there are times I corral my mental energy into a vision of global awakening. In those moments, I invoke an era where humanity has moved beyond greed, hatred, and ignorance. I meditate on contributing whatever I can to an amorphous energetic field, that may or may not exist, to free all sentient beings from suffering. I try to envision this awakened world in as much detail as possible.

Call it meditation, call it prayer. Why quibble?

I used to wonder, when I first stumbled into this practice: Am I cheating, breaking the rules? I'm studying Buddhism. I'm supposed to meditate, not pray, right?

That first time, the prayer/meditation arose organically and spontaneously. It lasted a few minutes before a harsh internal critic slammed me down. Not only was this not vipassana, it was also way too big -- larger than my zone of confidence. Envisioning global awakening? Get real. You get pissed off at yogis who breathe too loud. Who do you think you are? What arrogance, to think that I was fit to approach something as lofty as global awakening.

There is a story about the final hours leading to the Buddha's enlightenment. Here's the version I've heard: Siddhartha Gautama was meditating through the night, having vowed not to stop until he attained full awakening. The great tempter demon/god Mara scoffed that an ordinary human could, or should, attain this.

In the course of that night, Mara attempted three ploys to knock the Buddha-to-be off track. First, Mara offered him a harem of his beautiful daughters. Siddhartha was not deterred. Second, Mara promised him unlimited power -- imperial rule of the universe. Still, Siddhartha remained firm. Then Mara took out his greatest weapon: our human predilection for doubt and insecurity. Who are you to think you can awaken?, he taunted Siddhartha. You are not a god. What nonsense. You have no right. Enlightenment? This does not belong to you.

At that point, Siddhartha Gautama raised the palm of one hand upward to the heavens and placed the other hand on earth (this pose, "calling earth to witness," is one of the most recognizable of all Buddha images). He summoned the full brunt of our human existence, flawed yet perfect, earthly yet sacred -- the eternal paradox, the ultimate koan -- and proclaimed, "I am a man. Awakening is my human inheritance. This is my birthright." Defeated, Mara had no remaining weapons in his arsenal. Claiming the natural entitlement that was his simply by dint of humanness, the Buddha awakened.

The audacity of meditating on global awakening! Who am I, who is anyone, to do so? Me -- so damaged, so unaware, such a broken vessel.

Yet who am I not to?

Praying for peace, envisioning the end of suffering, imagining a world free of greed, hatred and delusion -- these are all within the sphere of our human possibility, our human inheritance. Flawed and off the mark as we may be, unworthy as we may deem ourselves, each of us has the permission, the right to do so.

Does it make a difference? I don't know. I distrust those who glibly claim that it does (I'm even less tolerant here than of loud breathers). But I am open to the possibility -- just a sliver of a thread of a hint of a possibility -- that praying for the well-being of the planet might matter, that nursing the vision of an awakened future for humanity might help bring it about. Prayer and meditation may well generate wise action, but perhaps also matter simply in their own right. That's enough for me. It has to be; from where I sit, more cannot be known.

Besides, envisioning an awakened world may not be a matter requiring special permission or needing any guarantee.

Look around and pay attention: It may be a collective necessity.

(I spent the winter of 2012 in silence on a self-guided retreat at the Forest Refuge, a Buddhist meditation center in rural Massachusetts. This twice-monthly blog explores how intensive retreats offer a compass for everyday life).