Author's note and disclaimer: This post discusses medical stuff, but I am using (mostly) lay terms to describe the experience.

When my 22-year-old son John returned home to California from a summer job in New Hampshire, I noticed a mole on his face that looked suspicious. It was on his right cheek, the same place where he'd had a mole removed three years before.

"You should get that checked," I said.

I have a lot of moles (sorry for the visual), fair hair and skin, and my three sons have inherited these traits as well. We've been casually vigilant about sunscreen, and I encourage them to visit the dermatologist regularly for mole checks.

The mole on John's cheek was not healing, and finally, after some nagging from me, he finally had it checked a little over a month ago. A biopsy of the mole revealed that it was a malignant melanoma. It was a deep, fast-growing type, said the dermatologist in so many words.

John did not have the same fear of melanoma that I had. When I was growing up, a man in my dad's office, Mr. Mollner, died of melanoma, and it happened really fast. Then when I was in college, a classmate, the quarterback of the football team, had a malignant melanoma. He noticed it during football season and thought it just sore from rubbing against his football helmet. He died just a few weeks after graduation.

I'd had a melanoma when I was 50, roughly nine years ago. They caught it before it got into the lymph system, which is how melanomas spread. Still, the surgery was traumatic for me, as it required a wide excision by a plastic surgeon, and it was on my neck. The long angry scar has faded with age, but I wore scarves for a good five years, some better looking than others.

It was clear after reviewing John's pathology report with the dermatologist that his melanoma was a lot scarier than mine had been. He needed a sizable excision around it, also by a plastic surgeon, and a sentinel lymph node biopsy to see if cells from the melanoma were spreading around his body. Other medical types that we shared the pathology report with winced visibly when reading it.

Which scared the hell out of all of us, including my sweet son with the beautiful face who is a friend to everyone.

John's surgery happened a month ago. Some results came back that look hopeful, but John is being evaluated at a Melanoma Clinic in San Francisco. John is, as they say, in good hands, and we are optimistic.

By the way, you will notice that John has very long hair. I have been suggesting that he get at least a trim. Or even more than a trim. He smiles and thanks me for my input. He'll think about it.

But now the hair -- or anything else -- just doesn't seem that important anymore. 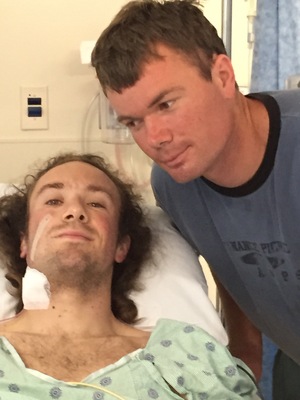 John and his big brother Matthew