Today as I stood in line at Target (my home away from home), I felt the eyes of many strangers on me -- as I usually do when I walk around with a cart full of babies. Walking around in public with twin toddlers is no easy task. Not only do you have to keep two fickle little people happy, but you have to concentrate and remember everything on your list, stop to say hello to curious strangers, and break up baby fights (hilarious and annoying at the same time), all while bending over every 30 seconds to pick up a toy/food item that was thrown out of the cart.

In a desperate attempt to get everything I needed, I strategically placed several obnoxious and flashing toys in the front of the cart with my girls. I wasn't really finished shopping, but I could sense that my time was running out. Toys and pretzels began to fly out of the cart from every angle at an increasingly rapid pace. Many people passed by our red, two-person, marching-band-piano-cart (and when I say piano, I mean that every time two toddlers furiously strike the keys, you hear the not-so-soothing sounds of a cat meowing loudly to the beat). Some people smiled. Some said hello to my girls. Some looked at us and quickly moved on. I get it. We were making kind of a scene.

But someone stopped me briefly -- a mom with two girls tagging behind. She came right up to me and squeezed my arm. Without hesitation, she said: "You're doing a great job, Mom."

We left the store with one less shoe than we arrived with (babies), a food crusted sweatshirt (me), two new stuffed animals (like we need more of these), six plastic big girl cups (probably won't be used for another year), and some of the items on my list. As I pried bits of pretzels and string cheese out of the fists of my babies, I realized that I forgot the thing on my list that inspired my trip to Target in the first place.

Her words came at the right time -- and hit me exactly as the strain of my week began to mix with the exhaustion of my day. The time of day where I felt so close to the end, but still wondered if I would ever actually make it to my bed and Netflix.

I don't know her, and she doesn't know me. But her words mattered.

Because I believed them. 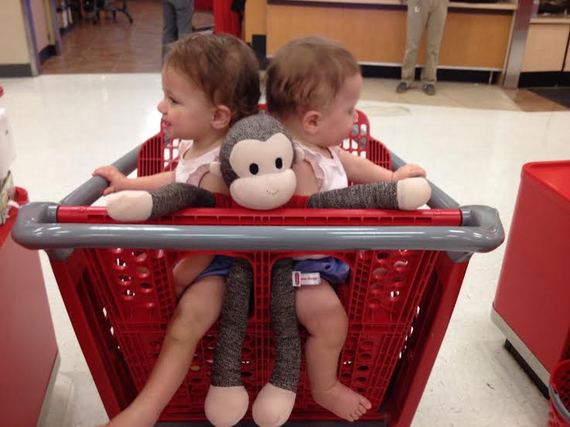 Blogging my way through life with twins plus one.