Back in December I asked my oldest son what he wanted for Christmas. He only had one request:

"I want to meet Blaine and sing and play the guitar with him."

My son has had a huge crush on Blaine, a popular character on Glee played by Darren Criss, for two years now. Despite the passage of time, his puppy love for Blaine (or "my boyfriend," as my son likes to call him) has gone unabated. It's cute and sweet, but it left me in a bit of a conundrum.

"Baby, there are some things Mom just can't do," I tried to tell him, but he wasn't having any of it. He knew I could make this happen. I finally ended up saying, "You can't ask for people for Christmas." This seemed to satisfy my kid, and he let the subject drop.

Since I started writing about my kid and his crush, people often asked me if my son had ever met Darren Criss. I usually laughed off the question. Of course he hadn't. We're a family from the Midwest, where television actors are the furthest thing from our reality. My kid had never mentioned wanting to meet him anyway -- until Christmas, that is.

Fast-forward a few months, and Darren Criss announced a 16-city concert tour. The tour wasn't coming to our city, but it was coming within (long) driving distance. My husband and I looked at the announcement and then at each other. Could we make this work? It wouldn't be easy or cheap, what with the cost of the tickets, gas and an overnight hotel stay, but we both knew there wasn't really an option. We had to make it work.

We had a discussion with our son about the difference between Blaine and Darren. When he was 6 years old, it had been beyond him, but now, at a wizened 8, he had a good handle on how television shows are made, so the conversation included a lot of "I know, Mom" and eye rolling on his part. My kid is also very shy and doesn't often take to strangers quickly or like crowds. We talked with him about what it means to go to a concert and just how many people would be there. But he was resolute. If his "boyfriend" was going to be there, he would put up with anything. And that was that: We were going to Chicago.

And the world is a pretty crazy place. The posts I have written about my son and our family have been fairly popular and evidently made their way to the kind of people who can make things happen. After a couple of emails and phone calls, my kid was not only going to his first concert, but he was going to meet the man himself, Darren Criss.

My son and I took the long car trip into Chicago and got settled in our hotel and ready to go the venue. We were early, so there was time to walk around downtown. My son was having none of it. About halfway to The Bean, he refused to go any further. The concert was the other way, and we were going to be late, and they were going to start without him, and he was going to miss it. That could not happen. So we walked to the venue and spent our time wandering around the House of Blues.

We wasted the time any way we could. We walked the long line of people waiting for the show. We got our shoes shined. We played "tickle spiders" in the lobby after my son started getting bummed out by just how slow time was passing. We looked for pigeons to catch. (This never worked, but he had fun trying, especially when he chased two into a group of teenage girls who were waiting for the concert. They all screamed at the random bird attack. Sorry, girls!)

Eventually, the time did pass, and we were brought up to meet him. My kiddo was so nervous and anxious that he was practically jumping out of his skin. And then he was there, and my son met his first love. It was adorable. Darren Criss was charming and lovely, and my son was so shy but happy. As for their conversation, that's not really mine to share. Maybe someday, when my kid is older, he'll write about it, but until then, it remains as it should be: between him and Darren.

When it was my turn to talk, I found my normally sure-spoken self decidedly absent. What could I say to this young man who meant so much to my kid, this young man who, by playing a television character, had helped lead my son to tell me about his orientation and, by extension, helped change the trajectory of my own life toward activism? "Thank you" felt so insufficient, but it was all I had.

When our chat ended, there were hugs all around, and we headed back down to wait for the show. This was the part I was worried about: the crowd, the craziness. But it turns out that I shouldn't have worried at all. We got to watch the show from a location where my son could see everything and not be jostled around by those he didn't know. My kid spent most of the performance on my lap, taking pictures from time to time.

Then, in the middle of the show, Darren began to play one of his original songs, "Not Alone." The crowd quieted for this sweet, sentimental ballad. I snuggled close to the boy on my lap and sang the lyrics into his ear:

"Baby, you're not alone,
'Cause you're here with me,
And nothing's ever gonna bring us down,
'Cause nothing can keep me from lovin' you,
And you know it's true.
It don't matter what'll come to be;
Our love is all we need to make it through."

Those lyrics express what I hope my children feel from me as they grow up, and what I want my boys to take with them when they eventually leave us. They describe how I wish all parents would feel for their kids. I was overwhelmed, and as trite as it sounds, for a few minutes the world shrank down to just us, cuddled close, me singing to my firstborn as his "boyfriend" played the piano. And it was perfect.

After the show, we made our way back to the hotel, and after an extensive discussion of which superhero is the fastest (The Flash won), we went to bed. My son gripped me into a fierce hug. "Mom," he said to me, "meeting Darren Criss was all the trillions times better than a hotel with a pool." I'll take that as a "thank you."

To all those who helped make this magical night possible (you know who you are), thank you. You helped prove to my son that I can, without a shadow of doubt, do anything. (I guess I should start working on time travel next.) 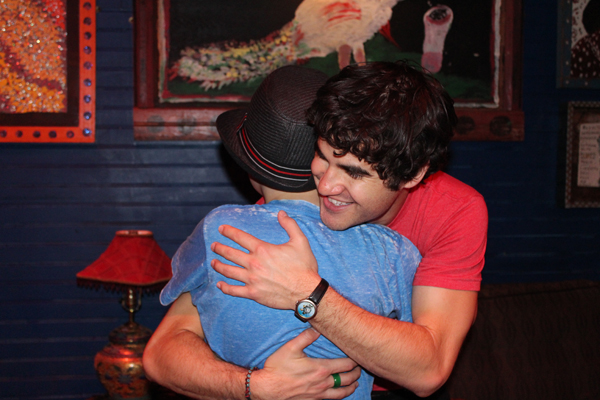