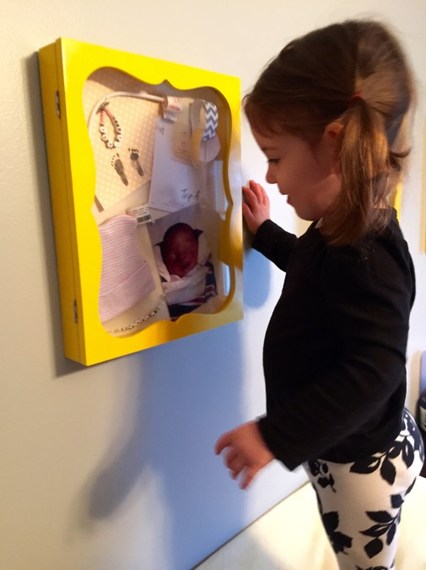 Two simple words. That's all it took for a flood of memories and grief to come rushing back. With two little words, I was brought back to June 23, 2013, the day I delivered my triplets and the day my first child died.

Our surviving triplet, Peyton, has a special bedtime routine that includes saying hello to her brother and sister. Above her changing table hang three shadow boxes, one for each triplet. Inside, pictures are on display along with other hospital keepsakes from our 22-week micro preemies. Peyton loves to look at the shadow boxes and often says "Hi Abby" and "Hi Parker." But this night was different. As Peyton said hello to Abby, she looked closely at the picture, and then with her little voice she said, "Wake up."

How do you explain to your daughter that her identical sister will never "wake up"? How do you tell her that her sister lived for only hours, and her brother for only two months? How do I explain that we never saw Abby's beautiful eyes, because at 22 weeks they were still shut? In that moment, tears began to well up and a massive lump formed in my throat. My sweet child is now starting to comprehend things. And just recently, Peyton found her voice, a quiet and beautiful sound that takes me by surprise.

I never imagined that two innocent words could be so sweet and endearing, yet so unbelievably heartbreaking. As Peyton told her sister to "wake up," my heart swelled with pride. She remembers her brother and sister, sharing a special bond that dates back to the early days in the womb. It was at that moment I realized we will someday have to explain to Peyton why her brother and sister are no longer here. It's a conversation I knew would eventually come about, but never did I imagine that she could be asking this early on in her young life.

Our two angels will always be a big part of our family, and I will always be their mother. I don't know what I'll say when the time comes or how I'll help Peyton understand, but I know we'll be ready. As for those two little words, "wake up," it's a moment I will remember and cherish forever. Because in that moment, all my fears went away, my motherly instinct taking over. I looked at Peyton and smiled as I said, "Abby is sleeping in heaven." I then wrapped my arms around my precious daughter and gave her a hug, not wanting to let go. As tears rolled down my face and onto my child, Peyton quietly whispered back, "Heaven."

More:
heaven tripletschild lossParentsnicu
Newsletter Sign Up
Raise the kind of person you'd like to know
Subscribe to our parenting newsletter.
Successfully Subscribed!
Realness delivered to your inbox