Most people think that Star Trek-style nuclear rockets are a thing of the future, but the fact is we had them in the 1960s... and gave up on them.

The Nuclear Engine for Rocket Vehicle Application...NERVA... program was a joint effort between NASA and the US Atomic Energy Commission, and managed by the Space Nuclear Propulsion Office. Los Alamos Labs had begun work on nuclear rockets in 1952 and this research accelerated so quickly that by 1961 the Marshall Spaceflight Center started using nuclear rockets in their mission planning, with the first launch to be in 1964 as a final demonstration of the space-worthiness of these engines. The NERVA engine was built by Aerojet and Westinghouse. The first of these actually built and tested in a spaceflight configuration was the Kiwi-B4 engine that produced 70,000 pounds of thrust. The NERVA NRX/EST engine in 1966 ran for two continuous hours. The NERVA-XE engine tests ran for 115 minutes and as a result, it demonstrated that nuclear engines were now flight-ready as a technology. The nuclear engine program had demonstrated thrusts as high as 250,000 pounds, 90 minutes of continuous and controllable thrust delivery, and thermal power equal to 4,500 megawatts.

The plan was to use a NERVA engine as the third stage of the Saturn V rocket and plausibly get to Mars by 1978 and even use this engine as the work-horse to establish a large lunar colony by 1981. These plans were canceled in 1972 once President Nixon came into office and decided that the Saturn V and the Apollo program were no longer needed to prove US space superiority in the Cold War. Without the Saturn V, there was no way to place the heavy nuclear engine into space, even though once there it would dramatically out-perform any chemical rocket. Nuclear engines would be used as the engines for space 'tugboats' that would ferry cargo and humans from low earth orbit to the moon and beyond. 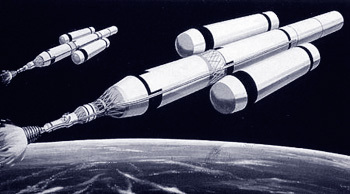 A conceptual illustration of a spacecraft for a manned Mars mission proposed by NASA's Wernher von Braun in August 1969. Two spacecraft would make the trip in tandem, each one powered by three NERVA-type engines. (Image courtesy: NASA).
The Space Nuclear Propulsion Office planned to build ten nuclear engine-based vehicles, six for ground tests and four for flight tests, but the development program was delayed after 1966 as NERVA became a political hot-potato in the debate over a Mars mission. The nuclear -enhanced Saturn 5 would carry two to three times more payload into space than the chemical version, enough to easily loft 340,000 pound space stations and replenish orbital propellant depots. Ultimately the NERVA program became so closely linked to plans to go to Mars, that when Congress finally balked at the expense and folly of going to Mars, the NERVA program no longer had a 'customer' to serve. The NERVA program was finally terminated altogether on January 5, 1973.

So for decades, the popular story seemed to be that we didn't have nuclear rocket technology and would have to get by with impressive chemical rocket-based systems like the Space Shuttle. But then something amazing happened. In 2000, NASA proposed Project Prometheus whose goal was to develop nuclear-powered systems for long-duration space missions. Now, this wasn't nuclear engine technology, but the far more practical power plant technology. NASA had for decades been shoehorned into missions that used heavy solar panels or 'RTG' to generate a few hundred watts to run scientific equipment. Now NASA wanted to leap into multi-kilowatt systems based on small nuclear fission piles.

For the Jupiter Icy Moons Orbiter (JIMO), a spacecraft designed to explore Europa, Ganymede and Callisto, NASA intended to use the first of what they hoped would be the new generation of mini-reactors flown in space. The reactor would heat a fluid and run a steam turbine to generate electricity. The electricity would then power scientific instruments and an ion-propulsion unit. But this was not to be either. The JIMO mission was cancelled in 2006, and also canceled was the Prometheus Project.

NASA chief, Mike Griffin, told a U.S. Senate subcommittee in May 2005 that JIMO was in his opinion, "too ambitious to be attempted." Instead, the Juno mission to Jupiter was funded, and this $1.1 billion spacecraft carries huge solar panels to generate its electricity using conservative 'off the shelf' technology. 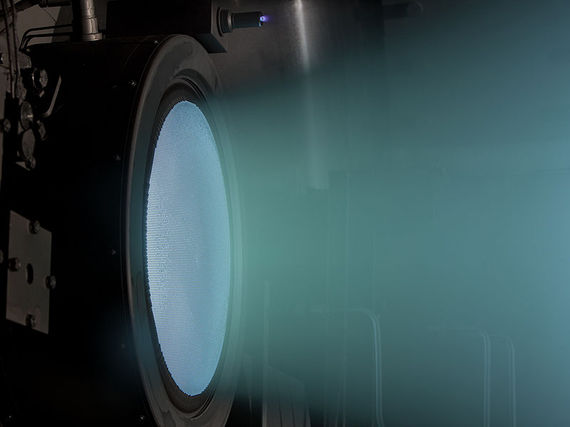 The NEXT ion engine in operation.

But at least there are ion engines!

Nothing is ever lost, so at least in principle nuclear rocket technology is ready to go just as soon as we can decide that we want to do more in space that just the limited capabilities that chemical rockets allow. Meanwhile, ion propulsion is being used by NASA increasingly, and with spectacular results. Three NASA missions, SERT-1, Dawn and Deep Space 1, used ion engines to get around in the solar system. Although the thrust of these engines is measured in ounces not in kilopounds, the thrust can be maintained for weeks, months and years, which steadily builds up enormous speeds. For example, it took four days for the Dawn spacecraft to accelerate from 0 to 60 mph using a thrust of just 0.3 ounces. 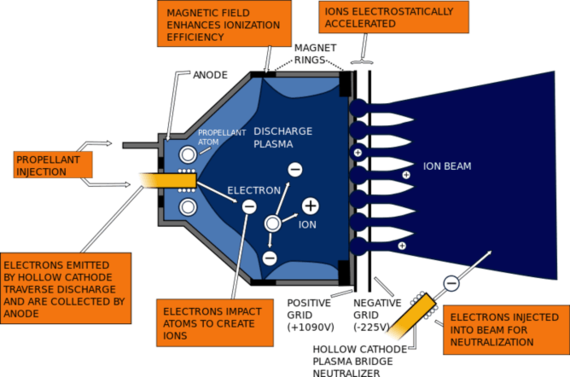 How an ion engine works (Credit NASA)
SERT-I and II launched in 1964 and 1970, verified ion thruster technology in space and ran for up to 3700 hours. This technology was then used on the Deep Space-1 mission.

The Dawn mission, launched in 2007 traveling a total of 3 billion miles, has now visited asteroid Vesta (2011) and dwarf planet Ceres (2015) using a 10 kilowatt ion engine system, 937 pounds of xenon, and achieved a record-breaking speed change of 10 kilometers/sec, some 2.5 times greater than the DS-1 spacecraft.

The NASA NEXT program in 2010 demonstrated over 5.5 years of continuous operation for a 7 kilowatt ion engine. It used 1,900 pounds of xenon and produced a thrust of 0.8 pounds.

Basically, the thrust you get depends on 1) the voltage used to accelerate the ions, controlled by the wattage of the engine, 2) the rate at which you pump the ions through the engine and 3) the mass of the ions. Currently we are using a few thousand volts, a few kilowatts, xenon atoms with an atomic mass of 131, and a low-pressure flow rate of about 5 ounces per hour. This gives you a thrust of just under one ounce. Imagine what you could do with a megawatt engine and a 100,000 volt potential with a mass flow rate of 1 kilograms per day and a thrust of 100 pounds! (well,these numbers may not be consistent with each other, but you get the point!) Now we are talking getting to Mars in a week or less!

These are baby steps, but they prove loud and clear that the only thing limiting 'Star Trek' rocketry is our human will to explore and dream. These are qualities in short supply on Capitol Hill and by American adults in general, but we can no longer hide behind the lame excuse that we just don't have the technology! We do...we just don't care.