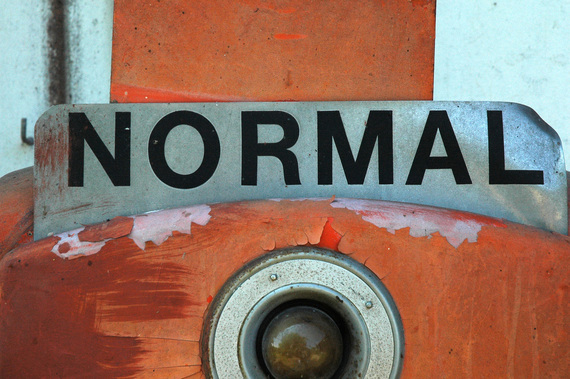 We all know what it's like when new labs are ordered for our kid. I think we probably all react in the same way: gut clenched, inhaled but not exhaled breath, then days waiting for results, alternating between dread and hope.

My friends with older kids and I have talked about the cumulative effects of caring for a medically challenged child. Over time, the energy needed to properly care for the child diminishes, seeping out of our bodies like air leaking from a balloon. The cumulative effect of tests like blood work is that we know, with horrifying clarity, that sometimes there is already a new diagnosis lurking in our child that we didn't even know about. We know as we receive the call from the nurse that our lives can change in an instant.

Last week during a visit with the developmental pediatrician, I told her that Caleb's overheating issues are escalating. He overheated one day this winter when it was 45 degrees out. Years ago I was told by a neurologist who was treating Caleb that this overheating problem can be fatal. The cumulative effects of trying to keep Caleb stable are constant vigilance and its antithesis, complete exhaustion and fear.

In the past, we've seen other neurologists, endocrinologists and thyroid specialists, all of whom have tried in vain to figure out Caleb's overheating problem. It goes beyond simple Anhydrosis, which is the inability to sweat. Caleb's feet sweat but not enough to cool him properly. Nothing else on his body sweats so heat is trapped, making his extremities bright red and leaving him lethargic and sick. I was told if he is left in this state, his internal organs will cook themselves, with no outlet for the heat.

Caleb, with his limited communication, can only tell me if he's too cold (which is also a health problem for him). He can only tell me that he was hot, not that he is hot. When he's cold, he now knows to get a sweatshirt or a blanket. But when he's hot, he suffers. Being too cold or too hot affect his temperature and it can sometimes take days before he returns to normal.

One doctor wanted to cut into Caleb's sweat glands to examine his sweat glands and see if he could learn anything more about this uncommon and dangerous condition. I asked him if he would then be able to fix the condition and he said no. I responded that we would not be going on that particular exploratory mission.

Last week, at the end of the visit with the developmental pediatrician she noticed that we hadn't had labs performed in a few years. She went down an impressive list, calling for very specific tests that could indicate failure in autonomic functions of the body like sweating. She added a few other tests since we were going to be sticking him anyway and we threw up a prayer that one of the tests could provide an answer.

I took Caleb right to the lab and, champ that he is, he watched the needle go in and counted the five vials that were drawn. He so does not get that bravery from me.

Yesterday Caleb and I had just left his therapist's office. We were heading home so I could start dinner and he could decompress with his iPad. Caleb chose a rap station and we were just be-bopping along when the phone rang.

Caleb is practically psychic when it comes to ringing phones. He can tell if it's his sister, his grandparents, even the name of which friend of mine is calling. It's a little freaky. When the phone rang, he didn't know who it was. He put his hand on my arm and looked fearful as he said, "Who is it?" I told him it was his doctor and answered the phone.

What she told me swung me away from the worry that our lives could change in an instant. Her words swung me so quickly that I felt I was on one of those round things at the playground where you hold a side and run and run until you hop on and spin forever. I felt like I was being thrown from that piece of equipment.

"Caleb's bloodwork show that he is remarkably normal," she said.

I squinched my face up and said, "What?"

All of his labs, testing all of those functions, were within the normal ranges for a 19 year-old young man.

This is normally great news. This is normally reason to celebrate. I can count on one hand the times when Caleb has been referred to as normal. In fact, we only use the word typical or non-typical when referring to Caleb or others because normal has some unsettling connotations. But for the purposes of this blog, we'll go with normal.

So why was I frowning? Why did I get the sinking feeling in my stomach that I usually get when given dire results?

We are no closer to understanding why Caleb overheats, why he will sometimes get off an air-conditioned bus with red hands and his temperature two degrees above normal. We are no closer to being able to help him. The magic potion I expected to be presented to us after all the bloodwork turned out to be only ashes blowing on a sidewalk.

I thanked the good doctor and hung up the phone, chuckling to myself.

"You want things to be normal. This is good. What is wrong with you? You should celebrate that no new diagnosis popped up today which would require changes to our already overly-complex daily routine."

I grew silent, feeling tears slipping from the corners of my eyes. I have to wipe them away quickly, before Caleb sees them, or they will throw his day for a cruel loop and take him hours to calm down.

But I wanted an answer. I wanted a treatment or a plan that could help this most amazing young man. I wanted to be able to fix a problem that rules over every second of our lives.

Selfishly, I wanted to find a way that Caleb could actually be typical. I wanted to live in a home with the blinds open during the summer instead of having window-tinted windows with blinds closed and curtains over them to keep the temperature down. I wanted to be able to take Caleb to the grocery store at any time, not just at 8 AM when it's still relatively cool.

I wanted to unlearn how to automatically, precisely tell the temperature of every room we walk into. I wanted for Caleb to be able to participate in Special Olympics, not sit out due to heat like he has for three years. I wanted to be able to go from early spring to mid-autumn without living in a constant state of gut-wrenching fear that Caleb could overheat. I wanted to taste a little bit of that remarkably normal life.

We were still driving when Caleb grew tired of the rap song and switched to the 80s channel which was playing Depeche Mode, another favorite of his.

"Yes!" he smiled, turning the song up.

I stole a glance at him as he was watching traffic go by. I wanted to reach out for his hand but he hates that so I don't do it. My heart reached for his heart and I realized within that bond that this is our normal. It has been since he was born.

Nothing changed yesterday. I already know how to handle this particular overheating issue in a way that has kept him safe for 19 years.

Our normal, which is not anyone else's normal, is still our normal. Everything was the same as when we woke up yesterday. There are no new routines or devices or medications to add to the daily choreography of caring for Caleb. Phew.

And for that, I am profoundly grateful.

More:
ParentsAutism
Newsletter Sign Up
Raise the kind of person you'd like to know
Subscribe to our parenting newsletter.
Successfully Subscribed!
Realness delivered to your inbox