About a year ago, I was sound asleep one night when I heard my daughter creep into my bedroom.

She was shaking and crying, and even in the dark I could tell she was troubled. Since she had a friend staying over, I was extra-worried. In choking sobs she told me they'd done something terrible. I dreaded what I'd hear next.

It took me a minute to confirm that everyone was all right, that no eyes had been poked out or worse. The way my daughter was acting, this sounded tragic.

I hugged her and told her it was OK, that she owed her sisters a big apology but had hopefully learned a lesson. Together we went upstairs, and, using a soapy washcloth, we cleaned her sisters' faces. Thank heaven for washable markers. 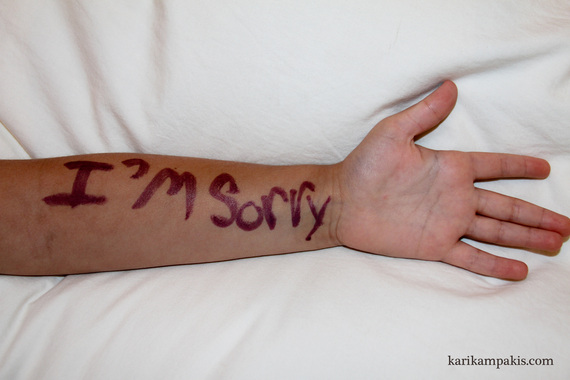 When we were finished, my daughter told me that she'd cried in bed for an hour before getting me because she felt so guilty. Again, I hugged her and told her it was OK because I knew she wouldn't do it again.

"Did you have a feeling it was wrong beforehand?" I asked.

"You need to listen to that feeling," I told her. "It's there for a reason."

The next morning, her sisters accepted their apologies and laughed about the incident. To them, this was a funny memory. To me, it was an opportunity to show my child grace when self-torment was getting the best of her.

I often tell my kids they can come to me with anything. I tell them they'll get in more trouble lying than if they come clean. But waking me up in the middle of the night to admit a mistake was a first. My daughter had no idea how I'd react -- nor did I.

After confirming everyone was OK that night in the dark, I considered a quick lecture. I knew I had my daughter's ear, and that anything I said would be remembered a long time.

But in my daughter's trembling form, I saw two things: myself and the future. I saw myself because I beat myself up over mistakes. I know how painful these beatings can be, and how nine times out of 10, external punishment isn't necessary.

I saw the future because I knew I was setting a precedent. Whether I reacted with anger or took a moment to calmly listen might make a difference in whether my daughter ever wakes me up again with a confession.

Even in my groggy state, I could imagine her as a teenager, creeping into my bedroom with a heavier issue she's desperate to unload.

I want her to come to me. I want all my kids to, and though I won't always help clean up their messes, let them off the hook, or forgo punishment, I will help them think through a situation to decide on the best course of action. Yes, it's disappointing to see our child slip when they know better, but that's part of parenting. Our children are going to make mistakes; whether or not we're part of the solution depends on the relationships we build today.

Good things came from this incident, as I told my daughter the next day. One, I learned that her moral compass works. She's gaining the ability to self-monitor and doesn't need me hovering to point out every single right from wrong. Two, she knows the sting of guilt and regret, which may enable a better choice next time. Three, I got a chance to earn her trust. I got to prove that even mommas who fly off the handle sometimes can be allies when needed.

I felt closer to my daughter after that incident. I respect her for owning up to a poor choice and believe her coming to me was a sign of maturity. I say I earned her trust, but maybe the bigger truth is, she earned mine. Knowing her conscience is in working order relieves me; it makes me a little less anxious about the independence-seeking years ahead, when the company of friends slowly replaces me.

I can't always stop my daughter's foolish behavior, but I can be an oasis when she's ready to right her wrong. I can offer words of encouragement when self-torment kicks in. Most of all, I can remind her that a mother's love never sleeps. Day or night, my door is open, and should she ever need help, she knows exactly where to find me.

This post originally appeared on karikampakis.com. Find Kari on Facebook or check out her upcoming book, 10 Ultimate Truths Girls Should Know, to be released by Thomas Nelson in November 2014.

Love in One Photo
More:
Mistakesgracemoral compassParenting Parents
Newsletter Sign Up
Raise the kind of person you'd like to know
Subscribe to our parenting newsletter.
Successfully Subscribed!
Realness delivered to your inbox