A month into her first 'real' job.

Goes to the doctor and finds out she has MS.

Fast-forward three years later. She's being honored by the California MS Society because of something truly extraordinary.
. 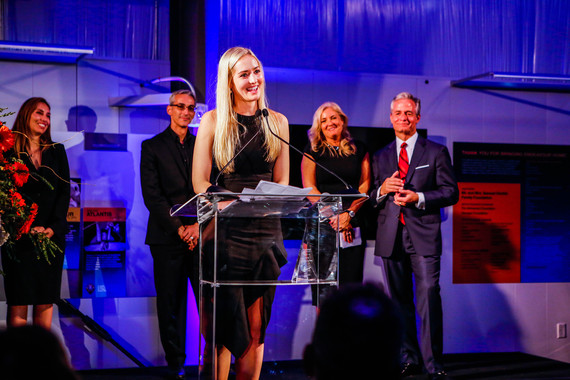 It's because of what she does every single morning in that moment before she gets out of bed.

The coal that she throws in her stove every morning is her mother's love. Her father's respect. Her friend's confidence.

That's why she was honored by a room of over 850 guests -- mostly twice her age.

It takes all of about 5 seconds to look in the eyes of Christina -- and you're taken away. To a sensitive place where she lives. To where grace lives.

Yet behind those eyes, Christina carries a memory of something you don't wish for any sibling. For anybody at any age -- but surely not an 11-year-old.

It took her a childhood to sort out that moment, and Christina had barely cracked open the door to the next chapter of a career and adulthood -- when she got the news about MS.

Below is a video of what Christina said to 850 people that came to this MS event.

Most 25-year-olds I know (most anybody, at any age) would have said something predictable thanking everybody for the new glass trophy they're putting on their mantle.

She spoke from another place. A real place. She gave up a part of herself that night.

Here she was a 25-year-old on a small stage in an enormous space literally under a spaceship that had journeyed across the solar system -- speaking to a massive crowd of the biggest movers and shakers in all of Southern California.

And she had them in a whisper.

She spoke not just to them; but to anyone, of any age, that knew the pain of uncertainty.

I hope you share Christina's video with any young person living with MS or any other hardship.

With anyone that lives with the pain of uncertainty.

(Check out www.nationalmssociety.org/2016ladinner for more videos from the night...)
.