Tyshawn Lee's funeral was this past Tuesday. He was nine years old, and gunned down on the Southside of Chicago on November 2, execution-style, allegedly by his father's rival gang. Depending on your news source, some say his death was not random, but he was lured into the alley as retaliation for the "sins of the father."

Others have said it wasn't a rival gang but the same gang -- which, let's not get into it here -- but it happens a lot. (To their credit, the founding members of both the Gangster Disciples and the Black P Stone Nation -- now in prison -- have vocally condemned this tragedy). Or some that maybe Tyshawn was a gang member himself, operating as a lookout, and died in the line of duty. Is nine too young? Not in Chicago.

The latest rumor: his mother, who crowdsourced Tyshawn's funeral, is being accused by some of actually using the money to buy a new Chrysler 200. In darker portions of the web you'll hear the word "set-up." I can't even take my mind to that place. 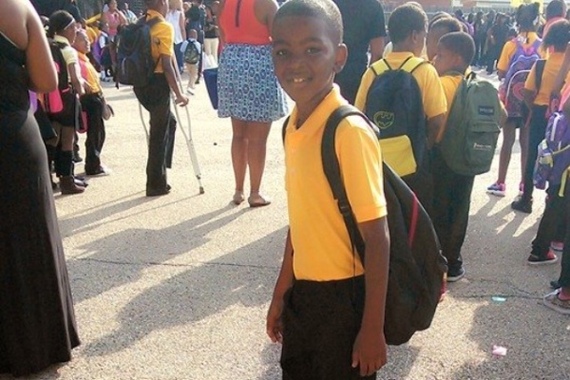 Poor kid. You read that and look at his picture and are thinking exactly what I'm thinking: what a mess. No arrests. A reward that has now gone up to $50,000, and no one, father included, that will cooperate with the police. This is going to end how the rest of the murders in this city do -- with more people dying.

It didn't used to be that way. In a mess like this you used to be able to call a pastor, who could then call the two local gang leaders ("chiefs"), bring them together, and organize a truce. The pastor could do this because the church was intimately woven into the fabric of a community. (anecdotally: the church where I pastor -- in Chicago -- once had a gun safe in the pastor's office, because the Black Stones used to throw parties there). The church could get gangs to organize peacefully, to advocate for jobs, and vice versa. It used to be that a church gave off the radiance of the sacred, so that even the blocks around the church were safe space, the church itself a sanctuary.

And now? Families only call the church for the funeral.

This is an absolute mess of cultural and systemic proportions -- a mess churches and gangs used to be able to work together and prevent. Now, an institution that used to sit as a community's anchor is part of the cleanup crew.

Tyshawn was killed just a few blocks from the Faith Community of St. Sabina, pastored by Father Michael Pfleger. The funeral was also held there, and to his credit, Pfleger has been a voice of support for the family and community. For all of St. Sabina's presence now though, ask yourself: In what part of the process did the Church take over? The end. Cleanup.

By no means is that meant to disrespect: care for the grieving and speaking a word of peace in a tense and violent city is what Church is supposed to do. We're equipped to provide triage and ointment in bruised and broken situations. I'm not disappointed that we are invited to cleanup; I'm lamenting that we're not invited to prevent. In many ways, our communities, our cities, and our nation doesn't view pastors as partners; we are janitors. When everyone else is done with it, we get to pick it up.

This past summer, the family of slain-Chicago-rapper "Capo" called me to preside over the funeral and burial. The seduction to hubris -- I mean, of all the other pastors they could have called, they chose me -- should instead become a question: "Why, of all the pastors in your community, are you calling me?" I'm honored, of course, but that family would have to pass 250 churches to get to mine. I'm not happy for myself: I'm sad for what "church" has become to so many people. Humility comes quick when you realize how much people are NOT calling you.

Move away from Chicago and into your own community for a second: are the majority of the calls for a pastor to help build, or to help fix? Are you showing up for community planning meetings, or presiding only at vigils? (Let's be honest: Are we even getting the calls for the vigils?) Where do you think the church's presence is most important -- beginnings, durings, or funerals?

(Some of you bright bulbs know the answer is "all of the above.")

Churches, especially in areas that show signs of urban decay, are quick to point out the decay. But sermons-turned-tirades about what's going on around the corner illustrate the concern perfectly: we have much to say AFTER, and have lost our voice DURING.

When I was a kid, you only called the janitor when someone threw up and nobody wanted to touch it. Takes courage to be a janitor. Takes a nose for crap. But be clear: the janitor was not part of the normal functioning of the school. Like, if everything goes according to plan, Groundskeeper Willie never gets a call. What happens during tragedy should not be our concern: we should be at the table when the community is being formed. The absence of religious institutions at any table of ongoing civic engagement should be perceived as a missed opportunity. Pastors should ask themselves where they are, where they aren't, and why our presence appears to be totally superfluous... until society vomits. I want to be there when its stomach is rumbling. No: I want to feed.

There will be shootings, and strikes, and arrests to be made...

... and there will be strategy meetings, and interest groups, and public forums.

Strive to be at both.

In Chicago, there are many pastors that want to help "clean up the violence problem." I'm pretty sure this isn't what we mean.

Be a janitor AND a principal.