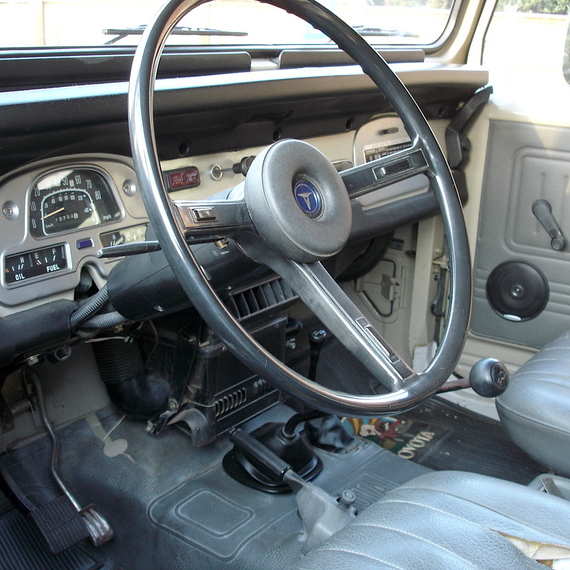 One time, I needed a ride home, 150 miles away. And one of my friends, who was moving some things in his old car, offered to give me a ride. When he picked me up, the backseat was already filled with household items, including a canary in a birdcage. And I just managed to squeeze in.

Midway through the trip, the muffler fell off. My friend stopped the car, collected the muffler from the middle of the highway, and began to think of how to makeshift a repair.

He took a screwdriver and hammered two holes in the floor behind the driver's seat, poked a wire coat hanger through one hole, caught the muffler in the u-shape, brought the coat hanger back up through the second hole, and twisted the two ends together, holding the muffler to the bottom of the car.

He thought it was fabulous -- but I protested! What if deadly fumes entered the car through the holes? Since I was the only one in the backseat, I was sure I'd be the first to go.

My friend laughed and then assured me that the bird would go first. So I rode the rest of the trip with my eyes on the canary.

People are always going to surprise us with unexpected behavior. And some of it we'll like, and some of it we won't. We might even believe they're wrong. My friend's solution was super creative, but I also thought he could've (should've) fixed his car ahead of time.

Here are some things to consider when people do things that we don't like:

1. Sometimes, we just want to feel right about others being wrong.

2. Even if every negative thing we believe about a person is true - which it never is - it's still never appropriate to dump our stuff on them.

4. When we stay supportive of people no matter what, their dignity stays intact. And that's something we all deserve in every moment.

We tend to think that force equals strength, and that our best response is to push against people and conditions that we don't like. But then we miss out on using the power we all have to make life better for others and ourselves.

It's not weak to be bigger than whatever's happening, and to support people in spite of reasons to not. It's actually pretty heroic.

We're in charge of our emotions - no one else is. And we can decide whether to hang on to unpleasant feelings. If not, we can just stop giving them attention and meaning, and instead focus on what makes us feel good.

I could've fussed at my friend while I was cramped in the backseat with the bird and the fumes. A better choice though is to keep relating well to people while they're in the middle of problems, and to appreciate their efforts.

And today, my friend is still one of the dearest and coolest people I know.

For more posts by Grace, visit her blog at gracederond.com. This article was originally featured on The Good Men Project.

More:
healthy livingRelationships communicationkindness
Newsletter Sign Up
The essential guide to taking care of your mind and body
Subscribe to HuffPost’s wellness email
Successfully Subscribed!
Wellness delivered to your inbox