The GOP's incessant jabs at Muslims, representing a keystone campaign strategy, really shows that they have nothing else of substance to submit to the American people. They want to make America the exclusive country club of the elite -- as if it is not filled to the brim with 99% of diverse citizens who make up the fabric of this nation. The scary part is seeing those in the 99% that fall for the hateful rhetoric as if there is something in it for them. There is nothing in xenophobia and islamophobia for you, but an unstable, unsafe country and a divisive environment in which to raise your kids.

President Obama "told it like it is" in his final State of the Union address on January 12 when he addressed the matter head on. 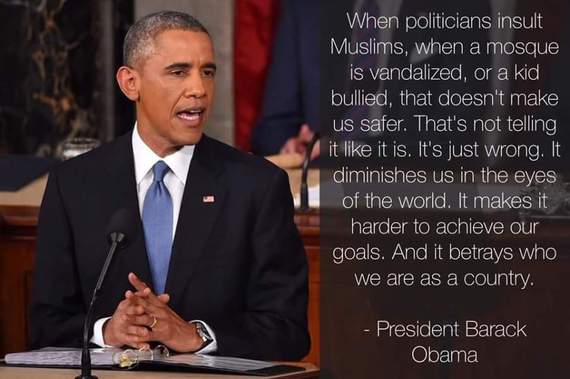 When he said, "When politicians Insult Muslims, when a mosque is vandalized, or a kid is bullied..." I stopped listening. I felt an emotion deep inside my gut that I can't even describe. Outwardly I felt nauseous. Inwardly, I felt a combination of disgust and embarrassment. In 2016, the President of the United States needs to school people that it's not okay to insult people who don't follow the same religion as you; that it's not okay to vandalize places of worship on U.S. soil; that it's not okay to bully kids.

Those precious moments in the State of the Union when we can be reflecting on innovation, education, healthcare -- we can't. President Obama had to stop and remind everyone that throwing fire bombs into mosques is not okay. This is the America we live in right now.

Since the increase of hateful, Islamophobic rhetoric taking over the airwaves, I've seen more of my family and friends in the Muslim community directly affected. My relative who wears hijab is frequently harassed in public. Doesn't matter that she was born here, has a college degree, maintains an amazing professional career, pays her taxes, is a model citizen and amazing mother raising future contributors to this nation. She wears hijab; therefore, the ignorant in society listening to the Islamophobic drumbeats of today sometimes react in very harassing and direct ways.

This is scary. This is terrorism. My relative should not have to be afraid walking into the grocery store looking visibly Muslim in her home country. Hate speech has these direct consequences. Another community member told me that their Muslim American friend was physically assaulted on the street for looking visibly Muslim. And he didn't report the incident. I encourage anyone attacked with hate speech or assaulted, to report it. Do not hide and hope this goes away.

President Obama Rejecting Islamophobia in His State of the Union Address

Telling the American public to not hate on Muslims was cringe-worthy to a number of GOP politicians as noted by their tweets and in some cases, facial expressions. 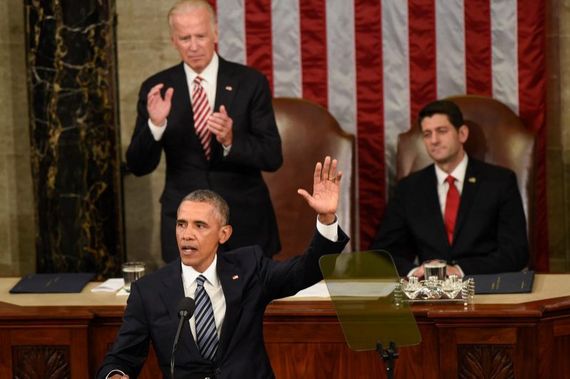 Thankfully, there are progressive individuals that applauded the President's State of the Union address. I for one am amazed at the amount of hatred the President himself has withstood his entire tenure. I will miss him as our leader.

I have faith in the American people that they will not elect a candidate that relies on fear and divisiveness to get into office. Muslim Americans are educated, professional, contributing members of American society. You don't have to love us- but the hate speech and minute-to-minute attack on our community has to stop. Enough is enough.