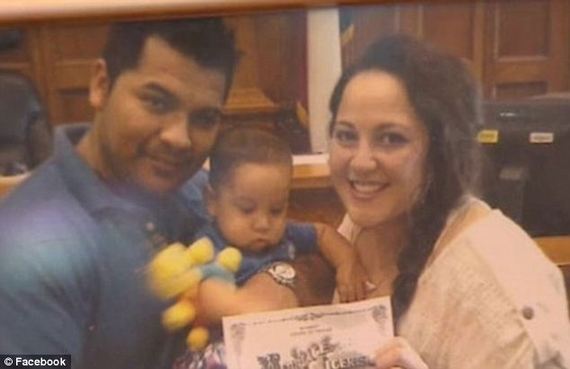 Erick and Marlise Munoz were both paramedics. They were both around life-and-death situations on a daily basis. After Marlise went through her brother's tragic death, she told Erick that if anything ever happened to her, she didn't want a machine to keep her body alive. Sure enough, the unimaginable happened. Marlise had a pulmonary embolism that left her brain-dead on November 26th. She was also pregnant. Erick wants to let nature take it course, but Texas has a law that pregnant women have to be kept on life support if there's any chance their fetus might survive. This is a case where the pro-life movement has literally gone Frankenstein.

Indeed, Rachel Cox at LifeNews berates Erick for wanting to honor his wife's wishes about her end-of-life care:

Why is this father trying to find all the reasons why his wife and unborn child should be removed from life support and left to die, and not the reasons why they shouldn't? I find it very frustrating and disheartening that Erick Munoz thinks this way and also frightening that so many people actually agree with him. I believe these hopeless, negative attitudes about the Munoz family's situation are caused mainly by one thing: abortion. Abortion causes society to devalue human beings. When the abortion industry, media, and politicians pound in our heads over and over that unborn babies are blobs of disposable tissue, it's easier to see why someone would not be motivated to preserve the life of their "clump of cells."

Of course. It's all abortion's fault. That's why Erick and his wife's parents, all of whom want to end life support, are seeking closure and the ability to grieve their loss. Because the abortion industry has corrupted their minds. That's why Erick doesn't want a brain-dead body that is only a shell of a person to be artificially respirated as a super-expensive, organic fetus incubator. Elizabeth Landau writes that using the terms "brain-dead" and "life support" is a big part of the problem. When the brain no longer functions, a person is not just "brain-dead"; they are all the way dead. "Life support" is a misnomer in such cases because what's happening with the person's body is not life, but just a sort of zombie un-death, no different than if a mad scientist figured out how to create an organ plantation in which livers and kidneys and stomachs and hearts could be harvested from recently dead people and incubated outside of human bodies to be transplanted in the future (hey, it might not be a bad idea, but it isn't human life).

A truly Christian pro-life position is concerned with not letting people play God by ending unborn children's lives unnaturally with technology. The pro-life position becomes Frankenstein when it demands that technology be used to disallow nature from taking its course with human life. According to NIH data, God is the ultimate abortionist, terminating about half of all fertilized eggs, and about 15-20 percent of the fetuses of known pregnancies. If it became technologically possible to extract brand-new zygotes from the uterus and grow them in fail-proof incubators in which God would not be allowed to play God with human life so that the gestation rate would be absolutely 100 percent, would the pro-life movement call for that too?

According to an article in the American Thoracic Society Journal from 2002, end-of-life critical care (i.e. trying to extend the life of someone who is imminently dying) is the greatest contributor to our skyrocketing health care costs. A study done in the '70s and '80s showed that 77 percent of the medical costs for Medicare patients happened in the six months of their lives. I imagine that the technological advances over the last 30 years have pushed that percentage even higher. One way of dealing with these costs is to provide counseling resources for patients and families to have the difficult conversation about what to do when patients are unable to live without life support, in other words what Sarah Palin calls "death panels."

The Texas law on advance directives and end of life care is chapter 166 of its health and safety code. The provision for pregnant patients is section 166.049: "A person may not withdraw or withhold life-sustaining treatment under this subchapter from a pregnant patient." Nothing in chapter 166 provides for the state of Texas to pick up the bill when it requires the family of a pregnant patient to keep her alive until the fetus can be delivered. It costs about $4000 to run life support machines for one person each day plus a ton of other hospital fees. If the severely brain-damaged fetus is carried to term, there's no telling what the cost will be to keep it alive (of course I imagine that once the fetus is delivered, the state of Texas no longer cares what happens to it since the "life" that it champions is pre-birth and post-death).

So Texas is the worst kind of nanny state, telling people that they have to do something prohibitively expensive and unspeakably emotionally cruel at their cost. It's time for pro-life Christians to call up Rick Perry and tell him to let God be God when it comes to human life. Where are you, Tony Perkins? James Dobson? Russell Moore?