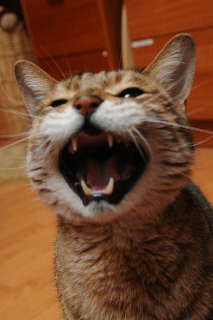 A reader of one of my pet columns recently asked me about the stray cat she had taken in. "She's very affectionate," she stated, "however occasionally while petting her she bites and scratches. How do I stop this behavior?"

My answer? "Have you heard the joke about the patient who visits the doctor? The patient comes in and asks, 'Hey Doc. My arm hurts when I lift it like this. What should I do?' The doctor replies, 'Don't do that.'

So what's the deal? You'd think that if you feed your cat and give her a good home the least she could do is let you pet her at will. But just like people, cats can only take so much. They might like the petting at first. But when enough is enough, they'll let you know. The tail will twitch, the ears will flatten, and the skin may develop a nervous tick. At this point they're practically screaming in plain English. Stop! I can't take anymore! If you continue, they'll give you a sign you can't miss. A bite meant to hinder not to harm. If they've been punished for this behavior in the past, they'll even dart off your lap to avoid the retribution that may follow.

Now why cats don't just leave when they're fed up I don't know. Because it really depends on the cat and the situation. Could be that your cat wants you to pet her but you're just not doing it quite right. In social grooming cats groom each other in short bouts, and much of the grooming is focused on the neck and head. So maybe Kitty wants you to pet but only in spurts or scratch around the ears instead of petting excitedly or in long strokes. Or maybe petting is good but only in certain places. Cats definitely have areas they tend to consider taboo. For instance, touch Kitty on the belly and she may tell you that area's off limits.

What if your cat has a low tolerance and you want to interact more? You can teach Kitty that petting is fun -- it's paired with yummy treats. Pet Kitty and give her a treat before she starts getting upset. Better yet, at first only pet her while she's eating canned food or treats you're giving her, pet her for short bouts, and then stop all petting and remove the food simultaneously. Then repeat the these steps multiple times until she understands that petting equals yummy food and the yummy food stops when petting stops. If she really hates the petting or has a long history of being bugged by you, you'll have to practice a lot before she decides she always enjoys the petting. But once she gets the idea you can back off on the treats. The main message is to always stop before you have a chance to irk her and soon you'll have a Kitty that allows at least short bouts of petting instead of one that suddenly bites.

This article was revised for the Huffington Post. To view the origonal article and others from Dr. Sophia Yin, please visit drsophiayin.com.