By Suchitra Vijayan and Michael Brooks* 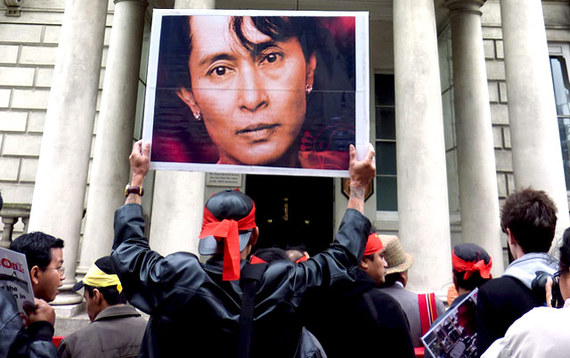 "It is no sign of benediction to have been obsessed with the lives of saints, for it is an obsession intertwined with a taste for maladies and hunger for depravities. One only troubles oneself with saints because one has been disappointed by the paradoxes of earthly life; one therefore searches out other paradoxes, more outlandish in guise, redolent of unknown truths, unknown perfumes..." ― Emil Cioran

In the past week, we have seen an explosion of stories critiquing the Burmese opposition leader and Nobel laureate Aung San Suu Kyi. One article's particularly hyperbolic headline even asked if she was going to be Burma's "next tyrant?" Suu Kyi has provoked international outrage and confusion as a result of her response to recent mass killings of Muslims by Buddhist mobs.

Questioned by the BBC Suu Kyi said of the killings:

"This problem arose last year and this is to do with fear on both sides,"The fear is not just on the side of the Muslims but also on the side of the Buddhists as well. Muslims have been targeted but also Buddhists have been subjected to violence ... Global Muslim power is very great and certainly, that is a perception in many parts of the world and in our country as well."

Suu Kyi's comments are indeed problematic. Among the most discriminated against populations in Myanmar is the Muslim community in northern Rakhine State, the Rohingya. Most are denied citizenship, and face severe restrictions on freedom of movement as well as numerous abusive policies. The 2012 clashes between Buddhists and Muslims in Rakhine State that left 200 people dead and around 140,000 displaced, the great majority of them Muslims. Earlier this year, the violence spread to central Myanmar. The worst incident occurred in the town of Meiktila. The brutal killing of a Buddhist monk sharply escalated the situation, with two days of riots by a 1,000-strong mob resulting in widespread destruction of Muslim neighbourhoods, and leaving at least 44 people dead, including twenty students and several teachers massacred at an Islamic school.

While Suu Kyi's comments did not condone violence she did resort to false equivalency and conspiratorial allusions to "global muslim power." Suu Kyi's statements may be surprising coming from a nobel prize winning "political saint" but they are perhaps not as surprising coming from Suu Kyi in her current role as opposition leader in a still substantially limited democracy. Seeing it in that light does not excuse Suu Kyi but it does remind us of vital context often missing from our conversations involving "political saints." Too often in our focus on whether figures like Suu Kyi are living up to our need for moral heroes, we miss the social, economic, religious, political and military drivers that shape times of political transition such as the one currently taking place in Burma.

The International Crisis Group has been closely monitoring the "dark side" of the transition in Burma. A report also states that "frustration and anger built up under years of authoritarianism..." is feeding an emergent "Burman-Buddhist nationalism" that preaches religious and ethnic intolerance and has called for boycotts of Muslim owned businesses. The Crisis Group study notes the distinct danger posed by the fusion of political rage and religious authority.

Jack Snyder and Edward Mansfield, in "Electing to Fight: Why Emerging Democracies Go to War", discuss incomplete democratisation. Stating, "In a state with weak institutions and heterogeneous political constituencies undergoing an incomplete democratic transition, new entrants into politics used nationalist doctrines of popular self-rule as a battering ram to gain access to political power. Established elites responded with nationalist outbidding in an attempt to legitimate their waning power." The ​process of incomplete democratization in countries like Burma creates political competition and requires ​politicians to appeal to large constituencies if they hope to acquire or maintain political power. Suu Kyi, is no longer a saint in exile, she is the opposition politician and chairperson of the National League for Democracy (NLD) in Burma. Her current role reduces the extent of political experimentation.

Samuel Huntington in a 1965 paper on Political Development and Political decay, states, "National distingeration is a phenomenon as much as national integration", Sometimes political decay is encouraged in the name of political development. These developments have regional implications as seen in the recent terrorist attacks targeting a Buddhist religious sites in Bodhgaya. What's happening inside Burma is no longer a matter of domestic policy but instead has serious regional implications. Burma's transition is also bleeding instability into Thailand, India and wider South Asia.

We are doing great disservice by prioritizing the person over, working to address complex challenges of national transition, institution building and mobilizing civil society for genuine democratic participation. This is not a defense of Suu Kyi's comments but a call to truly address the underlying dynamics leading to Burma's present crisis. We can't outsource a Human Rights policy to one person's conscience.

Our inherent consumerism prefers narratives that create, icons and idols. It is easier to grant sainthood or crucify, it is harder to engage in substantive conversations. Burma's current Human Right crisis, ethnic peace making and democratic opportunities, lie beyond the opposition leaders maneuvering. May be it is also opportunistic, because an article calling her a tyrant will get more eyeballs, than a piece that talks about the structural transformation, fraught with complex violence in Burma.

*Michael Brooks is a New York-based policy analyst & commentator. He is the host of INTERSECTION on Aslan Media and Contributer & Producer for the award winning political radio show The Majority Report. His writing has been published in the Washington Post, Huffington Post, Alternet and Al Jazeera America and he appears regularly as a guest analyst on television and radio including Al Jazeera America and Huffington Post Live. Before that he co-wrote The Buddha's Playbook and designed training programs integrating mindfulness meditation and choice design theory. Michael has also worked as a social movement researcher and community building strategist at the open source consultancy Civic Actions. He holds a BA in political science from Bates College and studied Turkish and EU relations at Middle East Technical University in Ankara Turkey.