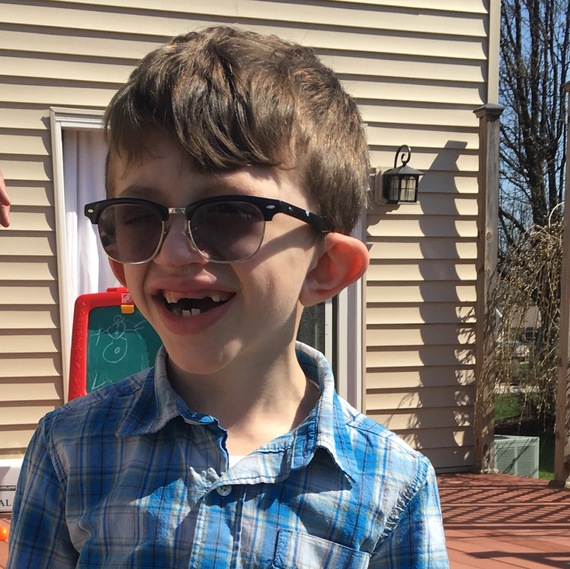 He's seven years old. And he has Noonan Syndrome.

Noonan Syndrome is genetic disorder caused by one of several genetic mutations. Donovan's is of the PTPN11 gene. It is a multi-system disorder with an estimated prevalence of 1 in 1,000 - 2,500 births. In Donovan's case, he has a bleeding (platelet function) disorder, a congenital heart defect (pulmonary valve stenosis), feeding and gastrointestinal issues (Celiac disease), ptosis of his right eye, small stature (for which he takes daily injections of growth hormones), and low-set ears.

By all accounts, he's a pretty confident kid. He's smart, funny, comfortable in groups of all ages, and overly sweet and affectionate.

And, while he's conscious of his differences, he's never let them get him down. He embraces his daily growth-hormone injections because he knows they are helping him grow. He loves his glasses because everyone tells him how cool they look. He's always quick with a Donovan-ism to break up a room. And he doesn't mind his current toothless state, because missing teeth bring the Tooth Fairy, who brings money and future video-game purchases.

That is, he never let them get him down until last week.

At school, a 4th grader made fun of his ears. And it really bothered him. It's the first time I've seen him down in the dumps about who he is, or, more accurately, what it is about his Syndrome that sets him apart.

As a parent, I had three reactions. In order:

Today's schoolyard bully is tomorrow's workplace bully. The question, however, is whether Generation Z (and whatever the generation after that will be called) is prepared to handle that bully. My fear is that we are raising a generation that is so prepared in relying on their parents that they will run to HR the first time someone offends their sense of anything at work.

Employees, your employer is not your parent. Employees need to take responsibility for their own problems, and not burden HR with every petty workplace slight and insult. An employer's job is not to adjust every petty grievance between employees. It's only when the self-help doesn't work, or when the offense is so bad that self-help is not possible, that an employee issue needs to become an employer issue.

I felt (and still feel) horrible that Donovan's feelings were hurt. It was his first experience in which someone treated him poorly because of his differences. And it won't be the last. The question for him is how he reacts when it happens again, and what these experiences teach him about how to react if it happens in the decades to come at work.