Grant me patience, Lord, but hurry. This "Mother's Prayer" was framed and hanging in my mom's kitchen, although patience was a quality she did not lack. A fun-loving former hippie, she navigated a chaotic household of four kids and a demanding menagerie of pets. She withstood hours, days, years without solitude. And nurtured a husband who, despite his brilliance and ambition, never learned how to work the washing machine or change a diaper.

I never remember her yelling at us. Maybe it was the occasional toke that calmed her down when we were little, as well as the relaxed parenting standards of the 1980s. At age 10, I was left in charge of my three younger siblings, and everyone survived intact.

Grant me patience, Lord, but hurry. I recited these words like a mantra on our recent snow day, the second school cancellation in a week. Blindsided by the blizzard, everyone trapped at home again, I steeled myself for the hours ahead. Trying to get any real work done would prove to be my undoing.

The morning began in relative harmony. I snuggled in bed with the girls and played the fox and bunny finger games they love. Did two loads of laundry, made breakfast, cleaned the kitchen, vacuumed the downstairs. Answered some email and orchestrated an art project. Discovered that our snow shovel had been left outside and plowed into a huge snow mountain, and things went downhill fast. 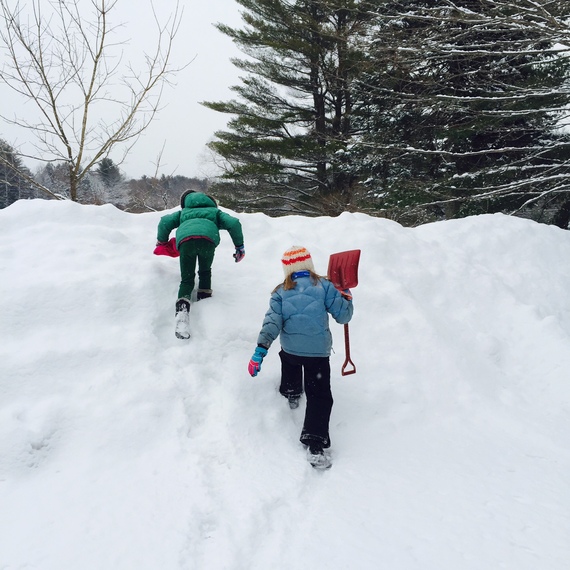 Forget patience. Keep your expectations low would be a better mantra. I ordered the kids out to dig for the buried shovel. Like little prairie dogs in balaclavas, they pawed through the huge drifts while I stalked around in my moon boots, jabbing the rake into the snow pile and barking about responsibility. You could blame my maternal rage on hormones or the full moon, but it bubbled up from an irrational sense of unfairness at the snow day ousting my best-laid plans.

Eventually, we gave up and retreated to the kitchen for nachos. I told the kids to give me space so I could work, and C. took this as carte blanche to make an elaborate sheet fort using every item in her closet. The project occupied her for 20 minutes and then she was rummaging in her sister's bedroom. I could hear the screams from my study. Soon, I had a visitor.

The concept of space is theoretical when a mother is present. If we're all trapped in the house together, the kids are inexorably drawn to me like filings to a giant magnet. But the kind of concentration I crave requires silence and solitude. Maybe I could lock myself in a room with a white-noise machine and earplugs -- but not even then would I fully drop in.

I once read an interview with a prizewinning young poet, age 28, who complained that she couldn't work when her husband walked too loudly around their apartment. Just you wait, honey, I thought.

But playwright Sarah Ruhl has come to accept interruptions as part of her writing process. In her remarkable book, 100 Essays I Don't Have Time to Write, Ruhl describes her life as a mother of three:

There were times when it felt as though my children were annihilating me (truly you have not lived until you have changed one baby's diaper while another baby quietly vomits on your shin), and finally I came to the thought, All right, then, annihilate me; that other self was a fiction anyhow. And then I could breathe. I could investigate the pauses.

Ruhl is a brilliant writer and a more generous, patient mother than I am, and she has birthed twins. I suspect she may also have a nanny, but no matter what, she's found the right word. Annihilated. That's what the snow day did to me. I should have surrendered and put on Madagascar 3.

But for some reason I decided to drag the kids out on a mission. We had four-wheel drive. We could go get their hair cut! C's bangs had been shaggy for months, but I'd been too busy to fit in an extra errand. It was 11 degrees and dumping fresh powder. I told the girls to get their winter stuff on while I dug out the car.

A few minutes later, C. shuffled grouchily through the snow in a lightweight fleece and untied high-top sneakers. No gloves.

"NO," I said stonily. Her blatant defiance of the blizzard infuriated me more than any other little rebellion.

"You can't wear that," I told her. "Go back in the house and get your parka and boots." Did she not know a hot river of rage was simmering beneath my calm façade? I had my period. I had no self-awareness. succumbed, almost with pleasure, to the power struggle.

She wrinkled her nose and made a face at me, then began to open the car door.

My voice exploded in furious threat-mode: "Listen to me! You can't come unless you get your winter stuff on! Otherwise you will sit in the car while your sister has her hair cut!"

"Do you want me to start screaming?" I growled.

I bent down so as to get close to her rude little face. This was not a Choose Your Battles moment. I was at the mercy of a force greater than myself. The scream that emerged was unearthly, freed from the throat of a creature who was only part-human. I morphed into a hydra monster, a raging Medusa with snake hair hissing in the blizzard.

Both girls sat stunned in the car while I peeled out into deep snow. I had scared them into silence. I had scared myself. We rode the entire white-out trip to town in blissful quiet. I know the parenting experts classify yelling as an ineffective discipline strategy, a breakdown that serves neither parent nor child. According to family psychologist John Rosemund, author of The Well-Behaved Child:

I wish could be a calm, steady power source, holding up the beacon of my loving authority like the Statue of Liberty. If I could have kept my temper in the snow, my daughter and I might have done some problem-solving together, worked towards a new method of communication. But I'm not a chronic screamer. And sometimes the occasional, well-placed Medusa yell serves a purpose. After haircuts and bagels, both children thanked me profusely. I apologized for shrieking, and we talked about the power of anger. Then, with desperate gratitude, I handed them off to their father. 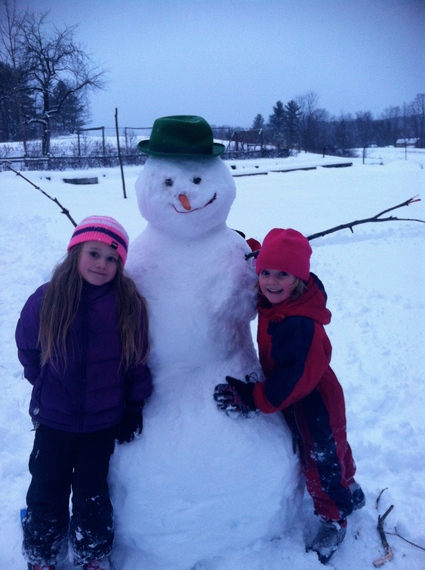