Can religion be a bigger turn on to consumers than sex?

Companies that are open about the importance of Christian and Jewish values in their corporate culture and mission have significantly more appeal to highly religious consumers who share that faith, a new study indicates.

However, companies that show some signs of wanting to appeal to religious consumers, but are not perceived as sincere in those efforts may alienate consumers who consider religion to be important in all aspects of their lives, researchers found.

So businesses such as In-N-Out Burger and the clothing retailer Forever 21, which place Bible verses in inconspicuous places on their products, may want to consider being more open about their religious motivations to maximize their appeal to consumers who share their beliefs, the study authors noted in the Journal of Marketing Theory and Practice. 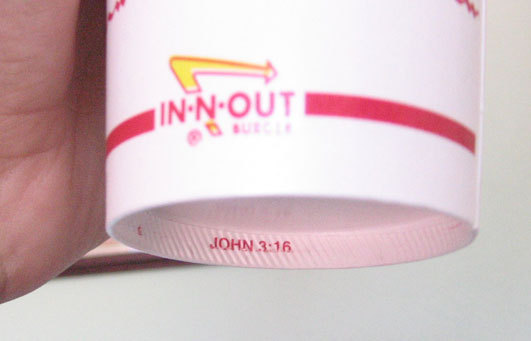 Compare those findings with one of a separate study that found the effectiveness of sexual images in advertising depends on the eye - and the personal faith - of the beholder.

A person with little or no ties to religion is more likely to buy a product if the ad portrays a woman in a negligee enticing her man to spend money on redecorating the bedroom.

That same consumer is more like to lose interest if the ad features a smiling model more modestly dressed endorsing a product in a respectful appeal to the woman buyer, researchers from the State University of New York at Albany and the University of Texas at Tyler found in a study involving 216 young adults ages 19 to 32.

The studies are part of a new wave of research on religious consumers that is revealing both what is more likely to make a sale with religious buyers, and how believers are putting their faith into practice when they shop online or at the mall.

The payoff: Religious commitment matters to the bottom line.

Religious consumers can be selective in what tenets of their faith cross over to how they allocate their income.

People who give greater percentages of their income to religion did not differ from others in areas such as alimony payments, credit-card debt and jewelry purchases, according to one study analyzing data from the Consumer Expenditure Survey.

However, the study also found that many consumer choices made by religious givers "are consistent with Judeo-Christian or biblical principles."

So, for example, religious givers seemed to take to heart the scriptural idea of the body as a temple, spending less than others on alcohol and tobacco, and more on health care.

They also were less likely to succumb to the McMansion temptation, spending moderately on housing while placing a premium on protecting their families by spending more on insurance, the study authors noted in the Interdisciplinary Journal of Research on Religion.

Religion, like political affiliation, can be a tricky demographic for companies to navigate.

Appeal too directly to a particular religious group, and you run the risk of alienating those with different beliefs. Offend a large group of believers, and a company may face similar consequences to its bottom line.

It becomes even murkier when companies are associated with a controversial public policy issue that causes division within both the public and religious communities. Just ask Chick-fil-A.

But there are also economic incentives to taking the religious attitudes of different communities into consideration.

The study on consumer responses to the religious ties of retailers suggests companies like In-N-Out Burger and Forever 21 may be leaving some profits on the table by not being more open about their commitment to religious values.

Compare, for example, a firm like Hobby Lobby, which proclaims its commitment to "Honor the Lord" and closes its stores on Sunday.

Brand loyalty is another apparent trait of highly religious consumers.

Shoppers in the U.S. and South Korea who said their religious beliefs were very important were less likely to switch brands or stores than consumers with low levels of religiosity, according to a study reported in the Journal of International Consumer Marketing.

So what does this all mean for businesses?

Be sensitive to local markets with targeted campaigns, some scholars advise.

What sells in Beverly Hills may not go over so well in Manhattan, Kansas.

Running national campaigns that do not take into account regional attitudes regarding religion "may result in consumer disenchantment, weaker connections, reduced loyalty, lower sales and profits, and long-term damage to brand equity due to negative public perceptions and consumer-led boycotts of the firm's offerings," the study on responses to sexual appeals indicated.

And the lesson for religious groups and individuals: Mammon is not all-powerful.

From supporting fair trade practices to healthy lifestyles, research suggests a strong faith can have a significant effect on the marketplace.

Image By ParticleMan at English Wikipedia (Transferred from en.wikipedia to Commons.) [Public domain], via Wikimedia Commons