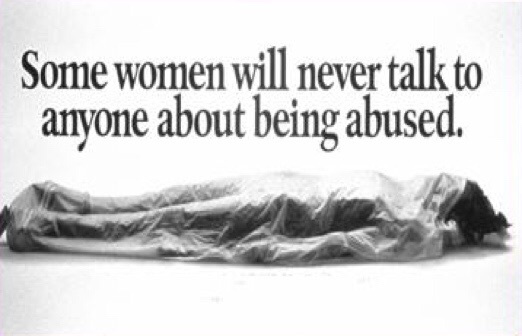 I will never forget the woman who came to me in the first year of my practice as a gynecologist, over 20 years ago, complaining of vague pelvic pain with her doting, loving husband accompanying her. She was mid 30's, a couple of kids, solidly middle-class, and had a partner "concerned" enough to accompany her to the visit. He was affectionate and so involved that he was able to complete her sentences and even reminded her of things that she had forgotten to tell me.

After the history, I proceeded to the physical exam where the patient's husband insisted on accompanying her so that he could hold her hand during the exam, a request to which she agreed with a taut smile and a glance away. How connected they are and what an attentive partner, I thought, totally clueless to what might have really been going on. Following a normal physical exam, I launched into my differential diagnosis of what the possible causes could be, asked her to keep a symptoms diary so that we might figure out what was going on, and asked her to return in a week so that we could reassess. They thanked me profusely, he more than she, and they departed but there was an ever so subtle difference in her eyes that I now wonder whether or not it was a cry for help.

After a couple of weeks, the patient never returned, and I didn't think anything of it until a couple years later when I had my consciousness raised around intimate partner violence (IPV), previously more common known as domestic violence (DV). I had temporarily left clinical practice in pursuit of a public health degree at Harvard and took a seminar on IPV, the first time I had a context for the nightmare of violence that 1 in 4 women in their lifetime will experience at the hands of their partners. At that point I had been involved in patient care over 7 years as a student, resident physician, and newly minted practitioner, and yet I had no awareness of this type of hell for women and what it looked like in general, let alone how it might present in the form of women coming to me for care. It was after I came to understand the dynamics of power and control in IPV, often subtle in nature at first then blatant and pervasive later while cleverly masked to the outside world, that I finally recognized how many women had likely presented to me previously who were probably battered and I had no clue.

The woman in particular who came to mind was the woman that I described earlier, who to this day I wonder if she is alive or not, and that troubles me. I marvel at how obvious the signs that she might have been a battered woman are to me now than they were 21 years ago. The sickeningly sweet partner who was overly protective, answering questions for her, and who would not allow her to be alone with me or staff, now feel like a presentation of IPV that was as subtle as a freight truck. Her Highness Maya Angelou once said, "When I knew better, I did better". On the issue of IPV, for me that means I have integrated into my clinical practice a vigilance and screening informed by the awareness that any person in a dating/partnering relationship is at risk and, as such, should be screened for that type of danger. It is important to do so in the health care setting because oftentimes the only time that a battered individual might be out of the control range of the perpetrator is when they access health care. A simple question about how things are in the relationship, especially at the beginning of new ones, might detect a woman in a volatile and dangerous situation. At any given point, the answer to that question will be yes in a clinical setting roughly 12 percent of the time, and for some that might seem like a low yield. However, I submit that any percent of women being battered at any time is too many, and the safety of as few as one woman secured makes the effort worthwhile, as screening everyone will mean that 100% of the time the message is given that IPV is not acceptable.

While I advocate for the detection of victims of IPV in health care settings, it is even more important that each of us in this society, as neighbors, friends, parents, and siblings, become aware of this atrocity in our midst, and pledge the abandonment of bystander status when it comes to stopping violence. Because these situations can be extremely dangerous, I am not suggesting that every woman attack a perpetrator with the heel of her shoe or that men rush up in a chivalrous intervention, but I am suggesting that we not merely turn away when a woman, or anyone for that matter, is being brutalized. The ubiquity of cell phones for a 911 call, a whistle ( a reason to have one on your keychain), a yell, or anything that you can do might be all that stands between life and death for that person. Personal violence is facilitated by community silence.

This is Domestic Violence Awareness month, but I am asking that each one of us shift to domestic violence awareness for life, every day. I make this appeal as a physician who has seen first hand the effects of battering on women's, bodies, minds, and hearts, their families, and on communities that are impacted when a woman is harmed. I make it as a man against violence who takes the dual responsibility of never being a perpetrator while holding other men in my sphere of influence accountable. Finally, I make this appeal as a person of faith, understanding that patriarchal enshrinement of male privilege by misapplication of religious texts and doctrines often imperils and entraps women and children victims of violence in the home by validating authoritarian rule. We all must step up. Domestic violence, IPV, is not a private matter. It is everybody's business.