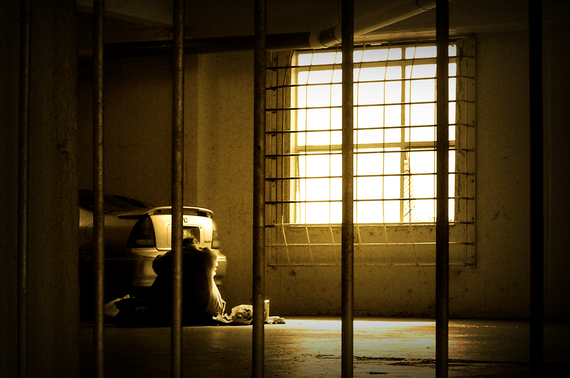 There should be more to being human than just being alive. There's a certain line beyond which humanity begins to diminish, and on which too many people titter every day.

On Tuesday The New York Times' Jennifer Schuessler wrote about Matthew Desmond's new ethnography, Evicted: Poverty and Profit in the American City. As a graduate student, Desmond observed and engaged renters in Milwaukee, as well as their landlords. The resulting document, focusing on eight families, narrates the personal dramas that unfold in one of contemporary capitalism's thickest shadows: the exploitation and dislocation of tenants. According to Schuessler, Evicted raises "a dark mirror of middle-class America's obsession with real-estate, laying bare the workings of the low end of the market, where evictions have become just another part of an often lucrative business model."

I wonder if I'll ever find the courage to read Desomond's work. I doubt it. The dread I feel at even glancing at the world of the evicted - the dishomed - is shrill and petrifying; like standing on a ledge, gazing down a deep chasm. It's too close. Like falling, it's too possible.

On the humiliation scale, it must be hard to compete with the ordeal of being unroofed, denuded of a place to belong to and deprived of amenities that by rights ought to be taken for granted. Yet people have the facility to survive, even through the most unthinkable indignity and most impossible scarcity. Whatever it is that constitutes humanity, it can yet, it seems, be infinitely reduced when survival is at stake.

But what if surviving isn't enough?

Schuessler concludes her review with a scene from Evicted that both she and Desmond found vexing. Larraine (a pseudonym) was 54 when she got evicted from her trailer house. Despite being chronically destitute - and to the chagrin of the young sociologist accompanying her - she decided to splurge a month's worth of food stamps on one, sumptuous lobster dinner.

Reckless, opprobrious, incriminating. Vintage Fox News fodder. Even if we look beyond the Republican paradigm of the poor as unrepentant, unreformable moochers, Larraine's decisive prodigality could still be due to nothing more than personal faults, like shortsightedness and immoderation.

But it could also be something else. Desmond admitted to Schuessler that Larraine's poverty is too deep for her to escape at this point, lobster or no. Between systemic failings and her own bad decisions, there's no way Larraine is getting into the race. There's no bright tomorrow to dream about, or big plan to work towards. Her world having narrowed to a single, nowhere-bound road, she may have recognized, at least on some level, that staying alive is pretty much all she has to hope for, and just how tragically insufficient that is.

Who knows why Larraine would squander her already-miserable allotment on a luxury meal. The only explanation Desmond was able to squeeze out of her is equally heart-rending and inscrutable: "Because I wanted to." Somewhere between yearning and despair, there must be an urge - a reflex - to feel human, to feel worthy. In a capitalist society this reflex is deleterious. In the Dichotomy of Trump, it's the stuff losers are made of. But maybe for Larraine it was dignity.

Larraine had a craving and she satisfied it. For a moment she dreamed above her station (I'm tempted to write "caste") and stole a bite of something from a different world. That fleeting dignity she had fashioned for herself must have tasted sweeter than anything she was entitled to, it must have made her feel more human than she was allowed to. For anyone on the edge of humanity, that must be worth a hell of a lot more than anything survival has to offer.