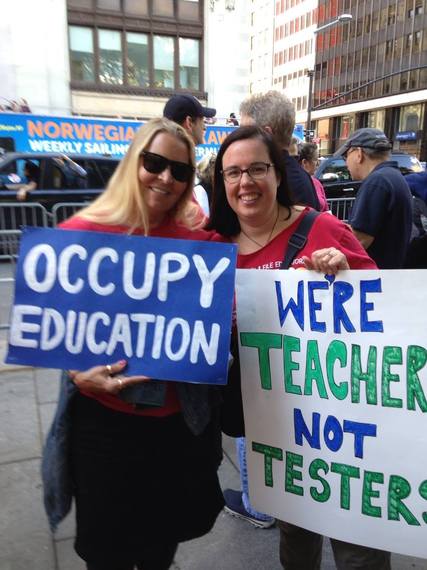 Feeling depressed, hopeless or worthless? Do you have low energy, and have you lost interest in activities you once enjoyed? Do you have problems sleeping, feel agitated, have difficulty concentrating? Has your appetite changed so your weight has, as well? Has it gotten so bad, in fact, that you have thoughts of death or suicide? Well, you may not, in fact, have Seasonal Affective Disorder (SAD), but merely be a public school teacher!

In these dark days of winter, it isn't unusual for many of us sunlight-starved to fall victim to SAD, the annual scourge of the Northern Hemisphere. But this year it's especially difficult for those of us in the battle to restore public education, braving the harsh assault of frigid temps and ice storms, blanketed in snow as well as massive blizzards of money, messaging, and disastrous public policy generated by accommodating pols. Teachers feel SAD, indeed.

The deform movement's secret weapon -- to overwhelm and demoralize us -- has already been used to advantage through directives which have de-professionalized teaching, inundating teachers with a storm of paperwork and data collection, while stripping them of the intrinsic creativity, passion and joy which called them to it in the first place. No teacher signed up to become an automaton, administering endless tests punctuated by the recitation of scripted lessons or at the very least, lessons written in lockstep with the latest destructive education policy decreed from the educator-lite bastions of power, from federal down to local.

Indeed, the new iteration of teacher -- Teachaton -- serves not the broad public interest of education as an individual and national good, but the selfish motives of the few: those who profit, the education business; and those bought by those profits, the politicians. One chases the money, while the other pursues the power. Meanwhile, who is focused on our students, and the nation's future? Certainly not Teachaton, who has been stripped of its true function, and since the inception of No Child Left Behind, has become increasingly defeated and apathetic with each new crushing directive. Now, in the face of anti-teacher initiatives ramped up to steroidal proportions, Teachaton is scrambling for basic survival.

New York Gov. Andrew Cuomo's recent assault -- conveniently after his re-election -- is just one of countless across the country. But shameless Cuomo has gone one step further, holding vital state school funding hostage to his demands: merit pay; evaluations based half on test scores; extension of probation prior to tenure; elimination of rights to due process; state receivership for "low performing" schools and abrogation of their staffs' union membership; and vast expansion of charter schools. In his blatant bid to strip teachers of their dignity, profession and union membership, Cuomo has proven an obsequious lackey to the corporate education interests who sponsored his fall victory: now not just Teachaton's autonomy has been compromised, but Teachaton's very mortgage is at risk.

Yet, here, in fact, is the proverbial light at the end of the SAD tunnel: Cuomo's attacks have galvanized teachers and their unions. Because as tolerable as apathetic Teachatons have found the last thirteen years of bashing policy to be, as deformers have gradually brought them to a boil, now they are being bashed where they live -- their families. Attack me: I complain. Attack my family: Bring it on!

The New York state and city teachers unions have stepped up, sponsoring community forums, organizing chapter sessions in schools, and getting the message out through social media and ad campaigns. But the deform juggernaut, with its vast tools to demoralize and exhaust teachers, as well as overwhelm parents and communities, will continue to roll as long as teachers continue their wholesale surrender. Apathy has enabled the privatizers and is, in fact, the foundational culprit in this battle: our unions are only as strong as their members demand they be, through individual participation.

Moreover, the current union response is an opportunity to rethink the role of our unions: Instead of always being in reactive mode and on the defensive, which has been the M.O. for more than a decade, isn't it time our union leaders got on the offensive? That's true leadership. In the endgame, forcefulness could very well mean the difference between an aborted pass and losing the game, to a handoff to win it. Until then, for teachers, SAD is not seasonal, but chronic.

Yet, in this winter of our discontent, take heart: there are millions of us. And though we'll have to wait a few months for good sunlight, we can all -- teachers and union leaders -- get out there now and bask in the glow of truth and integrity that only bold activism can bring.

See you in the streets.