I had been covering veterans' issues for several years and thought I'd developed a thick skin. But the pain on the other end of the telephone line was difficult to stomach. Sergeant Chuck Luther, now back from Iraq, was describing his journey to hell and back. The worst part, he said, wasn't battling insurgents or even the mortar blast that tossed him to the ground and slammed his head against the concrete — it was the way he was treated by the U.S. Army when he went to the aid station and sought medical help.

In gruesome detail, Luther described what happened to him at Camp Taji's aid station. He thought he would receive medical care. Instead he was confined to an isolation chamber and held there for over a month, under enforced sleep deprivation, until he agreed to sign papers saying that he was ill before coming to Iraq and thus not eligible for disability and medical benefits. "They wanted me to say I had a 'personality disorder,'" Luther told me. 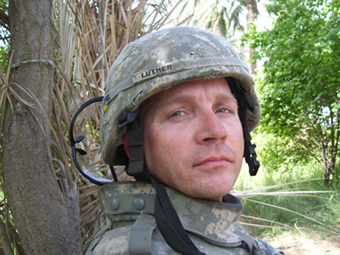 Luther's call did not come out of the blue. For two years I had been investigating this personality disorder scandal: how military doctors were purposely misdiagnosing soldiers, wounded in combat, as having this pre-existing mental illness. As in the civilian world, where people can be locked out of the insurance system if they have a pre-existing condition, soldiers whose wounds can be attributed to a pre-existing illness can be denied disability benefits and long-term medical care.

My reporting began with the case of Specialist Jon Town, who was wounded in Iraq, won a Purple Heart and was then denied disability and medical benefits. Town's doctor had concluded that his headaches and hearing loss were not caused by the 107-millimeter rocket that knocked him unconscious but by a pre-existing personality disorder.

The spotlight on Town prompted military doctors to step forward and talk about being pressured by their superiors to purposely misdiagnose wounded soldiers. One doctor spoke of a soldier who returned from Iraq with a massive chunk missing from his right leg. The doctor quit after he was pressured to diagnose that soldier as having personality disorder.

Since 2001 more than 22,600 soldiers have been discharged with personality disorder (PD), saving the military billions in disability and medical benefits.

My articles on the scandal sparked a Congressional hearing, a Law and Order episode, and before leaving office, President Bush signed a law requiring the Pentagon to investigate PD discharges. In the wake of those developments, I was flooded with calls from soldiers who had fractured bones and been pierced by grenade shrapnel, only to be told that their wounds came from a problem with their personality — a pre-existing illness that had somehow gone undetected with each military screening and only popped up now, after they returned wounded from combat.

Luther was one of thousands severely wounded in Iraq and Afghanistan now facing a lifetime without medical care. I had spoken to dozens of soldiers in his shoes. But his call haunted me. He sent me photos of the isolation chamber. It was the size of a walk-in closet and was crammed with cardboard boxes, a desk and a bedpan. Armed guards monitored him 24 hours a day. Luther told me how they stopped him from sleeping, keeping the lights on and blasting heavy metal music at him all through the night: Megadeth, Saliva, Disturbed. When he rebelled, Luther was pinned down and injected with sleeping medication.

"This was an aid station," he said, "but it felt a lot more like enhanced interrogation than medical care."

After a month, Luther was willing to sign anything — and did. Soon after he signed his name to a personality disorder discharge, he was whisked back to Fort Hood and informed about a PD discharge's disastrous consequences. No disability pay, no long-term medical care, and because he didn't serve out his contract, he'd have to pay back a portion of his signing bonus. "They told me I now owed the Army $1,500."

I would spend the next two years investigating Luther's case: reading the stacks of medical records written by Luther's doctors, which document his confinement; talking with a fellow soldier who visited Luther during his month in the aid station; and interviewing his commander, who confirmed all the details.

This week Sergeant Luther's hellish struggle is featured on the cover of The Nation. As word of his story and the larger personality disorder scandal spreads, my phone is ringing again, this time with people asking what they can do to help these soldiers. I tell them: Share the article with friends, family, colleagues, your representatives in Congress.

America needs to know what is happening to our soldiers.