Every mother has a story worth telling. This is mine.

When I was a little girl, I dreamed about being a mommy. I used to play with dolls like they were my babies. It all seemed so simple to me. The dolls slept through the night and never got sick.

That dream stayed with me through all the adventures, misadventures and growing up that happens to us all. After I met my husband, we dreamt about the simple joys of being parents.

I became pregnant shortly after we got married, and the dream began to unravel. First, I had a rough pregnancy. I had morning, noon and night sickness. I ate junk, didn't exercise and slept all day. There was never a moment when I wasn't worried about my baby. If I didn't feel him move every hour, I would make an emergency appointment with my OBGYN for her to check his heartbeat. I begged for so many ultrasounds so I could make sure he was doing OK. I later learned that I suffered from Antepartum Depression (depression during pregnancy).

Because of my severe anxiety, I decided to be induced so I could feel in control. The night I got to the hospital I was given an epidural and Pitocin. 24 hours later and still no birth. Finally, at hour 33, I was told it was time to push. But then my baby got stuck under my pubic bone and it was impossible for him to come out. I had been taken off the epidural, and the pain of pushing for six hours got so intense that the doctor ordered pain killers. By hour 38, my son, Hunter, was delivered with forceps. I had an episiotomy.

My labor and delivery were less than ideal, but they were behind me. What I didn't know was that the nightmare was just beginning.

When Hunter was born, he did not cry. They called Code Blue (a code used to indicate that a patient needs resuscitation). I remember lying on the hospital bed being sewn up and watching as everyone surrounded my baby. They took him away from me so quickly that I did not even get a chance to hold him. I waited, and they finally told me he was OK and he was probably in shock from the delivery and all of the drugs. Two hours after he was born, he cried for the first time.

Two days after we were home from the hospital, everything shifted. I was so scared. Nothing felt right. We took Hunter in for his first check-up. While the doctor looked at him, I sat down in a chair with my head in my hands. All I kept saying was, "Someone please help me."

I wasn't eating or sleeping, and I had intrusive thoughts that were telling me I was a horrible mother. I became paralyzed with fear. I dealt with the fear by becoming completely disassociated. I was not present with anyone. Even my baby.

There is a saying, "When it rains it pours." Not only was I struggling to survive, but what made matters worse was that Hunter developed severe reflux. Every day we prayed that he would drink enough milk to keep him from being dehydrated. We ended up in the hospital quite a few times, so that he could get IV liquids. My child was in pain. I felt lost.

I also started to get angry at a lot of things; mostly my husband. I remember one day he took Hunter for a walk without telling me. I ran out of the house and screamed at him in front of all the neighbors. Everyone looked at us. I didn't care.

My worst memory was when my son was a couple of weeks old. I was holding him and staring out the window, wishing I could go back in time. I felt trapped in fear and there was no way out. I honestly did not know how I would get through the day.

When Hunter was six weeks old I joined a Mommy and Me class. The first day when we went around the room to introduce ourselves, I told the other moms that I had postpartum depression (PPD). They were all so supportive. One woman gave me the number of a psychiatrist she heard had helped others with PPD. This new doctor put me on a cocktail of medication. After a couple of months, I stabilized. I was able to start my journey of recovery.

Unlike the dolls I played with as a little girl, Hunter did not sleep through the night or eat enough food to sustain him until he was almost 2 years old. But, I learned that if you do not give up you have a great chance in getting better. At 6 years old, Hunter is a happy and healthy boy.

There has never been a day that has gone by in the last six years when I forgot what we went through. I have many regrets with the choices I made throughout my pregnancy. However, I do not think that I would have such patience and love towards Hunter if I hadn't gone through this ordeal.

Were it not for the support I received at that Mommy and Me class, I don't know how I would have survived. Organizations like MotherWoman provide safe places of mutual and respect and non-judgment where mothers can support each other as they navigate the realities of motherhood.

Three years after my son was born I was interviewed for a documentary on postpartum depression called When The Bough Breaks. I connected with the two wonderful fellow mothers who were making this film: Jamielyn Lippman and Tanya Newbould. I was honored when they asked me to come on board as a producer for this important documentary. I felt that there had to be a reason why my family went through such pain. I soon realized that the reason was to help other women.

When The Bough Breaks tells the stories of brave women with postpartum depression, ranging from the baby blues to postpartum psychosis. There are so many questions which have previously gone unanswered. This film asks those questions.

It tells the stories that must be told. 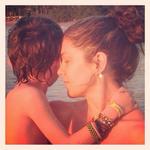 Lindsay Lipton Gerszt was born and raised in Miami, Florida. She had a successful 10-year career in the music industry before stepping back from to begin her beautiful family.
It was at this stage in her life that she came face to face with postpartum depression (PPD). She has now committed herself to raising awareness for PPD, its many faces and the path to a healthy life and family. Her commitment to PPD has included working on the important documentary When The Bough Breaks. This work has included fundraising, filming and telling her story and helping other women tell their story.