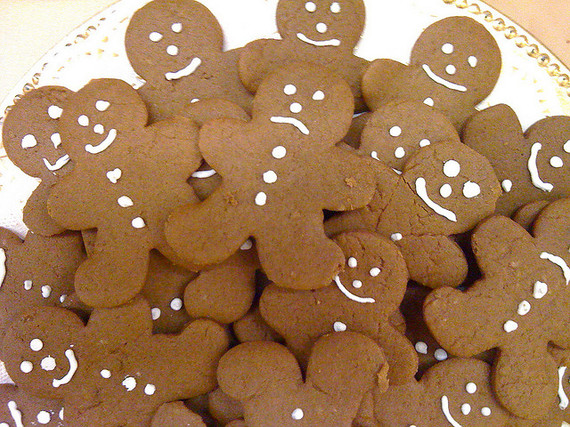 Up until a few years ago I was one of those people who had her tree, decorations and an entire DVD watchlist of Christmas films planned starting from the first of December. Christmas being my second favorite holiday after Halloween, I'd often bankrupt myself buying gifts for family and friends. Mulled wine, parties, watching It's a Wonderful Life on Christmas Eve, A Miracle on 34th Street for Christmas Day, stockings, presents, love. It was such a wonderful time of the year.

Then came December 24 of 2008, when my father decided to bring his mistress of 30+ years -- my entire life and his entire marriage to my mom -- to family Christmas functions. Turned out my mother and I were among the few who didn't know about the other woman. At the time, my husband and I were living in Prague and for the holidays we'd traveled to Sri Lanka -- my father's home country and to where my American mom had decided to retire. Meanwhile, back in my husband's home of Florida, his aunt passed away unexpectedly and we were helpless do anything from so far away. My parents divorced shortly after and with it my entire family split.

In the years since it's felt a chore to put up a tree at all, and Christmas movies? Well, I never thought I'd personally relate so much to Scrooge. Or the Grinch. Only, there's no saving this holiday.

Because next came December 14, 2012, the day of the Sandy Hook school shooting in Newtown. Having my own memories of a gun crime and the PTSD that goes with it: As I heard the stories coming out of the school and learning the kids were the same ages as ones I used to work with in Prague... I felt like I was there as the massacre went down. I would close my eyes and see their horror. I would open my eyes and the horror would still be there.

And it was Christmas. The presents those little angels would never get to open. The survivors with a wicked journey towards healing ahead of them. The parents and the unbearable sorrow of burying their children.

Having only been repatriated to the United States for a short while -- and living in constant terror of new gun violence -- I internalized the events at Sandy Hook Elementary to the extreme where stress caused me to skip a period. When it finally arrived almost three months later the physical pain was among the worst I've ever experienced. I lay there, body spasming, eyes watering, holding my belly, thinking about the Sandy Hook moms -- and all the moms who have lost their children to senseless gun violence -- all the physical agony they went through to bring their children into the world only to lose them because of this country's perverse lack of gun control.

Turns out, this is not the most wonderful time of year at all. Blood pressure and depression increase around Christmas time, as well as social pressure and (often unreasonable) expectations to participate in the culture of consumption that has become Christmas as we know it.

Social media is wonderful for sharing photos of trees and parties and presents waiting to be opened -- unless Christmas has negative associations; then social media becomes a new portal into personal hell. I've seen a number of friends swear off Facebook until the new year because everyone else's apparent holiday joy was making them feel worse during this complicated and emotionally-fraught time of year.

Since our Worst Christmas Ever my husband and I have virtually stopped exchanging Christmas gifts. Instead, each year on behalf of each other and those we love we make a larger and larger donation to Smile Train, a non-profit organization that provides harelip surgeries for children in developing countries. Doctors donate their time, and the money Smile Train collects goes towards the necessary supplies to perform the corrective surgery. These procedures make the difference between a child (and sometimes also his or her family) being a perpetual outcast or the chance to live a normal life. The before and after pictures will break your heart and mend it all in one go.

The first time we donated Smile Train, chose the amount and clicked send, both of us were unexpectedly overwhelmed with the magnitude of such a small gesture -- replacing gifts and cards with a contribution towards changing a child's life for the better -- that we cried and held each other tight. And now that's our new Christmas ritual.

I also decided that the spirit of giving espoused by all those Christmas tales I used to love is something I'd rather practice all year long. I give away at least one painting a month, regularly send friends care packages, and my husband and I treat each other with surprises whenever the giving moves us. "Christmas" is all year in the Lighthouse Point Koehler household.

Now that I no longer have any family requirements during the holiday season -- another reason to be thankfully childfree -- I use this time for quiet reflection.

And this year I also gave myself two full weeks off from work to finally finish my second novel. There's nothing like completing a long-overdue project to combat the Christmas season blues.

Still, each day my heart goes out to the Sandy Hook parents who lost their kids two years ago and all the survivors of that wretched day. I honor every person who has an absence in their life this year because of gun violence. I say a non-denominational prayer for everyone around the world who now has to muddle their way through the waters of PTSD and figure out how to cope.

To all of you who, like me, struggle through this time of year: Please be gentle with yourself. If grief visits, let it. Reach out if you need help. Set clear boundaries and don't be afraid to honor them even when you're feeling pressured not to. Don't force things, and especially don't force yourself. It's hard enough already, you're doing the best you can and that is more than enough.

Don't forget: This too shall pass. Enjoy what you can, leave the rest.

This isn't the most wonderful time of the year, it's just another part of it. And it will be over soon.

In solidarity and with love,