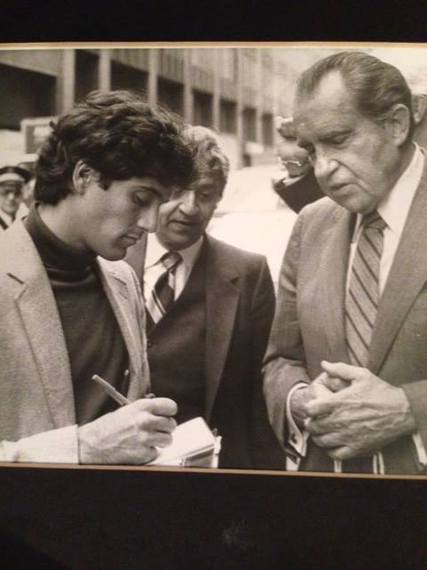 Look at me in this remarkable photo! Or is it really that remarkable?

I'm the guy on the left, as you probably guessed. You certainly recognize the guy on the right. He was the 37th President of the United States, until he resigned in disgrace.

I was a young reporter when this photograph was snapped, looking pretty cool in my Steve McQueen turtleneck.

Don't I look like I'm giving Richard Nixon the third degree? Was I an SYJ (Serious Young Journalist), or what?

Well, yes and no. Every picture tells a story, but sometimes the story falls a little short.

It was October 1982, and I was on my way to interview a "Wingo" contest winner for the New York Post, along with veteran photographer Arty Pomerantz.

That was my beat - writing about contest winners. Nearly wore out the exclamation mark key on my keyboard doing it.

Anyway, we were cruising along 52nd Street when Arty noticed a long black car limo pulling up in front of the "21" Club.

"Let's see who gets out," Arty said, and there he was - Richard Nixon, on his way to lunch!

We scrambled to get to him. He was happy to stop and shake my hand. I was stunned by how tall he was, and my hands shook as I got out my pen and notebook.

"What paper ya with?" he asked, in that deep, growly voice I'd heard a million times on TV, including the night in 1974 when he surrendered the presidency. When I told him I was with The Post, he beamed.

The gubernatorial election was upon us, and I asked him who he was supporting.

"Lehrman!" he said, referring to Lew Lehrman, who was running against Mario Cuomo. I asked him a few more questions before he hurried off to lunch, then Arty and I went to interview and photograph that Wingo winner.

But who cared about that? I had an exclusive interview with Richard Nixon! I couldn't wait to get back to the office.

The Nixon photos were quickly developed and we ran them out wet, eager for the city editor's reaction.

Which was a shrug. "Who cares? Hey, keep the Wingo winner to six graphs."

Who cares. Well, that was a jolt, but it was also a good lesson. Nixon was a private citizen, long out of the limelight. Fame fades, even for a guy who was once the leader of the free world.

Something to keep in mind these days, after those endless months of hysterical crowds cheering for their presidential candidates.

So Nixon was out, but the Wingo contest was vital to the paper. It kept the circulation circulating, or so I was assured.

I sat down and cranked out six snappy paragraphs about that week's winner. As I recall he was a Greek from Astoria who was going to use his prize money to live his dream and open a diner.

A Greek opening a diner. Stop the presses.

Well, so it goes, as Kurt Vonnegut used to say.

You live, you learn. I no longer wear turtlenecks - with my neck as it is now, it would be redundant. My precious Nixon photo is in black and white, but since those days I've become a great believer in gray areas.

Admit it, though - if you didn't know what I've just told you, wouldn't you think it was a hell of a shot?

Charlie Carillo is a novelist and a TV producer. His website is www.charliecarillo.co