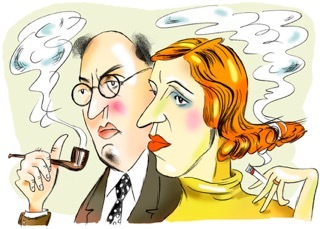 My former Amsterdam neighbor calls me with a remarkable request. He wants me to visit the grave of Lotte Lenya.

"Lotte Lenya," he says, "the singer of The Threepenny Opera."

Ah, now I remember. I used to hear The Ballad of Mack the Knife coming often from this neighbor's house. The shrill voice of Lotte Lenya, with her German accent, rolling her R's, singing:

This song invariably send chills up and down down my spine. But it does not bother my otherwise amiable former neighbor, Mackie, who tells me he was actually named after this famous knife-slasher.

The legend of Mackie was created in the eighteenth century in England as Macheath, starring in the popular play The Beggar's Opera by John Gay. This Mack is a kind of Robin Hood, an idealistic romantic who steals from the rich and distributes the booty to the poor.

The playwright Bertold Brecht makes something quite different from this story in Germany in the late 1920s. Macheath is now Mack the Slasher, no longer a hero who rejects violence, but a wife-cheater, whore-runner and hooligan, who for the right price will stop at nothing. The piece is a devastating parody of the decadent Weimar Republic.

The composer Kurt Weill then put it to music. His wife Lotte Lenya sang it everywhere in her raw, untrained voice. It became a great success, performed thousands of times in Europe.

But in Germany it also became very unsafe. The Nazis forbid The Threepenny Opera in 1933, the year when Weill and Lenya, like many other Jewish artists and scientists, fled the country and eventually emigrated to the United States.

Mackie Messer also leaves Germany and settles as Mack the Knife in America, where he makes his Broadway debut. There he is on stage, cleaned up largely stripped of his unseemly past. The ruthless and cynical assassin has turned into a nice gentleman. The barrel organ, which accompanied Lotte Lenya with its monotonous but terrifying simplicity, has been replaced by a big jazz band. Lotte Lenya sings the song in New York, but the uncomfortable Weimar feeling of fingernails scratching on the blackboard is totally gone. In America, Mackie is a jazzed up lollypop.

The song was originally made a hit in the U.S. by Louis Armstrong, singing the grusome, bloody text with a smile on his face. It turns worse in the No. 1 hit by Bobby Darin, an uptempo pop tune with a ring-a-ding Rat Pack atmospheric. It's slick and soulless, and even though Darin won a Grammy for it, I find it irritating.

Then, just when you think the abuse of this song could not get worse, it does. There is the advertisement for McDonald's in the 1980s when Mack the Knife has been corrupted into Mac Tonight. Admittedly, the cheerful voice of Louis Armstrong is something scary, but it is nothing like the terrifying figure of Mackie Messer evoked evokes in the voice of Lotte Lenya.

Mount Repose is a cemetery not far from New York City. Here is where Lotte Lenya lies beside her beloved Kurt Weill. On his tombstone there is carved a musical score. I like to think that Lotte still sings for him there, with her shrill but very real voice.

On behalf of my neighbor Mackie I place a flower between them both.