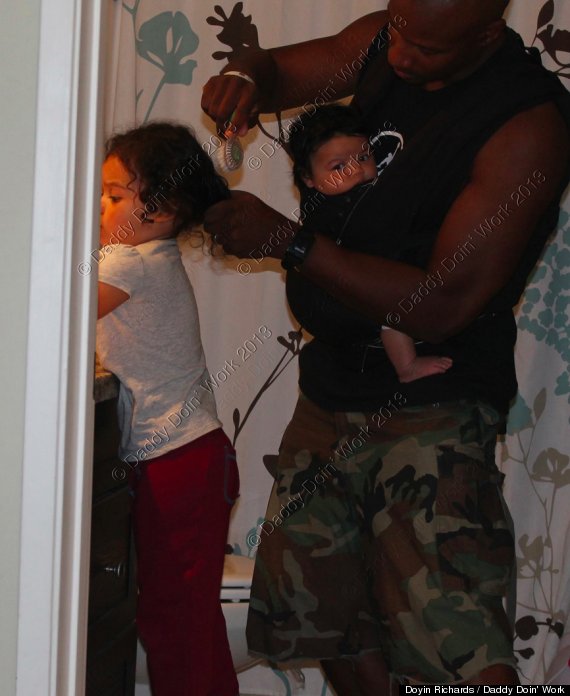 When I posted a photo of myself and my two daughters, I never expected it to go viral. Nor did I expect the racist backlash. But both things happened, and I'm only now -- after catching my breath -- ready to address the conclusions. Here's the quick backstory. Once I submitted that article, I figured everyone would be on the same page regarding the photo and the craziness that ensued.

Then the narrative changed.

As fortunate as I was to travel and meet some of the nicest media members and TV personalities in America, I became puzzled when I was dubbed the ultimate Mr. Mom, the master multi-tasker, super dad, and Cliff Huxtable 2.0. In some circles, the racist mail that found its way to my inbox became a focal point.

Receiving praise for doing things that every good parent does everyday and giving attention to the bigots of the world who keep forgetting to "tuck in their stupid" whenever they access the Internet was far from my intention.

This story shouldn't be about placing me on the Mount Rushmore of fathers because of a photo. Don't get me wrong here, it's an adorable shot and I'm extremely flattered by the kind words I've received from people who think so -- but I've shared hundreds of pictures of my family on social media and none of them received a fraction of the attention that this one did. Just like the other photos of me with my girls, it's simply another example of a dad ... well, "Daddying." Additionally, I'm concerned that the bar for being a good dad is set so low that a dude can take a photo with his kids, post it online, and automatically become the "world's greatest dad" in the eyes of some because of it.

For that reason, many understandably wondered why people are losing their minds over a dad doing what a dad is supposed to do for his kids. There are fathers all over the world who brush their daughters' hair or proudly walk the streets with babies strapped to their chests. I bet some actually could do both at the same time (that would be a sight). It's second nature to them.

The story also shouldn't be about racist messages that came my way. Anyone who operates a moderately popular blog will receive his or her share of hate mail -- and obviously since I'm black, some of the hate mail that crosses my desk is racist in nature. Hell, some of the correspondence I received in the past week since the photo and accompanying blog post "broke the Internet" makes the earlier stuff look like a Michael Bolton love song by comparison.

I'm a black dad, I'm a black dad who blogs about being a dad, I have a half-white/half-Japanese wife, and the color of my baby girls' skin is a few shades lighter than mine. Pick one of the items from that list and I'll pick out someone who's mad at me because of it. It is what it is, and it comes with the territory. Nothing to see here. Let's keep it moving.

What I will welcome from this, however, is a healthy dialogue regarding the roles of modern fathers across the world. As a blogger, author, husband, and dad, this is something I will gladly talk about until I'm blue in the face, because it is a discussion that will undoubtedly make a difference in the way men and women view fatherhood. The other stuff is just a hemorrhoid on the ass crack of life.

If people view me as the guy to help facilitate that discussion, that's great. But here's the thing -- I've been that guy long before this photo came to light. I just had no damn clue that a seemingly innocuous picture would be the reason why I popped up on the world's radar. But hey -- it's pretty cool that a photo depicting what I do everyday for my kids is sparking a worldwide discussion regarding what fathers should do everyday for their kids.

As I mentioned in my previous blog post, I have a dream that people will see a photo like this and not think it's a big deal. Obviously we aren't there yet, but you can bet your ass that I'll do whatever I can do to ensure that is the case by the time my kids and your kids are ready to settle down and have families of their own. With the help of other parents who feel the same way, I know we'll get there.