"If the Earth were your body, you would be able to feel the many areas where it is suffering."
Thich Nhat Hanh

Some mornings, we turn on the news and we are heartbroken. We learn of violence and anger and hate and rage. Our stomach sinks. Our heart aches. Our throat clenches. Our bodies do feel the suffering of the world.

It's at times like this, when the world breaks our heart, that we have trouble being mindful, being nonjudgmental.

The "easy" response is to want to break the world right back. To blame, to scapegoat, to demand revenge.

But I think practicing mindfulness means we've accepted the challenge to help heal the world.

It's when mindfulness is so damn hard that it is most needed. The days that break our heart are the days that remind us of the importance of our compassionate engagement with the world.

I had a hard time being on Facebook this weekend, for amidst the Parisian hearts and triumphant Eiffel Towers, I saw hatred and judgment and racial epithets. When I posted this on my blog's Facebook feed Saturday morning, 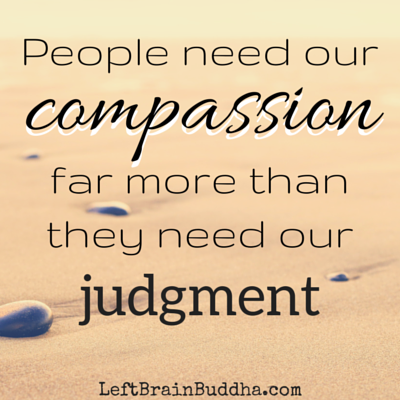 someone added this comment: "Radical Islamists do not need our compassion any more than Nazis did. They need to be exterminated from the face of the earth, as the Nazis did."

While I understand the anger, I can't agree with the sentiment.

Even the bad guys.

Even the guys who break our hearts.

A few weeks ago, as we explored compassion and lovingkindness in a mindfulness class I was teaching, a participant asked, "Do we include people like Hitler in lovingkindness practice?"

But the hard answer is, "Yes."

When we practice compassion, we don't exclude anyone.

For compassion is fundamentally a recognition of our common humanity.When you suffer, I suffer. What pains you, pains me.

I was thinking about this even a few days before the tragic events in Paris, after I listened to a morning news report of an interview with Jeb Bush, in which the reporter asked him, bizarrely enough, if he would have killed baby Hitler if he had had the chance.

Despite the absurdity of the question, and the ridiculousness of posing this question to a presidential candidate, Bush responded, that yes, he would kill baby Hitler. My mouth dropped. Really?

The newscasters wholeheartedly agreed with Bush's response. One of them even said, "There's only one answer to that question: YES. How could anyone answer differently?!?"

I was stunned. Was I the only one who couldn't give a definitive YES on that question? Perhaps it's because I am a history teacher and know the illogical nature of counter-factual thinking. But I was really wondering, "You think it's that simple? You get rid of one guy and you stop evil? What if instead of killing baby Hitler, you prevented his parents from dying when he was young, leaving him to live on an orphan's pension and in homeless shelters as a teen and young adult? What if you addressed the anti-Semitism that had been brewing as a small-but-not-insignificant component of German nationalism for a century before his birth? What if you rewrote the Treaty of Versailles that doomed the German democracy in the 1920's before it was even born? What if.... What if....?..." The events of history are not so easily reducible.

The problem with all of this thinking -- killing one bad guy, "exterminating" the extremists -- is that it assumes that they are somehow fundamentally different from us.

It's too easy to write off the bad guys as "crazies," as "psychopaths." Are some of them legitimately unbalanced? Probably. But I'm not a psychiatrist, so I'll leave that diagnosis to the professionals.

What I do know is that as human beings, we have an innate capacity for goodness, as well as a capacity for evil. Which capacity is nurtured? Which one will manifest itself in our lives?

Sadly, our human history is full of examples of man's ... inhumanity to man. But we also know that -- terrifyingly -- many of those acts were committed by ordinary men. In Christopher Browning's powerful book Ordinary Men, he studies the experiences of a special WWII battalion that was assigned to carry out the Final Solution in Poland in 1941. The men truly were ordinary men -- fathers, sons, teachers, laborers -- that ultimately committed some of the most atrocious acts of the Holocaust. They would round up innocent civilians and then shoot them (unarmed, and often naked) into mass graves.

The first time the battalion had to carry out a roundup, the men were horrified. The generals had to keep the men drunk for a good 48 hours afterwards, and the men had nightmares for weeks and were clearly distressed. But then these acts became normal. The men started to look forward to them. Even when the men were given -- at every new roundup -- the chance to opt out, over 80% of them agreed to carry out their duties.

Browning's book ends by asking us a chilling question: if these men could become killers, what group of men could not?

In the 1961 film Judgment at Nuremberg, a fictionalized account of the trial of Nazi judges and justice officials in 1948, Judge Dan Haywood (played by Spencer Tracy) states that if the defendants had been "depraved perverts -- if the leaders of the Third Reich were sadistic monsters and maniacs -- these events would have no more moral significance than an earthquake or other natural catastrophes. But ... under the stress of a national crisis, men -- even able and extraordinary men -- can delude themselves into the commission of crimes and atrocities so vast and heinous as to stagger the imagination."

To say that those who commit evil and atrocious acts are psychopaths is, in many ways, the easy way out.

Then there's nothing we can do, because "crazy is as crazy does." We mourn the dead, and we move on, wiping our hands of the incident -- whether it's a school shooting or an act of terrorism or even an act of genocide. These things can't be prevented, we hear some of our officials say.

When we take this view, we assume that the answer IS to kill the little baby that history tells us will become a mass murderer, instead of seeing an infinite number of opportunities to transform the world in which that little baby will grow up.

I took a semester-long course on the Holocaust in college, and we spent weeks and weeks discussing responsibility and blame and guilt and the "good people who do nothing" and allow evil to triumph. I remember my professor asking us, How do we create a society where people stand up to evil? How do we create a society where the good is nurtured in people?

I'm simply asking that we see them AS PEOPLE, not monsters. I'm asking that we, as Brene Brown encourages us to do in Rising Strong, hold them accountable for their actions, while also acknowledging their humanity. I'm asking you to simply consider what happens in a person's life to lead them to commit these acts.

I'm asking you to include all people in your sphere of compassion. There's no need to ration compassion. Including the "bad guys" in your wishes of lovingkindness in no way limits the amount of love and empathy you can send to their victims.

This is when practicing compassion is HARD. If it were easy, we wouldn't celebrate the Gandhis and Mandelas and Jesuses and Buddhas who exemplified this form of lovingkindness.

Ultimately, I'm asking that you simply wish ALL PEOPLE be happy, healthy, and loved.

Because people who are happy and healthy and loved probably won't hurt other people.
*****
"Practice gentleness, seek truth, give up anger, do not slander, and have compassion for all beings. Be gentle, modest, and useful to others."
Krishna, in the Bhagavad Gita
*
"When you see yourself in others, it is impossible to hurt anyone else."
Buddha
*
"You have heard it said, 'You should love your neighbor and hate your enemy.' But I say to you, love your enemies and pray for those who persecute you."
Jesus, in the Gospel According to Mark
*
"Do not turn away from those you consider sinful and unworthy. If you have wisdom, you will try to save everyone."
The Tao Te Ching
*
"What are we going to do this morning when we wake up? How will we conduct ourselves today? Can we be a center of peace, sanity, and well-being right now?
How we choose to be and what we choose to do are important. They make a difference. Indeed, they make all the difference."
Jon Kabat-Zinn