Employees at an ACE Hardware store in rural Georgia turned their love of AMC's "The Walking Dead" into a zombie obsession. But their preparations for a zombie apocalypse, captured in a documentary accepted by the Sundance Film Festival, have "offended" ACE Hardware and may cost some participants their jobs.

A group of college students from Georgia State are behind the pseudo-mockumentary, "When the Zombies Come," about the zombie-loving employees of a Lawrenceville, Ga., ACE Hardware store.

The characters' obsession has warped the way they see the store and its customers. Perhaps most affected is the self-professed group leader, Alex Warner, who describes in the short film how he is using tools available at the store to prepare a zombie apocalypse, should one ever arrive.

"It turns out there's a lot of weapons we can use to kill zombies," he says in the Jon Hurst-directed film. "And people don't look at you much as crazy when you're making a potato gun, fill it up with sockets to shoot, if you say you're gonna kill zombies with it instead of little kids."

Warner goes on to explain his plans to make the ACE Hardware in Lawrenceville his base of operations during a disaster scenario. "I took it a little overboard," he admits, adding later, "I was like, 'Everyone can come, just no kids and no bitches, because it's all about survival. We're not there to take care of everybody."

Warner also details the weapons he will use and the steps he will take to survive a rise of the dead. He does manage to make some insults along the way, calling elderly people "easy targets" and ACE customers "stupid."

Catch more of his antics in the clip above.

Although "When the Zombies Come" beat out 8,000 other films to place at Sundance, it was not applauded by everyone, according to NBC local affiliate 11 Alive. Executives at ACE responded with a Facebook message criticizing the film:

Ace Hardware was not aware that a deplorable video encouraging violent behavior was produced and we did not approve the use of our brand or store in the filming of that video. We are aghast and outraged that these individuals used our nationally recognized brand in this film. This video does not in any way represent Ace Hardware and the thousands of hardworking Ace employees that are knowledgeable, friendly and dedicated to serving Ace customers. We are making every effort to remove this video from all online sources. We greatly value our customers as well as our "helpful" brand image and are deeply offended by the content of this video.

ACE also sent Hurst a cease-and-desist letter demanding the director remove the YouTube video due to possible damage to the brand and trademark infringement, according to 11 Alive.

Hurst, for his part, says he never meant to tarnish customers' perception of ACE. "The meaning I was hoping to express in the documentary was a dark comedic relation between killing time at work and the fandom [around zombies]," he told Social News Daily.

As for Warner, Hurst says he has not been "officially fired," but he has lost all his hours and his name has been removed from the work schedule, according to Social News Daily. He thinks ACE is "pretty much backing [Warner] into a corner to quit." 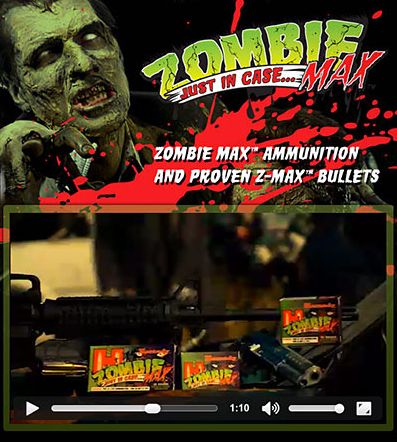 1 / 5
Zombie Ammunition
According to the <a href="http://www.hornady.com/ammunition/zombiemax">Hornady</a> website , its Zombie Max ammunition and Z-Max bullets are “proven”—“Have you seen a zombie?” the text says, by way of backing up this claim. The site also has a disclaimer asserting that these live ammunition bullets are only for zombie use—never on human beings, plants, vegetables or minerals. The idea came from Hornady President Steve Hornady, who is a fan of zombie movies and TV shows. Earlier this year, firearms salesman John Murray <a href="http://www.cnbc.com/id/47737718/Bullet_Maker_Sets_Sights_on_Zombie_Killers">explained</a> to CNBC who these bullets are for. “Everybody. They work just like any other bullet, but the tip is green.”
Hornady.com