There are moments when our romantic relationship takes a surreal turn. For Topher,* it was the moment when he opened his laptop and discovered that Dan, his partner of over 7 years, had been cheating on him.

"We'd always talked about how we were disgusted by people who cheated," Topher told me, still baffled by Dan's behavior.

When Topher initially confronted him, Dan lied -- and continued to lie -- until Topher showed him the proof. Even in the face the infidelity, the denials, a surprising thing happened. Topher wanted to work on the relationship. Though they did eventually fall apart, Topher still finds himself wondering, "Did we give up too easily?" 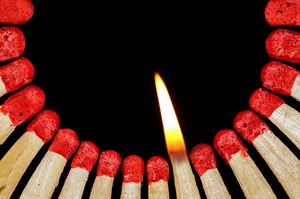 As a psychotherapist (and friend and colleague and daughter), I often find myself musing on this question: How does one make that decision -- to stay and fight or finally relinquish a romantic relationship?

Jesse and Malik met on OK Cupid. "We both entered it knowing things about each other that should've indicated that we shouldn't go there," Jesse said, reflecting on the relationship that has lasted just over two years, but now teeters on the edge of collapse.

Malik, for example, knows that he does not want children. Jesse does. Yet, they love each other and, in a way, are tortured by this love.

"Maybe I'm depriving myself of something important that I want or need," Jesse is thirty-three now. She and Malik moved in together two months ago and, in some ways, things feel better than ever, but then there are the arguments.

"We both feel so much love for each other, yet we keep cycling, getting to this place of doom and helplessness... and then we make it through," But the peace never lasts long. Jesse often finds herself wondering, "Should it be this hard?"

Many couples find themselves caught in this "cycle" of which Jesse speaks. As reliable as clockwork, things are going well and then, seemingly out of the blue, a switch occurs. For some, it is a rage. For others, a heavy, helpless sense of futility. Old problems flare up with renewed vigor, never seeming to resolve.

Each person brings his own unique set of zany unconscious dynamics into a relationship. You've all had the friend (or -- ahem -- been that friend) who continues to date the same type, exclaiming, "This one's different!" only to play out an eerily similar relationship pattern again and again.

This is what makes relationships so difficult for those of us with any modicum of insight. We know that we are bringing something of our own blind struggle to the table, so how can we figure out whether we need to change, our partner needs to change or... both?

When couples find it impossible to enter therapy together, it is not uncommon for individuals to seek help when trying to understand -- is the problem you or me? 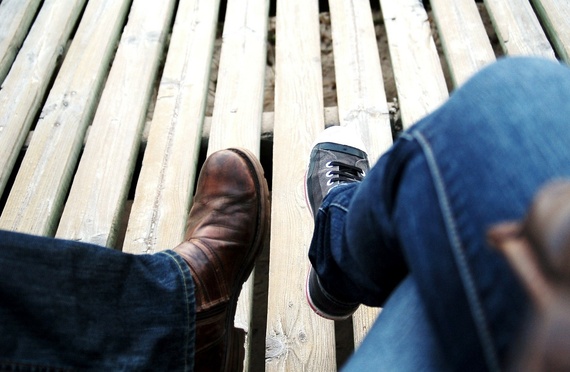 Naya is in the midst of asking herself this very question. Her relationship with Ahmed has been a confusing one. Her first relationship began in marriage and ended in divorce. She hasn't dated much, which has affected her sense of self-worth. Ahmed's and his parents immigrated to the States when he was eight. He struggles to balance his parents' conservative values regarding relationships with his desire to embrace Western ideals of romantic experimentation.

"Four years in, he still hadn't said I love you," Naya told me when trying to describe the difference between their relationship pace. Now, five years in, Ahmed is still reluctant to introduce Naya to his family. They still live apart, as he needed his space.

Despite Naya's attempts to be clear about how hard Ahmed's ambivalence was for her, he refused therapy as he thought things weren't "desperate" enough yet. So, in early January, Naya ended the relationship.

Only, she and Ahmed still see each other. Yes, he struggles to express emotions. Yes, he is reluctant to go to therapy. Yes, he dismisses her desire for something more. Yes, she has yet to meet his family, but... Naya feels comfortable with him. It's easy for them to spend time together.

In late October, Naya found herself lying to her father about meeting Ahmed's family. She wanted to protect her partner, the relationship, yet to do so, she went against her own sense of integrity.

What keeps you from really ending it, I asked Naya. 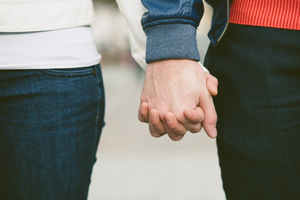 "My problem is trusting myself," she told me. She admitted that, perhaps, she wants to delay the grief that comes with the final goodbye. Sure, the relationship is far from perfect, but maybe it's as good as they get. "Extending the 'what-ifs,' the 'if-onlys' keeps me staying just a little bit longer."

Breaking up is hard work. It takes a psychic and emotional toll -- not to mention the concrete considerations like dividing up material things, disentangling finances and divvying up friendships. Just how hard do things have to get in order for one to go down the road of separation?

And then there is the potential for growth. Each and every one of the people I spoke with for this article talked about the hope they had that their partner could grow, could change, could eventually come to participate in the relationship in the way that they so desperately wanted. It was hard to give up on a partner who, in some ways, was falling short, yet expressed the desire to change.

And there's the rub. Julia loves Nick. They had a fast friendship, which quickly became something more. She was struck by the idea that Nick was someone she could spend her life with.

But then there's this: She moved to San Francisco to pursue her Master's degree in architecture. She loves the idea of a life where she and her partner could pick up and move to any city together, raise a family. Julia craves expansion. Nick, however, does not. He wants to change, but fears leaving his tiny, fundamentally religious town where such modernities like Wi-Fi has yet to arrive.

"It's absolutely maddening," Julia tells me as she describes getting caught in the loop with Nick. Does she leave and find an emotional and intellectual equal? Does she stay and grow into the solid base that Nick provides? "It's emotionally and psychologically draining, an illusion of comfort and trust." 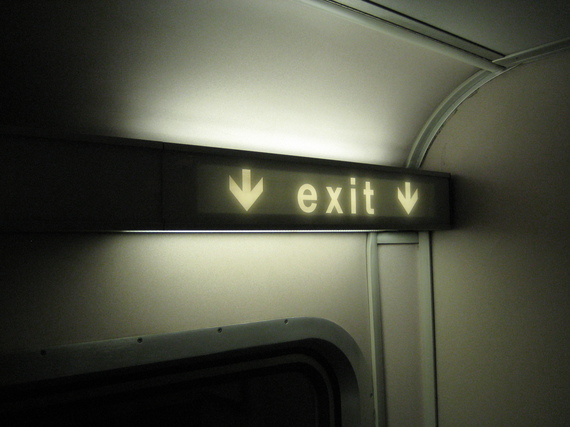 So, I ask the question. Why don't you leave?

"That would be the rational thing."

But, Julia knows she has her own shit inside, passed down from her own family and her family's family and generations beyond, shit that compels her to carry on, in this relationship.

And perhaps that's it. Many people have the fantasy that there is some definitive thing - some trait, some known deal-breaker -- that we can point to and say, "That's the thing that led me to end the relationship." In reality, as much as we think we know about why we choose who we choose, maybe the relationship, the draw to one another, is bigger than you or your partner -- that we have much less control over the outcome than we like to imagine.

It is much easier to point to our partner when trying to identify the source of relational conflict. When it comes to understanding our own unconscious pulls that lead us to react -- withdraw, prod, stir up, step back, attack -- the task is, well, impossible, without others -- partners, friends, therapists -- who can help us recognize our enactments.

We each have a foundation of experience -- beginning from our first breath -- that impact the ways we understand ourselves, our relationships and those we love. In fact, it is only through our relationships that our deepest fears and desires can find their shape, for it is through our interactions with those we hold dear that we feel safe enough to let loose our internal demons.

Regardless of whether you choose to stay in or leave this relationship, your unconscious feelings will find a way to speak up, which leaves you to decide: With whom do you want to explore the deepest aspects of your self?

When I asked Julia the question about what would lead her to end the relationship, her answer was simple and profound.

"The relationship will be over when I'm dong working through this, when I've worked through this unconscious pattern."

Perhaps romantic relationships are simply a process: A discovery of one's self, of one's partner and that third character -- the relationship itself, that begs that its story be played out. Until, one day, it isn't.

* Details have been changed to protect confidentiality

Psyched is conducting a research survey for our next piece on dating. Please share our 10 question anonymous survey with singles you know.