Last week, I stumbled across this article about Joan Lunden daring to appear bald on the cover of People magazine. How incredible of her, I thought. I wish her the absolute best. She has a rare and aggressive form of breast cancer and certainly has a grueling few months ahead. I applaud her for doing what is right for her and not shying away from the iniquities of this disease. 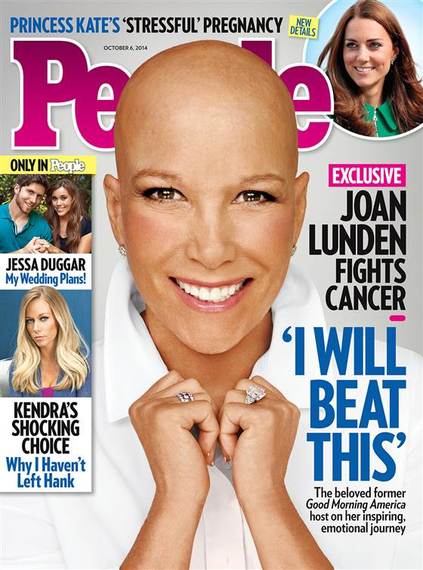 At the end of the article, it noted that Ms. Lunden would be kicking off Breast Cancer Awareness month (that's October, in case you've been living in a cave) with a special on the TODAY show. Specifically, it said: "We're kicking off Breast Cancer Awareness Month on Oct. 1 on the TODAY plaza -- and Joan wants you to join! If you have undergone treatment that resulted in hair loss, please join us for what we hope will be an empowering moment for women. Email todaypinkpower@gmail.com for more information."

So I did. I emailed todaypinkpower and -- after praising Ms. Lunden for her bravery -- gave a brief snippet of my history, that I was a 32-year-old new mom when I was diagnosed with Stage 4 breast cancer, that I've been bald twice, that I'd love to participate in an empowering moment for women (never mind that men get breast cancer, too).

To my surprise, I heard back pretty quickly. My email from todaypinkpower said, in part:

We are looking for survivors or women living with cancer to share in our bold and bald empowering moment. Would you be interested in joining Joan on the TODAY Plaza next Wednesday, October 1? Where are you located? Could you make it to our Rockefeller Center Plaza in New York City?

She then asked for more information: my age, location, and phone number. Oh, and could I also send a current photo.

In my crazy head, I started wondering how we could get coverage for Quinn if I was going to the TODAY show NEXT WEEK. What would I wear? Could we afford a plane ticket? Would NBC pay for that? I was getting ahead of myself, I knew, but I was caught up with the idea that a platform as huge as TODAY might start to pay attention to stories like mine. At the very least, I thought the photo might be used in a montage of some sort about women who've "undergone treatment that resulted in hair loss." An "empowering moment," if you will.

So I sent in this photo, from earlier this year. I admitted it wasn't the most recent and made a joke about what a camera hog my 3-year-old is. (He's not.) 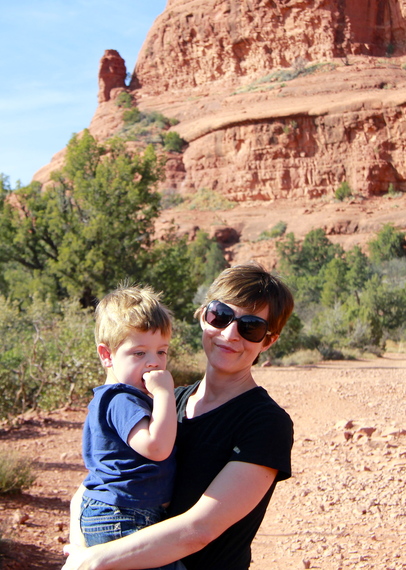 And then I got another reply email from todaypinkpower. It said:

Thank you so much for your response. We are specifically looking for women who can be bold and bald on the plaza for an empowering moment to support Breast Cancer. (emphasis mine.)

My heart sank. I'd been bald twice. That wasn't enough? Had I not been through enough shit to merit the "bold" stamp of approval from TODAY? I wasn't welcome because I wasn't BALD? What. The. Everloving. F*ck. I was saddened and livid and frustrated and then humiliated that I'd gotten my hopes up. I checked the message boards for the online support groups I belong to, and I wasn't the only one.

You see, many, many people with metastatic breast cancer do not lose their hair. For many patients, especially if their tumors are fueled by hormones (which is the majority of breast cancer patients), broad spectrum chemo is a last resort used only after bone-strengthening treatments, anti-hormonal agents, and other targeted treatments stop working. None of those other treatments cause hair loss. Neither do newer, targeted chemotherapies like the one I'm on. A lot of us with Stage 4 have our hair.

That doesn't mean we won't die from this disease unless researchers come up with something better soon. We face our mortality every day, live with side effects that range from mildly annoying to debilitating, and an estimated 40,000 people will die of MBC in the U.S. this year, and yet, metastatic breast cancer gets less than FIVE PERCENT of breast cancer research dollars.

I tried to look at it from a producer's point of view. A sea of bald heads would surely make a far greater impact on television than a group of people wearing pink. And of course, this seemed to be more about ratings than actual support or empowerment or -- God forbid -- education. That didn't make me less upset about it.

Maybe this was about solidarity with Joan Lunden. I tried to put myself in her shoes. How would I have felt if a bunch of women with hair came out to support me while I was bald? Oh, wait. I experienced that. It felt fucking amazing.

Fueled by our frustration and heartache and, yes, fury over the responses we were getting because we weren't BALD, a lot of us wrote todaypinkpower back to explain how gutted we felt by her response, by TODAY's approach to October, by the fact that a lot of women are getting left out of the conversation, by the media perpetuation that you must LOOK sick in order to BE sick. Here we go again and the month hadn't even begun yet.

In what I think counts as a teensy tiny victory, last Friday many of us non-bald "metsters" received follow up emails from todaypinkpower letting us know they would still love to have us join after all, and if we were interested, here were the updated details. We just had to wear our pink.

I get it that this is television. I do. And not everyone wants a segment on metastatic disease with their morning coffee. It's not entertaining. I know that. I live it.

I didn't get to fly to NYC to tell my story, but was ultimately invited to share by a senior producer at TODAY because dozens of us spoke up when something wasn't right. When we are loud enough, our voices are heard. Slowly, the conversation about what metastatic breast cancer is and how we're going to address it is beginning, and the face of "awareness" is changing. I am honored and humbled to be a part of that progress.

An earlier version of this post appeared on my blog, www.boobyandthebeast.com.