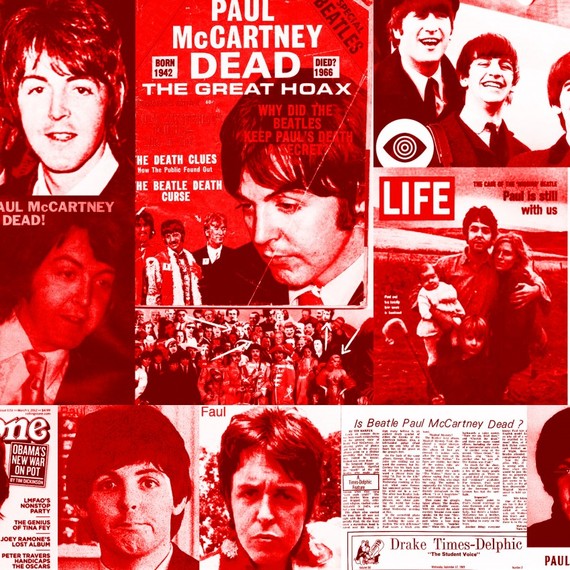 Make me a Viral!!

No - this is not a spell from a Harry Potter story or the theme from the latest zombie movie. Rather, it is an often-heard demand mantra in marketing circles as brands try to replicate the share power of cute cat videos; weird dancing babies; nutso behavior and crazy politicians.

Let's set the stage by looking at a list of the top 10 viral videos of all time - which, no doubt, has changed by the time you read this...before anyone knee-jerks me:

Top 10 Viral Videos of All Time

"Charlie Bit My Finger -- Again!" is the all-time winner.

So what exactly are we talking about?

1. Of, relating to, or caused by a virus （a viral infection）
2. Quickly and widely spread or popularized especially by person-to-person electronic communication （a viral video）

And, of course, the go-to source of our age, Wikipedia, provides this definition of viral marketing:

Viral marketing, viral advertising, or marketing buzz are buzzwords referring to marketing techniques that use pre-existing social networking services and other technologies to try to produce increases in brand awareness or to achieve other marketing objectives (such as product sales) through self-replicating viral processes, analogous to the spread of viruses or computer viruses (cf. Internet memes and memetics). It can be delivered by word of mouth or enhanced by the network effects of the Internet and mobile networks.

Bottom line - like any good virus, our new-age virus is really all about human contact and sharing...N.B.: Digital social networks...despite the full-on Digibabble...do not create viral success; they simply make it more efficient.

Let me set the second stage by sharing some incredibly powerful examples, from the last century (and I can go back millennia), of the exponential lift that occurs when a story/event/occurrence is shared and shared again, almost meeting Webster's tight definition of VIRAL ("quickly and widely spread or popularized especially by person-to-person"). You will notice, however, that I am missing the "electronic communication" modifier - now truth be told, we had in order of development phones, radio, telex, TV and fax - and, of course, the constant was people.

Wall Street has always been famous for its dark humor. In the 1980s, pre-digital, there was one dominant joke a day whose "infection" began in New York in the early morning and by evening had gone around the world - across industries; social strata and gender.

And an example of sharing power, the Bubble Yum debacle of the summer of '71 - every marketer's nightmare... 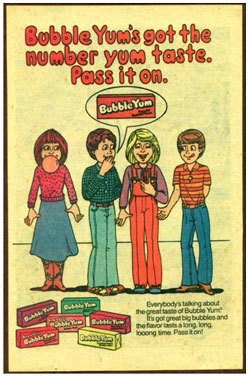 Of course there was the famous "The War of the Worlds" radio broadcast of Orson Welles in 1938 (listen here). He didn't know anything about Viral, but damn did he scare a nation of people. 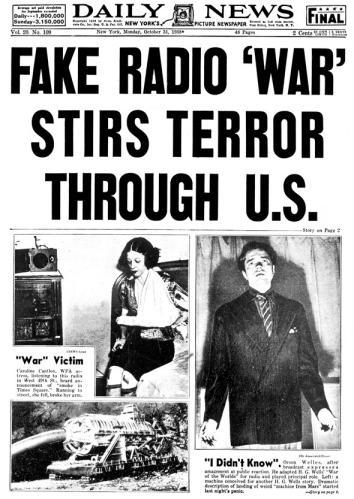 But I save the best for last:

A Viral (who knew!) that I participated in, as a sharing node (who knew!!), engaged with as an interested party (who knew!!!), debated, added to, agonized over - in other words, participation, sharing, engagement, UGC - an award-winning campaign...

"Paul is dead" is an urban legend (or is it?) and conspiracy theory suggesting that Paul McCartney of the Beatles died in 1966 and was secretly replaced by a look-alike.

Fall of 1968 - Rolling Stone reported that someone had approached the magazine with a list of clues that Paul McCartney was dead. Rolling Stone dismissed the story at the time because "'the trouble with his death cry was that too many people had seen Paul alive and it was the same old Paul...' But the rumor persisted and led at least a few inquisitive people to examine their Beatles albums and begin playing their records backwards."

September 17, 1969 - The story spread through college newspapers...the earliest piece was by Tim Harper, whose article appeared in the college newspaper of Drake University in Des Moines, Iowa. "Harper later claimed he was writing for entertainment purposes only, and said he got the information from a fellow student, Dartanyan Brown. Mr Brown is said to have got the story from a musician who had heard it on the Californian west coast, and that he also read the story in an underground newspaper."

September 23, 1969 - The University of Illinois' student newspaper, the Northern Star, picked up the story and ran it as an article a week later, as did other college newspapers in that part of the country.

October 12 1969 - The story was broadcast by a radio station in Detroit when DJ Russ Gibb received a call about the rumor and look-alike claim and the subtle hints to it in Abbey Road and other Beatles albums.

October 14, 1969 - The article that did the most to propel the "Paul is dead" rumor was written by a University of Michigan student named Fred LaBour. LaBour's article appeared in the October 14, 1969, edition of the Michigan Daily, the University of Michigan's newspaper, just two days after the call to Russ Gibb. Faced with the task of writing a review of Abbey Road, LaBour wrote a tongue-in-cheek obituary of the Beatles...Many of the elements of the rumor that have been repeated countless times were products of LaBour's imagination. He created the identity of Paul's replacement, William Campbell, and he asserted the walrus was an image of death, stating "Walrus is Greek for corpse."

October 19, 1969 - Shortly afterwards, Russ Gibb coproduced a one-hour special called "The Beatle Plot," giving the rumor greater prominence; by then it was well on its way to becoming a national, then international, talking point, inspiring fans to pore over their albums for further clues.

October 21, 1969 - "Roby Yonge, a disc jockey at New York radio station WABC, discussed the rumor on the air for over an hour before being pulled off the air for breaking format." Recycling many of the "clues" from the previous sources, he also contends that a research team of 30 students at Indiana University has been put on the case. Yonge plainly states that some of the clues only emerge "if you really get really, really high...on some, you know, like, mind-bending drug," but this proviso didn't seem to undermine his confidence in the shaky web of connections.

October 1969 - Rolling Stone ran an article called "One and One and One Is Three?" in late October, explaining how the rumor got started and discussing some of the clues.

Halloween 1969 - "Broadcast on Halloween night, 1969, on Buffalo, NY's WKBW, the show [employed] several of the station's DJs, who constructed a detailed and dramatic narrative of Paul's death."

November 1969 - The New York Times ran its second article on the persistent rumor in early November, this one titled "No, No, No, Paul McCartney Is Not Dead."

November 7, 1969 - The rumor became widespread when Life magazine tracked down Paul and photographed him - the cover story "Paul Is Still With Us" helped the rumor begin to die down.

November 30, 1969 - "F. Lee Bailey, a famous, high-profile U.S. trial attorney known for defending controversial clients..., became involved in the action with an hour-long TV show cross-examining some of the students who first offered the claim" and the show was broadcast on WOR-TV station in New York.

1970 - The Beatles all denied...According to Ringo, "It's all a load of crap." When asked if he had intentionally placed any of the clues, John denied it in similar terms, "No. That was bullshit, the whole thing was made up."

1993 - Popular culture continues to make occasional references to the legend, and McCartney himself poked fun at it with a 1993 live album titling it Paul Is Live, with the cover parodying clues allegedly on the cover of the Beatles' Abbey Road album.

Summer of 2005 - A package arrived at the Hollywood offices of Highway 61 Entertainment from London with no return address. Inside were two mini-cassette audio tapes dated December 30, 1999, and labeled "The Last Testament of George Harrison." A voice eerily similar to Harrison's tells a shocking story: Paul McCartney was killed in a car crash in November of 1966 and replaced with a double! British intelligence MI5 had forced the Beatles to cover up McCartney's death to prevent mass suicides of Beatle fans.

August 2009 - WIRED magazine in Italy featured forensic scientists proving Paul McCartney was replaced in 1966. A scientific team in Italy consisting of Francesco Gavazzeni and Gabriella Carlesi "conducted a biometrical analysis of Paul pre and post 1966. The scientists saw discrepancies in the facial features that could not be accounted for by error or plastic surgery."

March 2015 - "Fake news sites claimed that Ringo Starr had admitted that Paul McCartney really did die in 1966, and that the group had used a replacement for the rest of The Beatles' recordings. Of course, this was picked up by a few legitimate websites, but soon debunked."

And the rumor beautifully lives on with the ease and reach and efficiency of the Internet.

Paul-is-dead websites are plenty and, as I checked, many of the postings are as current as my writing:

http://plasticmacca.blogspot.co.il/2009/09/paul-mccartney-is-dead.html - a blog dedicated to analyzing the different aspects of the rumor

http://www.mirror.co.uk/usvsth3m/7-completely-legit-signs-paul-5262843 - seven signs proving Paul died in 1966 and was replaced

www.ispauldead.com - features a detailed look at all of the album cover clues

http://invanddis.proboards.com/ - a community of believers discuss the theory

I wore out my album playing it backward, agonized over the album covers with a magnifying glass, spent hours discussing and debating, saw the one-and-only F. Lee Bailey broadcast, wrote letters and notes and collected everything I could find...I was about 15 or so and here I am still writing about it and here is a community still obsessed with the story...and I still wonder if the Beatles weren't behind it all.

Does anyone honestly think that 40 years from now anyone will care about Charlie and his biting issues? A year from now? Six months?

Not to disparage Charlie, but I have watched people's expectations of and declarations about viral drop - to me it's about millions - today if a handful of people share, we declare victory - a sad reflection on "The War of the Worlds" or Paul McCartney.

Make a Viral? A real Viral that will infect minds...affect behavior...engage hearts...Think of people, relevance, interest...like anything digital, if it can exist on its own, it will be exponentially more powerful with the lift and engagement possibilities of technology.

Think of my prior-century examples and riff on them in today's age - in fact, you can find many examples....feel free to share!