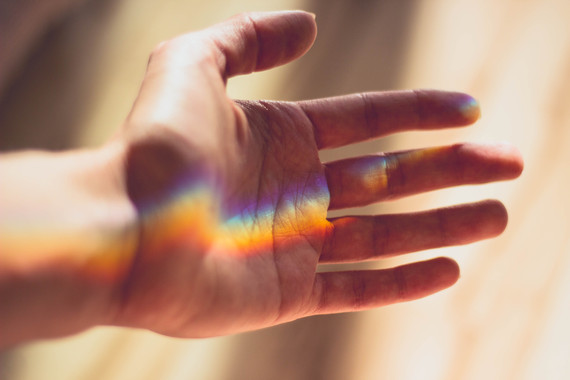 We mourn, we celebrate, we come together. This month is Pride Month, to honor the 1969 Stonewall Riots in Manhattan. June 12th was also Loving Day, to celebrate the day in 1967 when the US Supreme Court put an end to laws that prohibited interracial marriage in Loving v. Virginia. It also happened to be Anne Frank's birthday and the day that Medgar Evers was assassinated. And on that same day, many people lost their lives and their loved ones in the unspeakable tragedy in Orlando. When the Paris attacks happened in 2015, I wrote about them as well, lamenting the senseless violence, and dreaming of a light in the darkness, a glimmer of hope, a candle to lead the way.

After I heard about the attack in Orlando, I posted my thoughts on Instagram, and then stepped out to do a few errands in San Francisco. The first person I saw in the elevator, a stranger, had with him a dog excited and ready to go for his walk. I asked if I could pet his dog, and then bent down and looked at his adorable wide-eyed French Bulldog face. I said, to the dog, to the man, to myself, out loud, "it's really good to see such a beautiful face on a day like this." I choked back a tear as I said this, looking into the dog's eyes as I held his face in my hands. It was the first thing I had said out loud since I had sent that post and had read the news, and the words came out strained with heartache, tinged with grief and sorrow.

I then stood up and looked at the man, and he looked back at me. I couldn't believe what he said next. As it turns out, he was a gay man from Orlando. I told him I was going to the vigil that evening in San Francisco, and he said he was too. We said we would see each other there. And then we stood there as our elevator made its way to the lobby, and held a moment of silence together, looking at each other, eyes watering. I sent my love, thoughts, and prayers to his loved ones back home in Orlando, and in my mind, had a vision of a better world. We were two humans (and a dog), holding space in that moment. We were the same, we felt the same, and no words were needed for complete and utter understanding, shared despair, and connection between two strangers in an elevator.

When we reached the lobby, I walked out of the elevator and waved to the man and his dog as we said our goodbyes. I don't know if I'll ever see him again, but I do know that in that miraculous moment in time, minutes after I had written that post, that we stood together, that we were a metaphor for something larger, something beyond any one person, any one group. Hate could not take away what we had built in that instant. We had never met before and might never meet again, but somehow, I was reaching out, and so was he. And there we found ourselves, standing there together, two total strangers, in a shared recollection of humanity, love, tragedy, and perhaps, hope for a future where something that like isn't just a coincidence. Or at least where we can turn something senseless or random into something good, where something of light can be born out of the embers of hatred and fear.

The day of the Orlando attacks, President Obama said, "in the face of hate and violence, we will love one another. We will not give in to fear or turn against each other." We must work together to end such senseless violence. We must learn to choose love, not hate. In a recent TEDx talk I gave, I spoke, holding back tears, about how people die everyday due to fear and hate, and that maybe they always will. And that this haunts me. That I am tormented by the trauma, the injustice, the abuse, the racism, the sexism, the bigotry, the devastation. So what can we do?

My conversations with people around the world, like the one I had in the elevator, have shown me that the illusion that we are separate, that we are not all connected, is the cause of most conflict. As Paul Farmer says, "the idea that some lives matter less is the root of all that's wrong in the world." And the salve is connection, and action. Today, have a conversation with someone. Listen to them, hear about their struggles or the discrimination they have faced, their resilience and their bravery, what their life is like, and how underneath it all, they are not so different from you.

There are countless acts of violence against others every day. And yet there are also countless beacons of hope, hints of solutions, or at least reprieves, shining little echoes of beauty, amidst the bewildering storm of questions and confusion. Ken Tanabe started the Loving Day Project, to continue the national dialogue about civil rights. The Pulse Tragedy Community Fund has already raised thousands to support the community. Contact your local representative to ask about ending gun violence. Donate blood. Start a project or join a cause that makes you feel alive, that gives something to others that you would want given to you. Honor those who fought for the rights that you hold dear. Remember those who have made the ultimate sacrifice simply for being who they are.

Because Desmond Tutu and Martin Luther King, Jr. knew that to stay neutral is not enough. That injustice anywhere is always a threat to justice everywhere. MLK Jr. also believed that while the arc of justice, of that moral universe, is long, that it does indeed bend towards justice. But we must be the ones to bend it so. We must act. Dr. Jane Goodall remarked that "what you do makes a difference, and you have to decide what kind of difference you want to make."

What does it take to make a stand against violence, fear, and hate? What difference will you make today? What small action can you take to support the equality, rights, dignity, voice, and agency of another?