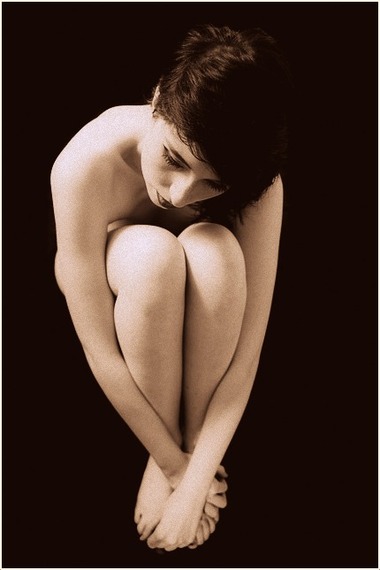 In case anyone missed it last week, a woman in Los Angeles took a compromising photo of another woman in her gym locker room and shared it on social media. The woman who snapped the picture is an adult woman nearing her thirties. She's also a Playboy model. She captioned the photo along with a selfie of herself appearing to laugh over it.

Though I'm still unsure as to what the Playboy model thought was so laughable about the woman's body, I feel a need to say a little something about this incident. Obviously most people will see an act that was cruel and disrespectful. No doubt. But I see something more here.

In regards to the woman who had her privacy violated, I saw a brave woman who made an effort to go to the gym and was obviously secure enough with her own body to walk around the locker room naked. I'm not even that secure about my body. And she was shamed for it. No - I take that back. Someone attempted to shame her. The only person who ended up being shamed was the person who shared and captioned the photo.

There are much more important stories going on in the world, many of them involving the tragic loss of human life and human suffering. But in the midst of these serious world problems, it seems we can't get rid of the superficial body-wars. What's worse is it's happening to women by other women.

As the mother of a daughter growing up in this world, the core of this incident does bother me. We all have self-esteem issues. Even Playboy models. We all get insecure. It's important to understand why it is we sometimes feel less-than in the body department. What are we comparing ourselves to that causes negativity about the way we look?

I'm sure this Playboy model wasn't the first to be a "mean girl" and body-shame someone she perceived to be less attractive or somehow not worthy of respect because she didn't have a body that's considered socially acceptable enough to flaunt. Somewhere along the way this woman who became a model must have been convinced that there is only one way to look in order to be considered attractive. This is nothing new.

Many women make careers out of their appearance and often appear nude to make money - but somehow it's implied that the rest of the female population who don't look like the classic centerfold shouldn't be as proud of their own bodies.

Well, I hate to break it but there are many women I've met in my life who don't look the same as Playboy models and they are some of the most confident, self-loving women you'll ever meet. They're radiant and gorgeous. They don't play into the superficial bullshit.

Now, there may be lots of women who are quite happy making their looks the main focus of their lives. No one is stopping them. They shouldn't be shamed either. Live and let live, right?

Only women themselves can shut down this strange obsession with how the female body is supposed to look. The women out there raising daughters and sons, or who are working in the very beauty industries that fuel a lot of the perceptions women have about their own bodies can help out with this.

If you have a healthy, functioning body that enables you to live life and do all the physical things you want to do, you should consider yourself to be extremely lucky and most certainly grateful. Some people don't have the luxury of a body that functions as it should - much less the luxury of worrying about what it looks like to everyone else.

As a woman, I'm disappointed when I see stories like this. It could have been any one of us in that locker room being laughed at. And I'm still not sure what the joke was. All I saw was a confident woman at the gym minding her own damn business.

This just seems to be another lesson for women that we still have a lot of work to do and we need to be on each others side more so than ever.

When we disrupt each others boundaries and proceed to attack based on how we look, we're only showing weakness. It's often those with the most insecurities that are quick to break down someone else. It distracts from the true task at hand, which is improving your own energy and living your own life in a meaningful way that doesn't hurt others.

When women work together, we are strong. When we break each other down, we are weak.

Let's continue to move on as women, learning from our mistakes and educating the next generation accordingly.

More from Michelle: How To Stop Body Shaming (And Mind Your Own Body Business)