In 2008, British model Katie Piper was raped after she refused to have sex with her new boyfriend. Two days later, a man threw a cup of industrial-strength sulphuric acid on her face, permanently disfiguring her and leaving her blind in one eye. It later emerged that the man had been hired by the boyfriend to attack her.

Piper's tragedy is just one of the many horrifying stories that can be found on "When Women Refuse" -- a new Tumblr page that's documenting news stories about what can happen to women who rebuff the sexual advances of men. 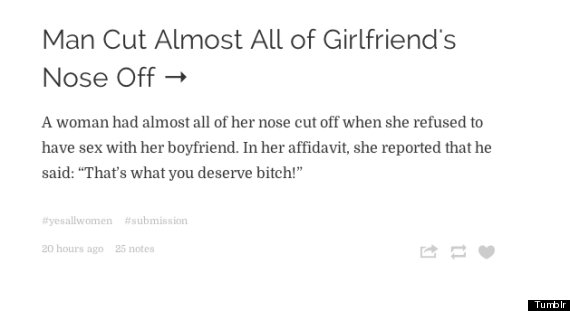 The page, which was launched Monday by author and blogger Deanna Zandt, was started in response to the killing spree last week in Isla Vista, Calif., in which six University of California Santa Barbara students died. The murders were allegedly committed by a man who had previously cited his hatred for women as a reason for the attacks.

Zandt was inspired to create "When Women Refuse" after writer Kate Harding began curating links to similar stories on her Facebook page. She teamed up with Lainna Fader, Kate Tull, Kathryn Peters and Shauna Gordon-McKeon to create the blog. Their mission is to prove that Rodger's mass murder was not an anomaly, but instead part of a larger cultural pattern of violence against women.

"One of the things we're hoping people take away from this, however they're coming to the conversation, is to understand that these are not isolated incidents," Zandt told The Huffington Post in a phone interview. "These things happen way more than our cultural consciousness [will recognize]." 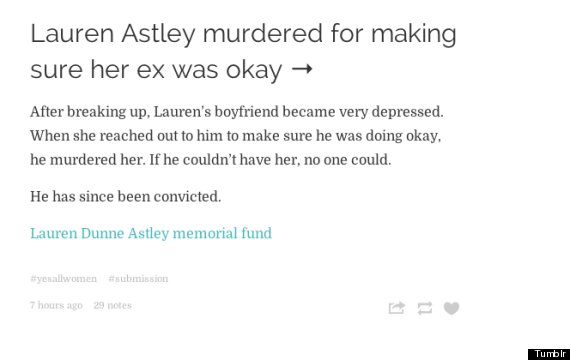 "After the horrific tragedy of the shootings at UCSB on May 23, the Internet responded with the hashtag #YesAllWomen, to start a conversation around the fact that while not all men commit acts of violence, all women are afraid, and rightfully so, of gender-based violence," the administrators of "Where Women Refuse" wrote on Tumblr. "Many people participating in these conversations seemed to point to the UCSB shootings as an isolated incident, the work of a mad man who had nothing to do with reality. But the reality for many is that women denying sexual advances to both men they know and don’t know is often fraught with violent results."

The Tumblr page has sparked a lot of buzz this week in both the news media and social media sites.

I already knew misogyny was a systematic problem, but wow... these stories are terrifying. http://t.co/H7VTdfSebe

In case you thought that last Friday's shooting was a rare case... http://t.co/hi6Koehsln

One of the most important blogs you will ever follow http://t.co/P4FKJfoTqC

Zandt told Think Progress that the response to the page has been "really positive" from both men and women. She added that while there is still a lot that needs to be done to address gender-based violence, the Internet has played an important role in recent years in shedding light on the issue.

“The fact that this conversation is happening now is a huge indicator of the structural connectivity work that online feminists have been doing for years,” Zandt said. “We’re in a different place than we were five years ago… We’re creating a space for these discussions.”